Every now and again the Star Trek franchise dips into some fairly dark territory with heavy subject matter. Audiences got a bit of a taste with that in The Next Generation‘s ‘Best of Both Worlds‘ with Picard’s assimilation into the Borg, but ‘Chain of Command’ delves into even murkier waters as Picard becomes a Cardassian prisoner of war and is brutally tortured for information. ‘Chain of Command’ doesn’t hold much back in how his interrogator dehumanizes Picard and tortures him both physically and psychologically, attempting to break through Picard’s exterior. This two-parter also speaks to just how important Picard is to the crew of the Enterprise as its captain and why he is the best man for that position. 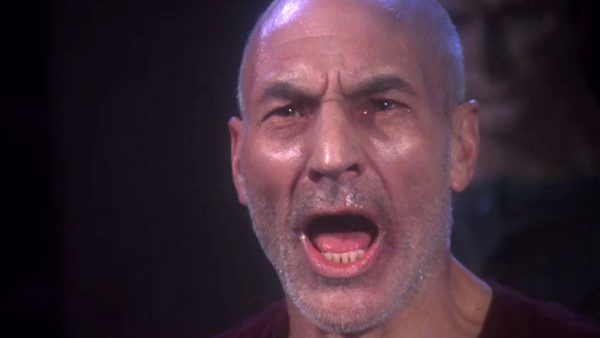 When Picard, Crusher and Worf are ordered to go on a secret covert mission into Cardassian territory to uncover a bioweapon program, a new captain is given command of the Enterprise in Picard’s absence. However, it turns out it was a trap to specifically lure Picard into as the Cardassians believe he has the defense plans for a vital system they want and he is captured. Once in their clutches, he is tortured by a Cardassian interrogator for information and put through hell even when it becomes clear he doesn’t have the plans. With Picard captured and the new captain of the Enterprise being particularly dismissive of Riker and some other members of the crew, they have little time to rescue Picard before he comes to any more harm.

‘Chain of Command’ features some of Patrick Stewart’s best work as he suffers through Gul Madred’s interrogation tactics. He starts off defiant to the Cardassian’s wishes, but his strength is soon tested as he’s put through an ordeal quite different from anything he’s encountered previously. Stewart completely sells the withering fire in his spirit as he goes through some brutal methods despite the front he puts up at times. It gets quite intense at times as Picard is stripped naked and hung from a hook overnight or is implanted with a device that generates pain in any nerve throughout his body. Stewart and the episode writers Jeri Taylor and Frank Abatemarco worked pretty closely with Amnesty International, the organization that specializes in human rights abuses throughout the world and which Stewart is an advocate for, on the treatment of prisoners to make Picard’s experience as real as possible for viewers. Stewart himself agreed to film the nude scene on a closed set in order to make the episode more authentic for fans as well as his own performance. 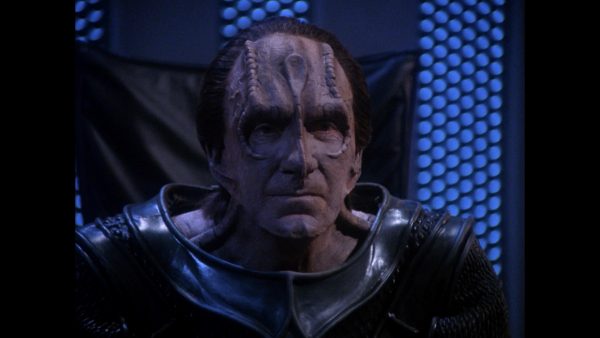 His captor, Gul Madred, was played by Tron‘s David Warner, an actor who was no stranger to Star Trek after starring in Star Trek V: The Final Frontier and Star Trek VI: The Undiscovered Country in two different roles. Warner’s casting itself is a funny story as another actor dropped out of the role at the last minute and Warner filled in, but, having no time to fully learn his lines when cameras started rolling, read most of his lines from cue cards held off camera. You wouldn’t be able to tell though through Warner’s performance as he just oozes what a despicable being Madred is as he tries stripping Picard of his identity, referring to him as ‘human’ instead of his name or title, and plays with Picard psychologically with his lies. In particular is a homage to George Orwell’s classic dystopian novel 1984 as Madred tries convincing Picard to say he sees five lights when there are in fact four, leading up to one of Picard’s most memorable moments in the series. He always stays in control, save for a couple moments where he reveals a little too much about himself that Picard is able to use to his advantage even at the cost of more torment. The relationship is quite captivating to watch.

‘Chain of Command’ also serves as some great set-up for the next Star Trek series, Deep Space Nine, which premiered just a month after these episodes. Though the Cardassians had been introduced already and been in a couple episodes, this served as the full and proper introduction into their methods and history as Gul Madred relayed how their culture became such a militaristic empire. Audiences got a better understanding of what this race was capable of and how they were different from other enemies to the Federation. Unlike the Klingons or even the Romulans, Cardassians didn’t place much stock in honour or compassion and followed a strict doctrine that saw other races as completely beneath them, going to great lengths to dehumanize them to their children. The two-parter definitely served as a good set up for what Commander Sisko and his team aboard DS9 would face coming to the Bajoran sector. 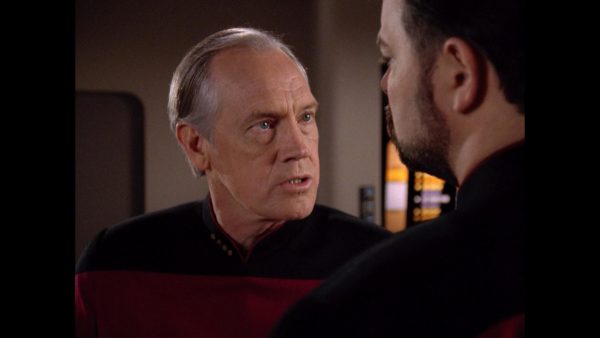 While Picard was held captive, the Enterprise had to contend with another antagonist of sorts alongside the Cardassians. Captain Edward Jellico was in command of the ship for the interim, but wasted no time in establishing his position aboard the Enterprise, going so far as to change Picard’s ready room into his own. Despite Jellico’s seemingly friendly manner and his habit to refer to his officers on a first name basis, Jellico is a fairly controlling figure who prefers strong arming the Cardassians as opposed to trying a diplomatic approach first, micromanages nearly every aspect of his ship and doesn’t think much of Riker. His first impression of people is usually his last and his blunt approach to captaining – with his trademark “Get it done” a direct counterpoint to Picard’s “Make it so” – does little to ease the crew to the change in command. His time on the Enterprise just highlights how patient, calm and intelligent Picard is and the way he inspires loyalty and trust among his crew.

‘Chain of Command’ is another great two-parter for Picard that examines the ordeals prisoners of war go through and the horrors of torture. Stewart gave a terrific performance and fought to keep in some of the harsher elements of Picard’s treatment, ultimately making it a more authentic struggle. While serving to set up Deep Space Nine and the Cardassians as the main antagonists of that show, it also tells a captivating if painful Picard story.