Just like this month, February 1990 was plagued with storms with trees being uprooted, roof tiles being removed, flooding and worse.  The weather may have been making the country down in the mouth but on the gaming front things were doing much better and giving gamers a reason to smile.  Some of the cracking games that were keeping us occupied during these storms were….. 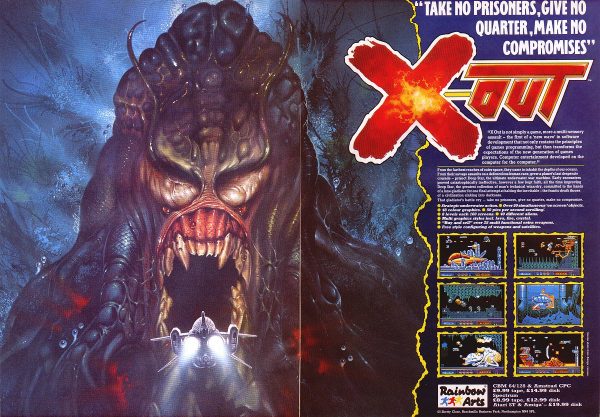 X-Out was a cracking good shoot ’em up available on all major home computers of the time from the Spectrum to Amiga and provided gamers with a lot more choice than the standard fare of this genre.  At the start of the game players got a certain amount of in-game money they could use straight away in the shop (manned by a creepy alien looking chap) to kit out their fighter submarines, these credits could also be used to purchase extra subs which served as lives.  The initial sub players started with was the cheapest and could carry 3 different weapons but as the game progressed more credits could be collected and used to purchase better subs that could carry more weaponry with the most expensive being able to carry a whopping 12 weapons.  Talking about weaponry, the game had masses of different weapons, including various missiles, three way weapons, lasers, orbiting auto turrets and the ever popular smart bombs.

Enemies came thick and fast with squadrons of puny one shot kills flying onto the screen quickly, less weak ships coming singularly or in very small units and a rock hard, screen filling boss at the end.  But why were we fighting them I hear you cry, well apart from shooting enemies being great fun the plot was simple, alien invasion.  Aliens had traveled to Earth from Alpha Centauri and made their base in the depths of our oceans and only the single pilot hired by Earth’s Project Deep Star could stop them.

X-Out earned a worthy 78% in Amiga Format and 90% in Sinclair User.  Look it up if you ever get an emulator.

Racing games were to 8 and 16-bit gamers what first person shooters are to today’s gamers, and it was an unwritten rule to own at least one.  In fact, in many cases a racing game magically appeared in your collection as if  planted there by a little gaming elf.  Racing games were all over the place but perhaps none stood out so much as the Outrun franchise, and in-particular Turbo Outrun.  These conversions of the arcade classics were beloved by all…..well…. most gamers.

Turbo Outrun took players on a thrilling race across the United States in a lovely Ferrari F40 convertible.  The race, against an overly cocky Porsche 959 driver, took players from New York to L.A through several different environments including snowy mountains, sun-baked deserts and rainy city-scapes, and no the roof dis not go up on the convertible when it rained.  As well as a race against the clock, players had to put up with policemen and speed bumps and other nuisances on the road, but if things got to tough there was always the turbo boost!

Players must have enjoyed racing in this red Ferrari (or monochrome Ferrari on the Spectrum) as there were several more titles afterwards.  Turbo Outrun race results were 70% in Your Sinclair and Amiga Format, and 79% in Crash.

Watch Steve Benway play Turbo Outrun (badly) on the Sega Megadrive in the video below.

This wonderful little platformer was released on the dominating 16-bit machines and follows our young hero, Axel, as he sets out on a quest to rescue his kidnapped girlfriend from the dreaded Dragon King.  Armed only with a hammer, Axel must navigate his way through a hazardous world, fight his way past numerous nasties and rescue his girl.

Although many folk thought Axel’s Magic Hammer was just a standard platformer, for me it was much better than most.  Enemies could be clobbered with the hammer but discover a power-up hidden behind some destructible blocks and the hammer could be thrown across the screen.

Despite a thoroughly entertaining platforming romp, the reviewers just didn’t feel it broke any boundaries and awarded it average scores, 56% Amiga Action and 67% from Amiga Format. 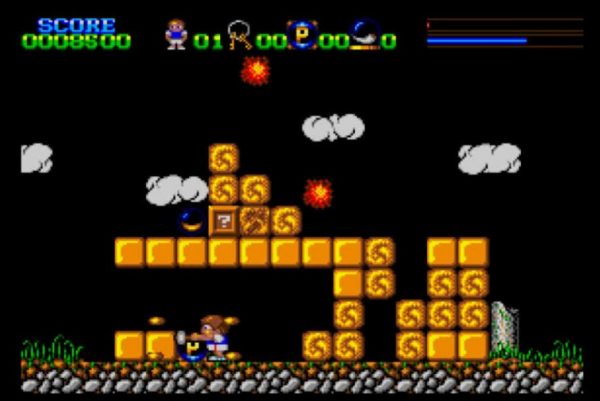 On the old 8-bit computers like the Spectrum and Commodore 64 there were a lot of publishing houses churning out budget games for £1.99 or £2.99.  Now, you may think that at such a cheap price the games wouldn’t be that good but there were so many absolute classics with Codemasters (responsible for the iconic Dizzy series) being one such publisher.  One of Cartoon Time’s (A label of Codemasters) entertaining little platformers arriving in newsagents back in the day was Wizard Willy.

Taking control of the titular Wizard Willy, players had to guide him through enchanted forests, dark and damp dungeons, and crazy battlements to rescue Fifi the Fairy from the Emperors fortress.  Along the way, players would have to collect a number of magical eyes which they would then use in the final battle.

The game featured cute big sprites and was pretty easy to play, it certainly came across as a game intended for younger players rather than for older teens but there was certainly worse games out to spend £2.99 on.  Gaming magazines awarded it very average scores with Crash giving it a below average score of 42%, Your Sinclair awarding it 68% and Zzap!64 giving it 53%. 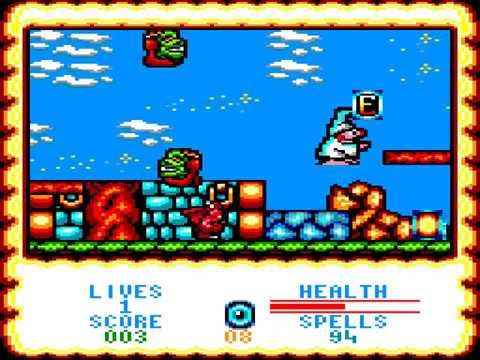 Wizard Willy on the Amstrad CPC464

Chase H.Q. was a conversion of the arcade game and it had gamers on nearly all the main home computers hooked (except the C64, as that version is rubbish).  Unlike several of my friends though, I wasn’t addicted to its racing charms and ramming delights, in fact I found some aspects downright frustrating.

Players take control of a police interceptor and have to track down a suspect among the multitude of other cars on the road, racing down motorways and weaving in and out of cars until you locate them.  Once found a few more precious seconds are added to the timer and it is up to the player to ram them repeatedly until their car stops and they give up.  Any collisions with other road users or objects at side of the road (and trust me you can’t help but collide with others) will cost valuable seconds and may even lead to running out of time before reaching the suspect.

There is also a choice of routes, although I use the word ‘choice’ loosely because if you miss the recommended route (recommended by a big yellow arrow) then you have to use all three turbo boosts to stand a chance of catching up.  Gameplay aside, the graphics on all platforms were well done and it did provide a good impression of speed.

Chase H.Q. made me tear my hair out but the reviewers seemed to like it with Amiga Format giving it 82%, Zero Magazine giving it 79% on the Amiga and ST, and Computer & Video Games awarding it hit status on the Spectrum with 97% and the Amiga and ST with 93%.  I tend to agree more with Zzap!64 who awarded it an average 53%.

You can see what Mr Benway thought of the Commodore 64 version in the video below.

So there you have it my friends, 5 games that UK gamers were enjoying in February 1990.  Of course, the year was only to get better but we will look at those next month.

SEE ALSO: Back in the Day: The Video Games We Were Playing in February 1980

As usual, a big thank you to Steve Benway for allowing us to use his videos, he has hundreds more gameplay videos and system reviews for a whole host of systems so subscribe to his channel and be edu-tained.