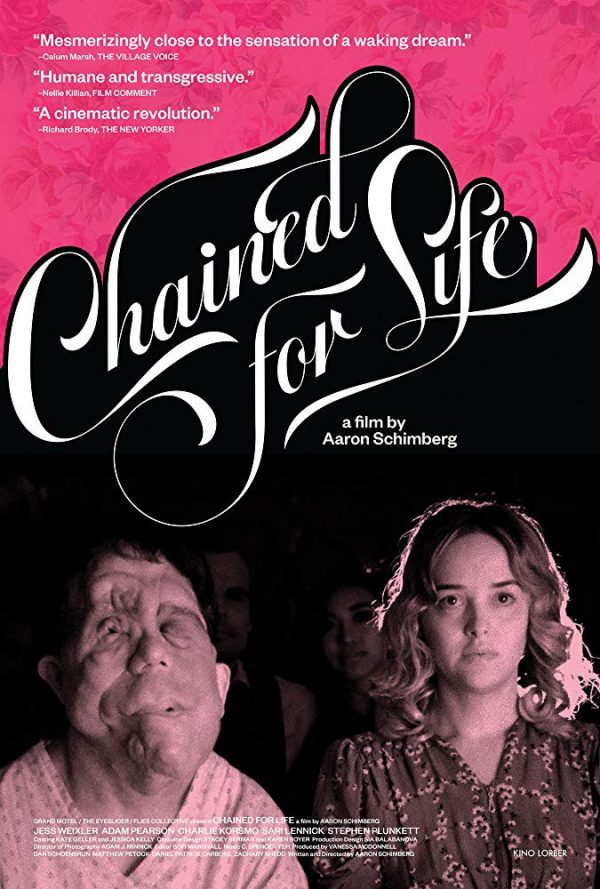 A beautiful actress struggles to connect with her disfigured co-star on the set of a European auteur’s English-language debut.

Director/writer Aaron Schimberg’s second feature film, Chained for Life, follows actress Mabel (Jess Weixler) as she works on the set of a new horror movie. This production is to be the first American film of European auteur Herr Director (Charlie Korsmo), and its themes and location (a doctor experiments to try and cure the disabled of their ‘imperfections’ in a hospital) reek of exploitative B-movies of a bygone era.

Soon enough, brought by bus are Mabel’s new co-stars, a group of actors, so often referred to as ‘them’ by the other cast and crew, due to their disabilities and disfigurements. Rosenthal (Adam Pearson), who has neurofibromatosis, is to be one of the stars of the film, with a big role opposite Mabel. We follow the ups and downs of the production, with all the subtle and less subtle acts of discrimination, alongside the blossoming friendship of Mabel and Rosenthal.

It doesn’t begin too rosy though for the pair. With the arrival of her co-star imminent, Mabel is clearly uncomfortable, practising how to greet him in the bathroom mirror as if she feels she must act differently around Rosenthal. Everybody else is doing it too, subconsciously or otherwise. In their acting, they only succeed in telling Rosenthal how he should feel, think and act, and how his own experiences are in fact not true. Babies and puppies could never dislike you, they claim, having never once lived a day in his shoes.

At one moment, Mabel is awkwardly showing Rosenthal her acting range. She acts sad and happy on cue. Then Rosenthal asks her to show empathy. She falters at this request, and he points out that it looks a lot more like pity rather than true empathy. This line encapsulates the treatment of Rosenthal and the other disabled and disfigured actors, by the rest of the cast and crew.

As the camera pans around the movie set, whether they are setting up for a new shot or having a break, the behind the scenes crew continuously deliver obliviously offensive remarks about their new co-workers. Schimberg’s script is a sharp and biting one with a memorable line around every corner. It is also infused with some great comedy throughout.

After their awkward first meeting, Mabel and Rosenthal begin to connect and their exchanges are the sweetest and funniest of the entire film. The chemistry of the two leads shines through, and it really helps that they both possess a sharp wit.

Elsewhere, in the evenings, the actors are left to sleep in the empty hospital wing whilst the rest of the crew sleep in a hotel. Outside of the confines of the production, the disfigured and disabled actors begin to express themselves freely, creating their own delightfully playful mini movies. Schimberg allows these new voices to be layered upon the horror movie we are watching being created, and Chained for Life diverts to a new interesting path as we intercut between this array of diverse stories. It is a glimpse of cinema as it could be.

Despite its runtime barely brushing the 90-minute mark, there is so much to dissect in this film that it will no doubt require repeat viewings. Schimberg’s film is a brutally honest look at the long history of mistreatment of certain groups in our society, and how this mistreatment is now normalised and systemic, not least in the film industry itself. Schimberg handles this topic with deftness and a dark satirical edge, brilliantly highlighting the stories of those so often ignored by the mainstream media.

Somehow in 2020, we live in a world where the new James Bond film has a scarred character as the villain. This sort of ugly connection being made between evil and disfigurement or disability has been much-maligned for decades, but it still pervades as a norm despite the criticism. Schimberg’s film on the other hand is a breath of fresh air. It is a deconstruction of this discrimination and a wonderfully effective movie in its own right.

Chained for Life opens the Fantastic Film Festival Australia and will screen in both Sydney and Melbourne on Thursday 20th February 2020. The Festival will run until Wednesday 4th March. For more information please check out the website here.