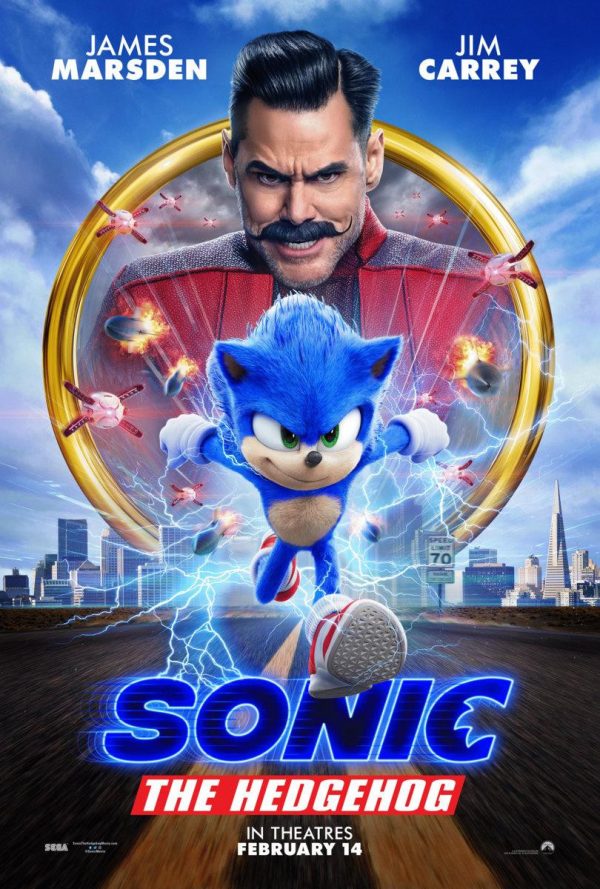 Nobody could be blamed for approaching a movie based on the beloved Sonic the Hedgehog video games with a sure air of skepticism.

Even accepting the typically low standards afforded to Hollywood’s adaptations of hit video games to date – though we’re starting to inch closer to genuine decency with recent offerings like Rampage and Detective Pikachu – it’s no secret that Sonic‘s development has been uncommonly strained.

And while Sonic the Hedgehog certainly isn’t a great movie by any stretch, it is a pleasant surprise, both in terms of how lovingly it embraces the video games, and how entertaining it is as a goofball family comedy. Live-action comedies which rely overtly on pint-sized CGI mascots don’t exactly have a great standing among audiences or critics – just look at Alvin and the Chipmunks or The Smurfs – but Sonic the Hedgehog is aided enormously by the charmingly daft personality of Sonic himself.

The character is presented less as cutesy merch-bait and more akin to an energetic teenager, and quite sensibly, the film shunts the (admittedly forgettable) plot to the periphery to focus on Sonic’s endearing wackiness.

More so than perhaps any other video game movie protagonist in history, Sonic truly holds a mirror up to his source appearance and persona. Despite some fairly uneven visual effects, he’s a dead ringer for his video game self, and thanks to both Ben Schwartz’s spot-on vocal performance and a knowingly silly script, the essence of the character feels thoroughly captured.

The plot is so paper-thin as to merit little mention here; as a child – yes, Baby Sonic briefly shows up here – Sonic is transported from his home to Earth, leaving him to spend his adolescent years in the sleepy town of Green Hills, Montana. After a lonesome Sonic accidentally generates an electromagnetic burst while speeding around a baseball stadium, the U.S. government attempts to track down the source of the burst, enlisting demented scientist Dr. Robotnik (Jim Carrey) to capture Sonic.

But Sonic isn’t alone; through shamelessly contrived circumstances, he’s joined by a human sidekick of-sorts, local sheriff Tom Wachowski (James Marsden). And by joining Sonic on his road trip to San Francisco to retrieve his lost golden rings, Tom is himself labelled a domestic terrorist by the authorities.

The great challenge of adapting video games to the cinematic realm has rarely been an aesthetic or tonal one, but how to take the oft wafer-thin stories of the medium and flesh them out sufficiently for even a 90-minute movie.

And on paper, Sonic the Hedgehog‘s story doesn’t exactly convince, so again, it’s smart that writers Pat Casey and Josh Miller opted to train the focus away from plot specifics towards character work, humour, and mile-a-minute action sequences. This movie’s tone strikes a shrewd balance that will certainly allow it to play well across a broad spectrum of audiences; much of the humour is clearly aimed at younger viewers, though it’s shot through with just enough self-aware snark to also appeal well above the kiddie market. It also doesn’t hurt that debuting director Jeff Fowler has filled the film to the brim with wink-wink Easter eggs sure to please the Sonic die-hards.

Is the end result particularly hilarious or clever? Not really, but it’s assembled with a surprising tonal coherence, emphasising the likeability of Sonic above all else, while serving up a number of free-wheeling, frenetic action sequences in the bargain.

More so than perhaps any other video game film, Sonic‘s set-pieces feel near enough ripped from the games – especially a third-act final battle with Dr. Robotnik where Sonic adopts the very specific battle strategy he employs in the games. Though the film’s modest-ish $95 million budget clearly placed a ceiling on the ambition of the action – as well as resulting in a sometimes excessive focus on human characters – these sequences succinctly underline how much love Fowler and his team clearly have for the video games.

It’d be remiss not to mention Jim Carrey at this point, whose casting caused plenty of double takes, given that he’s been hewing far away from broad comedy vehicles for many years now. And yet, this film gives him a riper-than-ripe opportunity to pull ’90s-era Carrey back out of the closet for another go-around, and he evidently relishes the opportunity to get zany-with-a-capital-Z.

A live-action Dr. Robotnik could so easily have been an abject, goofy disaster, and it was certainly a gamble for an actor of Carrey’s prominence to take on a role like this – opposite a CGI hero, no less – yet Carrey’s go-for-broke performance is unquestionably the film’s tangible live-action highlight.

His performance contributes further to the film’s overall unexpectedly oddness; despite being obviously mounted as a broader-than-broad family comedy romp, there is an overarching eccentricity to the film that can’t really be ignored.

This is a movie where Sonic gets involved in a bar fight – involving an hilarious, Days of Future Past-esque slow-motion sequence – and also where Robotnik gets his own delineated dance sequence, while casual jokes are made about both Hillary Clinton’s e-mails and Sonic’s butt-wiping etiquette.

It’s a film that inexplicably even manages to survive an unsavoury battery of unsubtle product placement; Olive Garden’s brand is invoked not once but twice in embarrassingly on-the-nose fashion. An attempt is made to hang a lampshade on the shameless capriciousness by shilling with a wink at the audience, but sadly, Wayne’s World this is not. And yet in spite of missteps like this, Sonic the Hedgehog gets just enough right and offers enough appealing set-ups for the inevitable sequel – make sure you stick around for the glorious mid-credits scene – that it’s easy to see how this film could kickstart a slew of effortlessly superior follow-ups.

The first great video game movie may still elude audiences, but Sonic the Hedgehog is nevertheless an encouraging sprint in the right direction.