March 2020 is a pretty depressing time right now but for 10 minutes or so let’s go back 30 years, to a time when the UK witnessed the Poll Tax riots, Alain Prost won the Brazilian Grand Prix for Ferrari, Labour won a Mid-Staffordshire by-election and the UK were playing some great games on home computers and consoles. 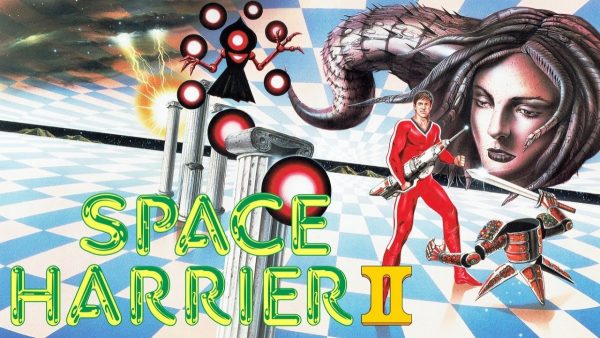 Space Harrier II, the sequel to the much loved Space Harrier, arrived on nearly all UK 8-bit and 16-bit home computers and bought more of the frantic, fast paced action that gamers loved from the original.  As with a majority of games of the time the plot was a very simple one, Harrier, our hero from the first game, is called to a planet overrun with strange creatures and must face these hostiles alone.

Players would guide their character across 12 checked landscapes, flying ever onwards into a never-ending background and would need to fight a variety of enemies that would approach from the front or rear and attempt to shoot or collide with Harrier.  Collision with these creatures or their projectiles would cause loss of life, but players also had to be aware of environmental features such as pylons and large rocks which would also cause the loss of a life should they be collided with.  Smaller environmental features such as trees could be destroyed, although collision with these would only cause our hero to stumble.

Space Harrier II performed quite well on the home computers with Computer & Video games awarding it 77% on the Spectrum and 78% on the Atari ST, Your Sinclair giving 85% and ACE awarding 819/1000. 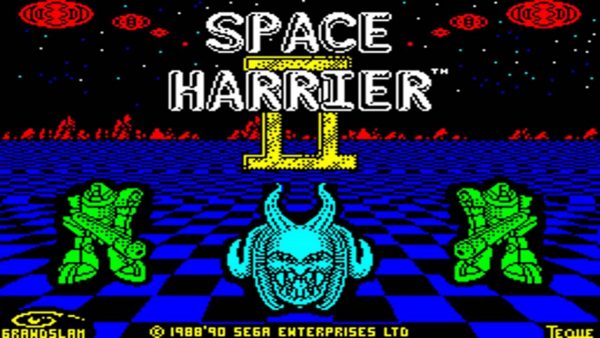 When Super Hang-On arrived on the Sega Mega Drive it wasn’t a new game, I had played it a couple of years beforehand on the Spectrum (curse those multi cassette loading levels), but it was an absolute gem of a motorcycle racing game.  It was going to be another year before Mega Drive gamers would get to play the ultimate arcade motorcycle racer that was Road Rash and Super Hang-On filled the void perfectly, almost as though the market had deliberately left the space open for it.

The game featured 4 difficulty levels across the four continents of the world with beginners set to try their hand at 6 stages across Africa.  Those thinking they were the bee’s knees could try the 18 stages that came with Europe’s expert difficulty but when it said expert they weren’t kidding.  As with a majority of racing games of the time, races took place against time even the slightest mistake costing a few seconds could see you out the race.

As well as the arcade mode, the Mega Drive edition featured a separate race mode where players went one-on-one against the AI, money could be earned by winning and then used to purchase better bikes.  Fortunately, this mode was supported by a password system so there was no need to leave the console on all the time.

Watch Steve Benway’s gameplay video below to see how good the game looked and why it earned the 96% from Computer & Video Games.

Super Cars is a top down racer that sees players hurtle round nine different tracks through 4 levels of difficulty.  There were 3 different super cars to drive but forget about the likes of Ferraris and Porsche, these super cars were the Taraco Neoroder Turbo, the Vaug Interceptor Turbo and the Retron Parsec Turbo and could be kitted out with power upgrades, armour plating and front and rear missiles.  To gain these invaluable upgrades players would have to win races and avoid the mud and oil patches on the tracks that would either slow the car down or make them spin out of control.

Top down racers weren’t a new idea, Codemasters had been making plenty of games of the genre for years, but by using a number of novel ideas wrapped up with good graphics and decent sound and music Gremlin created a game that was worth the 86% that Amiga Format awarded it. 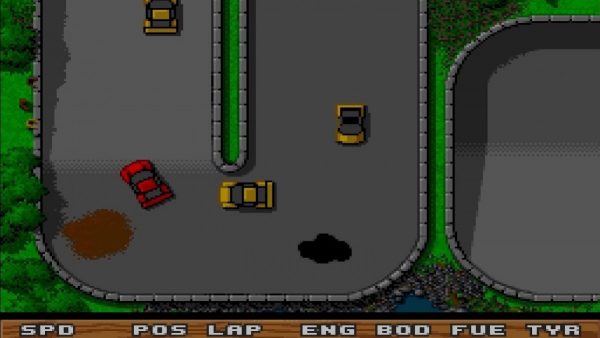 This horizontal scrolling shoot ’em up took players to World War 2 and put them in the pilot seat of one of America’s most formidable aircraft, the P47.  Players were taken through multiple levels and tasked with shooting numerous air and land based enemies.  To start with, the player’s P47 was equipped with just a single-shot cannon but this can be upgraded by shooting enemy helicopters and collecting the drop, weapons that could be collected included bombs and missiles.

Eight stages awaited players and each ended with a mega boss to defeat, including a tank, giant plane, battleship and train.  Defeat all these stages and you’re then tasked with doing them again at an increased difficulty.

P47 Thunderbolt was released on nearly all home computers of the day and earned an above average 71% in Crash magazine for the Spectrum and 80% in Amiga Format. 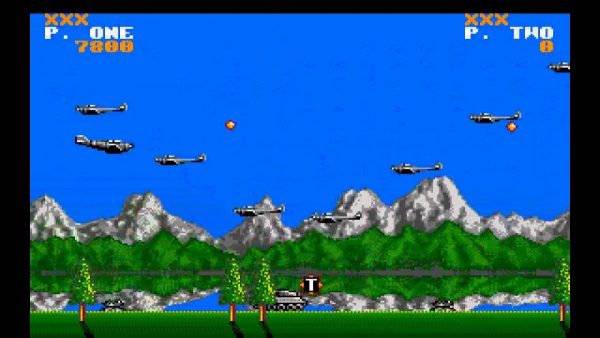 The Revenge of Shinobi – SEGA

This side-scrolling platforming sequel to the 1987 hit game Shinobi saw the reformation of the criminal organization Zeed.  Renamed “Neo Zeed”, this crime gang decide to take revenge on Joe Musashi and the Oboro Ninja clan by kidnapping his bride and killing his master.  It’s time for Joe to hit the streets again and rescue his bride.

Players had to guide Joe through eight districts battling various enemies using his fighting skills and shurikens.  Joe was able to use four special ninjutsu techniques which would be useful against the unique boss characters that made an appearance at the end of each level.  The final boss would be Neo Zeed himself and defeating him would see Joe rescue his bride and walk off into the sunset once more.

Steve Benway shows off his ninja skills in his The Revenge of Shinobi gameplay video below.

There’s no doubt in my mind that March 1990 was better than this month, I doubt very many of you disagree.  Though if you do feel like disagreeing, leave a comment below or join us on Twitter @FMyth_Gaming…

Thanks again to Steve Benway for allowing us use his Youtube videos, be sure to subscribe and start enjoying some of the 1000+ videos he has on his channel.

Until next month, stay safe!