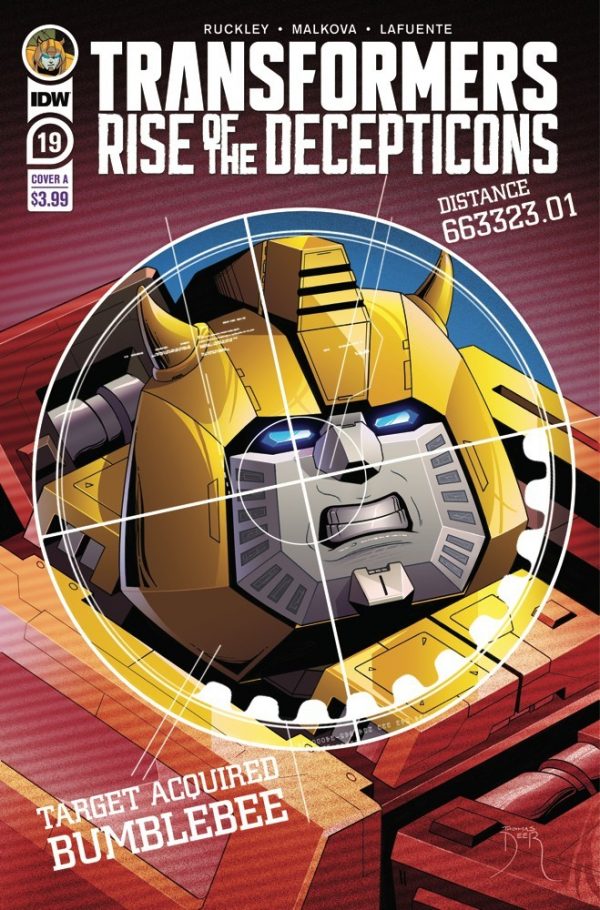 Over the last several issues of IDW’s Transformers, the situation on Cybertron has gone from bad to incredibly worse as Megatron’s latest plan to upend the status quo has caused the deaths of thousands of bots and a dwindling supply of energon, making it an optimal time for him to make his move. Transformers #19 marks an intriguing and fast-paced beginning to ‘Rise of the Decepticons’ as Brian Ruckley starts bringing many of the pieces together.

There’s a lot of story movement here as Ruckley jumps around between several groups of characters, from Megatron and his cabal, Orion Pax and Sentinel Prime and Bumblebee’s attempted murder. Ruckley balances all the scenes fairly well as he shows how everything on Cybertron is spiralling downward. The main plot centres on Megatron’s order to have Bumblebee killed and the yellow bot’s close call with a couple Risers who are some deep pulls in Transformers lore as Action Masters, transformers who are permanently locked into one of their alt-modes. With Megatron’s actions, Ruckley is really pushing the story forward now as Cybertron edges closer and closer to all-out war.

On the subject of Megatron, Ruckley does some pretty interesting stuff with him. The last few issues have seen Megatron’s leadership questioned – an act that rarely ever happens (from someone other than Starscream at least) – and that is seen here once again as Megatron plans the Ascenticon and Rise’s next moves only to meet defiance from some of his top people. Even at the end of the issue Risers like Shockwave, Sixshot and others have a problem with Megatron’s leadership. Seeing all these soon-to-be Decepticons question Megatron puts him on an intriguing path to become the ruthless and unquestionable Decepticon leader he’ll be known for in the near future.

Bumblebee’s action scene was the main development as his cover with the Ascenticons has effectively come to an end now that Megatron knows he’s not really one of them. His battle against the Action Masters was fairly tense as he was completely overwhelmed by the Ravage-like bot, getting huge pieces of metal bitten out of him and seemingly without help until Chromia’s timely arrival. Aside from that, Orion Pax got a lengthy discussion with Sentinel as he recommended some rational plans of action against everything going on only to be completely rebuffed by Sentinel. Orion hasn’t gotten a whole lot of attention throughout the series as of yet, but with how everything is going hopefully we’ll get to see more of Orion and his growing role in Cybertron’s leadership.

Transformers #19 is one of the few issues of the series thus far to have only one artist do the whole issue. Anna Malkova’s work is nicely detailed with her character movements and expressions, particularly during Bumblebee’s ambush. With how much goes in on the story, Malkova bounces between the different scenes with ease and keeps the art energetic. Joana Lafuente’s colours compliment Malkova’s art well as she uses a good combination of brights and darks with Bumblebee’s fight as they fight above and underground and outside. Their work makes this issue among the best in the series so far.

Ruckley definitely ups his game here in Transformers #19. He’s still playing the long game he started, but the pace of the series has really amped up and ‘Rise of the Decepticons Part 1’ takes thing to a whole new level as Megatron makes a lot of big moves in his bid to control Cybertron. Hopefully we’ll see more Orion Pax take more of a central role as Megatron spirals further and their friendship inevitably turns into their epic rivalry, but for now Ruckley has sparked a whole lot of intrigue into how things will play out.