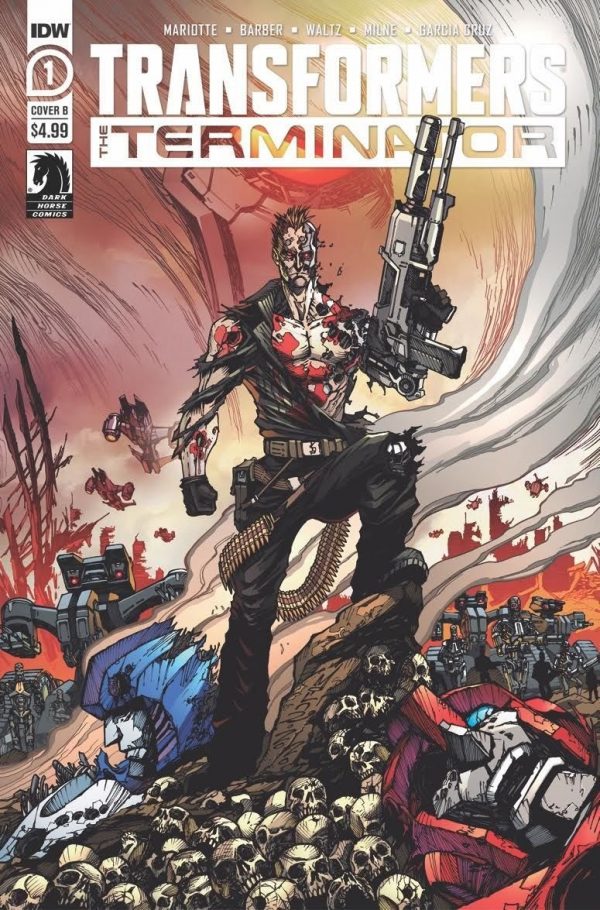 A new Transformers crossover has begun and this time the Transformers are facing down another set of popular sci-fi robotic villains in Transformers vs. Terminator #1. The idea of Autobots and Decepticons fighting T-800s and Skynet is rife with potential that writers John Barber and David Mariotte not only fulfill, but subvert with a clever story set-up. The first issue of the crossover is fun, fast-paced and an intriguing look at how both franchises merge together.

Like the classic first Terminator film, Transformers vs. Terminator opens up in 2029 Los Angeles as the Resistance is facing a losing battle against their machine oppressors. It’s not long though before a pretty cool twist is introduced, flipping the narrative and letting fans of both franchises know the crossover won’t play out as some might expect it. Barber and Mariotte give this world an interesting hook that keeps the story fresh for the remainder of the issue, even as it goes through the traditional steps of the start of a Terminator film as the lone resistance fighter is sent back, steals clothes, “come with me if you want to live”, etc. The only thing that feels out of place is a moment where Sarah Connor stands up to a rude customer, something that feels more in line with her character post-Terminator instead of pre-Terminator.

As the opening issue, it focuses more on the Terminator side of the crossover than it does Transformers, but still does some interesting things with the Cybertronians. The choice to go back to 1984 – not only the year The Terminator was first released, but also when Transformers premiered on television – is a nice touch that harkens back to the origins of both franchises. Instances like Sarah Connor working at a small diner, the Ark hidden under a volcano until it erupts and wakes its inhabitants help emphasize the beginnings of each story and melds them fairly well together in this alternate continuity.

Alex Milne is no stranger to illustrating transformers as he has worked on various Transformers comics for well over a decade. His imagining of 2029 with its desecrated landscapes, flying Hunter Killers and Terminators fits the tone of Terminator very well, though the Arnold Schwarzenegger-based T-800 doesn’t look quite as big and menacing as Arnold did, seeming instead to be just a bit bigger than Sarah at times rather than the hulking brute he is in the film. Aside from the T-800’s size, Milne’s work on the humans is solid with their body language and facial expressions, but of course his work on the Cybertronians is excellent in its detail and scale of the bots. David Garcia Cruz’s colours compliment Milne’s work very well too, creating a vibrant issue that captures the dreary world of 2029 and mixes the brights and darks of 1984 nicely.

Transformers vs Terminator #1 is a compelling introduction to this crossover with developments fans won’t expect. Barber and Mariotte convey the world of Terminator well in this new setting and make a fast-paced issue that never slows down, but doesn’t feel like it’s going too fast either. Milne’s art is nicely detailed with his transformers and humans while Cruz’s colours enhance Milne’s visuals. Fans of both franchises won’t be disappointed in the beginning of this entertaining story.