Alex Moreland interviews William Shaw about The Rings of Akhaten, the wider work of its writer Neil Cross, and more… 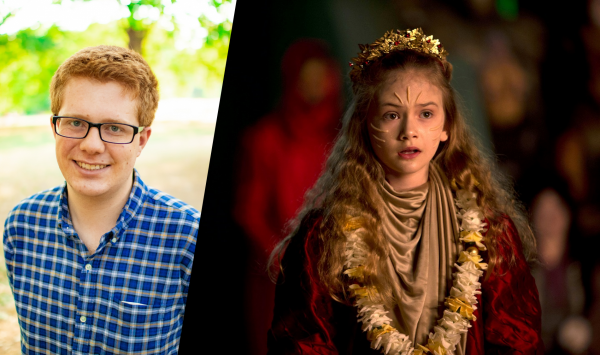 I recently sat down with William Shaw – a writer and blogger originally from Sheffield, now based in London, whose work has appeared in Star*Line, Space & Time, The Martian Wave, The Oxford Culture Review, and Doctor Who Magazine – to discuss his upcoming book about The Rings of Akhaten. It’s the latest in the Black Archive series published by Obverse Books; each book takes an in-depth look at a different episode of Doctor Who.

You can find the first part of our interview – in which we discussed the Steven Moffat era, the exclusive material from The Rings of Akhaten director Farren Blackburn that appears in William’s book, and more – here. What follows here are William’s thoughts on the surprising similarities Neil Cross’ work shares with Chris Chibnall, what Doctor Who could learn from The Rings of Akhaten going forward, and more…

That’s a good question, and I spend a whole section of the book untangling it. Because on the one hand, you think about Luther, which is this gritty crime drama full of serial killers and gore, and you contrast it to The Rings of Akhaten, which is this gentle fantasy story about a child learning to sing, and you’re like, what? But digging into it, there is a surprising amount of continuity. (Including one connection to the second series of Luther I was surprised no-one had made before). I think the big one is astronomy; all his shows draw on images of outer space to one degree or another. His characters are always talking about stars, galaxies, and black holes, and the smallness of humanity in the face of that. Hard Sun is all about that of course, but it’s all over Luther, and it’s even in some of his novels (I’m really looking forward to the TV version of Burial, by the way). The most interesting thing of his I watched was his M.R. James adaptation, Whistle and I’ll Come To You. It’s this really atmospheric ghost story which helped clarify some of what’s going on in Akhaten, and especially Hide. Plus, it stars John Hurt, the War Doctor himself.

Given Neil Cross’ experience as a showrunner, he occasionally came up in some fan circles as a potential replacement for Steven Moffat. What do you think the Neil Cross era of Doctor Who might’ve looked like?

It’s hard to say, especially as he only did two episodes of Doctor Who, but I think it might have looked similar to what Mark Gatiss, another writer bandied about for the job, would have done. Gatiss is often talked about as a nostalgist, and I think he and Cross both absolutely in touch with the history of what’s sometimes called British Telefantasy. Cross has talked in interviews about how much he loves things like The Stone Tape, Sapphire and Steel, and of course both he and Gatiss have made Ghost Stories for Christmas. I imagine Neil Cross’s Doctor Who would have some of the neo-Kneale edge there is in some of Gatiss’ work. It would probably be fairly long on scares, with perhaps a more acute sense of the wonders of space. But this is pure speculation, really. I think it’s a very welcome development, and probably my favourite thing about Chibnall’s Doctor Who, that we seem to be moving away from the rigid atheism of a lot of the show’s history. I think some of it is a continuation of trends from the Moffat era. Davies was at times very influenced by New Atheism, and there’s a real softening of that through Moffat and then Chibnall. The Thirteenth Doctor has clearly learned the lessons the Eleventh Doctor doesn’t quite get in The Rings of Akhaten; that religion is more complicated than just this evil parasite that poisons society. I feel very lucky to be releasing the book now, because there’s a really interesting conversation developing about these topics. I highly recommend my friend Max Curtis’s piece about this, and I’m looking forward to James F. McGrath’s Black Archive on The Battle of Ranskoor Av Kolos.

What do you think Chris Chibnall might be able to learn from The Rings of Akhaten ahead of Series 13, do you think? What does a properly post-Akhaten episode look like?

One of my favourite things about The Rings of Akhaten is that it starts off big, with this whole planet of weird aliens, and then goes small; most of the runtime is spent with just Clara, Merry, and the Doctor. I think some of that intimacy is often missing in the Chibnall era, which tends to have very large supporting casts in each episode. I think that sense of intimacy, while still telling stories with a cosmic scope, would be very welcome in the next Chibnall series. So, we know you like The Rings of Akhaten. What are some of your other favourite Doctor Who episodes? Anything from the recent run you’ve particularly enjoyed?

Oh, there are too many to mention, but some of my favourite Doctor Who stories are the more satirical ones; The Space Museum, The Macra Terror, Carnival of Monsters, The Happiness Patrol, Gridlock. I really like the way Doctor Who can depict these strange distortions of our own society, and be cutting and energetic while also being very, very silly.

Of the classic series, the Sylvester McCoy years are probably my favourite. There’s such a wonderful energy to them, such ambition, and a weirdly hypnotic rhythm to them that I just get swept up in. My favourite new series Doctor is Peter Capaldi, especially series 8 and 9. Kill the Moon, In The Forest of the Night, Last Christmas, The Girl Who Died/The Woman Who Lived, Heaven Sent/Hell Bent, and Thin Ice are among the best things Doctor Who has ever done.

More recently, I’ve really enjoyed Rosa and Demons of the Punjab; for all their faults, that sense of Doctor Who engaging with the history of colonialism and anti-racist struggle is really worthwhile, and I missed it in series 12, to be honest. It Takes You Away is an astonishing piece of Doctor Who, and my favourite of the Whittaker years so far. I also kinda like Orphan 55; it’s a mess, but so many of the components are just delightful, and there’s a great story in there somewhere. Someone should do a Black Archive about that one.

A little more broadly – is there anything you’ve read/seen and enjoyed lately?

I’m currently reading The Stone Sky, the third part of the Broken Earth Trilogy; N.K. Jemisin is a genius, and clearly one of the best SF writers alive. I’ve also enjoyed Charlie Jane Anders, Patricia Lockwood, Naomi Alderman, Sally Rooney, Sarah Pinsker, Marie Vibbert, Alexei Sayle, Vahni Capildeo, and Ahmed Saadawi. I’ve also really enjoyed the work appearing in Uncanny Magazine and Fiyah Litmag; those are both excellent outlets, which you should go and throw money at. I should also give a shout-out to my editor, Philip Purser-Hallard; his Sherlock Holmes book, The Vanishing Man, is some of the best mystery writing I’ve read in ages.

In Doctor Who land, I’ve really enjoyed the other Black Archives; Una McCormack’s book on The Curse of Fenric is especially good. Elizabeth Sandifer is a touchstone for my writing; I’ve really been enjoying Dalek Eruditorum, and I look forward to her Sylvester McCoy book.

My favourite film of recent years is Sorry To Bother You; it’s an astonishingly ambitious film, and you keep wondering how on earth they got away with it. I also really like Knives Out, Little Women, and I finally caught up with Snowpiercer, which is just extraordinary. In TV, I really enjoyed The Cry, Hannibal, The Long Song, Derry Girls, and the most recent Alan Partridge. Is there anything you’re working on at the minute you’d like to tell us a little bit about?

I’m actually working on another piece about New Atheism, which should hopefully be out later this year. The idea is to discuss what I’ve learned writing this book, for an audience that isn’t necessarily interested in Doctor Who, but is interested in how these ideas impact politics today. I’ve also got a few poems and things on the go, and will hopefully have a few new reviews for my blog before the end of the year. So, I’m keeping busy, and experimenting with writing about things other than Doctor Who. It’s going pretty well so far.

Finally, then: what would you most like someone to take away from reading the book?

I hope this book encourages people who weren’t fans of the episode to give it a second chance. Learning to appreciate The Rings of Akhaten has brought me no end of joy; I hope I can share that appreciation with others, and encourage them to take a leaf out of my book.

William Shaw, thank you very much!

William Shaw’s Black Archive on The Rings of Akhaten will be published April 6th, and is available for pre-order now. You can find William online here, or on Twitter @Will_S_7.