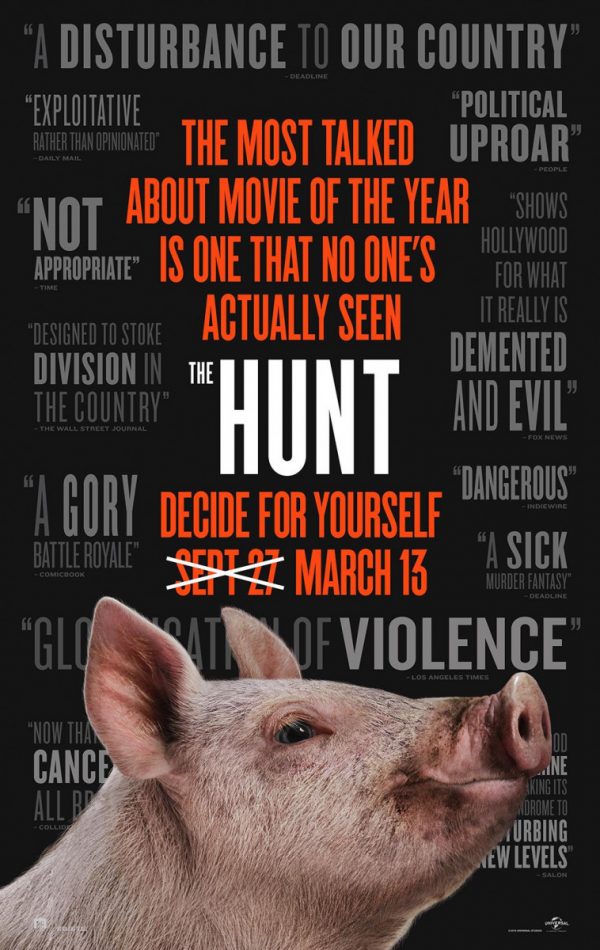 “Controversial” movies rarely turn out as interesting as the hand-wringing that surrounds them, and true to that maxim, Craig Zobel’s (Compliance) The Hunt isn’t nearly as incendiary as its last-minute postponed release late last year might suggest.

But it still presents a relatively amusing provocation to audiences, to stomach a Blumhouse-produced exploitation film released in the era of Donald Trump which dares to cast the liberal elite as the antagonists hunting down gun-loving southerners who, the film implies, quite probably voted for Trump.

Take away the political fringe, though, and the spine of this movie is incredibly simple; twelve seemingly “regular folk” are kidnapped and dropped in a field, after which they’re hunted by a fleet of well-armed individuals whose agenda isn’t fully clear – though certainly suggested. The most resourceful member of the hunted, Crystal (Betty Gilpin), ultimately leads an angry crusade to not only survive, but get to the bottom of their kidnapping. It goes without saying that The Hunt is a film which will upset many, especially those on the left side of the political spectrum, given that the script from Nick Cuse and Damon Lindelof intentionally clouds its own agenda – if it even really has one. Is it a “gotcha” aimed at smug, overly dogmatic liberals? A takedown of the powerful rich regardless of politics? Or perhaps an assertion that prejudicial absolutes make fools of us all?

Maybe it’s all of these things, and that ambiguity, that apparent failure to commit to a singular satirical through-line, will naturally give some even further pause to see the movie. At a time where the American left is desperately scrambling for unity in order to remove Donald Trump, an equal opportunities, all-seasons piss-take of “both sides” might seem unpalatable, yet as a bold spicing to an otherwise competent-yet-uninspired thriller, it certainly makes The Hunt an outing not so easy to forget.

There’s a moment mid-way through the movie when the action grinds to a halt and Crystal tells a long-winded rendition of The Tortoise and the Jackrabbit, before refusing to conclude which animal represents which side of the political spectrum. This cements how thoroughly the script relishes withholding all of its cards from the viewer, to ends audiences may see as either cowardly or cheekily courageous. There are nevertheless many times where the slant does seem rather on the side of conservatives, with much of the film’s runtime devoted to sending-up effete, liberal hypocrisy, perhaps because gross conservatives have been (rightly) dragged through the mud so thoroughly on-screen for their gun-loving racism that it’s, dare one say, a bit “boring” at this point.

The truth, of course, is that most people don’t fall into the film’s convenient buckets of obnoxious, wealthy neo-liberal or salt-of-the-Earth conservative, and that’s where the simplicity of the tale as both satire and allegory starts to show. Does it invalidate the film as a slightly canny slice of gory schlock? Not really, but it does make it feel decidedly de-fanged compared to its already-established rep as a transgressive FU to “PC culture.”

Yet if you can stop thinking about the movie’s goals for even a minute while watching, The Hunt begins as a relatively mediocre action-thriller that’s a whole lot goofier than the marketing suggests. The opening set-piece is an unwieldy collection of splatter-filled death scenes, which while entertaining, feel dangerously close to parody in their cartoonishness.

A full head of steam begins to build once Crystal becomes the focal character, though, girded by Gilpin’s charismatic, ass-kicking performance, and the sensible ambiguity of her character’s politics. Audiences might think they know which way she votes, but the script smartly doesn’t ever dish up the truth for sure.

But the best is surely saved for last, with a full-tilt third act which best serves the picture’s dual functions as grisly neo-Grindhouse-cum-timely comedy. This is also where Hilary Swank’s shadowy antagonist Athena figures most, resulting in some amusingly daft banter from an on-fire Swank, and a fight scene which finally sees Zobel, whose direction skews oddly pedestrian for most of the first hour, wake the hell up.

This movie was always going to rustle feathers; it’s been cannily marketed to appeal to the right on a superficial level, though any reading of the film even an inch below the surface reveals it’s hardly interested in casting all liberal ideologies to the fire. An intriguing litmus test for audiences, The Hunt amuses with its provocatively ambiguous political stance, even if the genre film underneath is relatively boilerplate thriller fare.