Some will never get the passion that sport can inspire in fans and indeed the athletes (whether professional of amateur). Whether you love a sport as a spectator, or an active participant, that love is something almost unique to sport. That passion drives us to euphoria sometimes and in others a state of depression that can last days (I’m an Aston Villa fan, believe me about that last part in particular).

As a result, the humble sports film has been a staple of cinema and offers a wide array of genres (And sports under the microscope). Whether you’re watching the triumph of spirit and guts over physical superiority in boxing films like Rocky, or being entertained in comedy musings about the usually restrained game of Golf, in Happy Gilmore, the sports film offers instantly recognisable set pieces with which to place our protagonist. Such classic staples include the aforementioned underdog, perhaps the older athlete having one last pop at the big time (The Rookie, Bull Durham), or someone upsetting the rules of the game and the decorum of it (Happy Gilmore, Caddyshack).

Once such proponent of sports cinema is writer/director Ron Shelton, a former minor league Baseball player who turned his hand to screenwriting and directing. Shelton’s main speciality has been in Sports drama/comedy. I could double bill any number of them, from Play it to the Bone, Tin Cup, The Great White Hype, Cobb to Blue Chips or The Best of Times.

However, lets take a look at two of his most iconic (and best). In many ways this will rank as Shelton’s crowning glory. A baseball themed drama sees a retired minor league catcher (Kevin Costner), drafted in to help hone the skills of a talented but bone-headed pitcher (Tim Robbins). Both men catch the eye of local baseball fan and seasonal fancy woman (for whichever player she happens to hook up with for a season) played by Susan Sarandon.

The beauty of Durham lies in its engaging characters, it’s wry script and it’s careful use of baseball itself. This doesn’t allow baseball sequences to become all consuming (particularly, if like myself, my engagement with the sport is almost non-existent). That being said, given his own background in the sport, those sequences are enjoyably crafted and do just enough to rouse excitement, before getting back to the small matter of the three way love triangle. Shelton received an Oscar nomination for his script. He’s well aided by excellent performances from Costner (who hasn’t always been able to pull off charming and funny, but does here) and Tim Robbins. However it’s Susan Sarandon as a scatterbrained, impulsive hippy, with an impressively studied knowledge of the game who steals the show. Smart, funny, individual and sexy.

A year later Costner would do the enjoyable, if maudlin baseball fantasy about father/son dynamics and loss, Field Of Dreams. That’s possibly slightly more iconic in his career, though as far as Costner sports films, Bull Durham remains the best. Costner and Shelton later re-teamed for Tin Cup (Golf this time) but trod over too much of the same terrain as this film, with less skill. 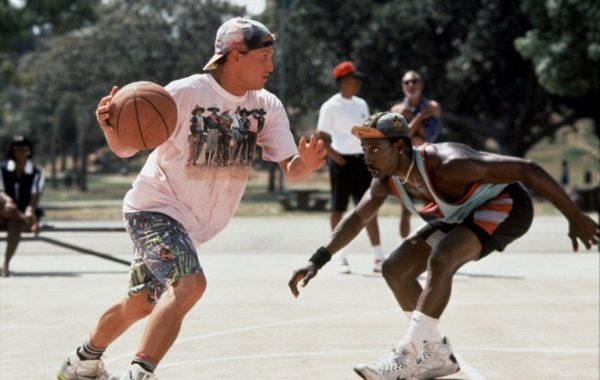 Famous double acts. The Two Ronnies, Laurel and Hardy, Pryor and Wilder, Woody and Wesley? Okay, their cinematic kinship lasted two films (plus one cameo turn) but such was the excellent chemistry displayed in White Men Can’t Jump and Money Train (great chemistry, average film), that it leaves you to bemoan the fact they didn’t make this a more regular thing.

This comedy drama about a pair of basketball street hustlers who reluctantly join forces to ruse street players out of cash, and then perform in an amateur 2 on 2 tournament, was something of an early 90’s revelation. A big cult film, very popular, with loads of quotable lines, it was a brilliant display of white/black interaction and dynamics. There’s a great cast all round, and with Rosie Perez particularly fantastic, but this film is running on Wesley and Woody power. Both are superb and the chemistry of the two, both at the top of their game, completely drives the film. Shelton shows a real gift for balancing the comedy, with moments of drama beautifully. A lot of the dialogue ‘asides’ feel almost Tarantino-esque, even if Quentin wasn’t quite pop culture then. Shelton almost feels as if he’s ahead of the mimic curve there, but it would be more pertinent to say that he’s got his own style here, aided by the respective riffing and personalities of his two leads. Additionally, the basketball sequences are fast, dynamic and fantastically shot. The sheer simplicity and visceral pace of 2-v-2 works brilliantly on film. There’s no complexity, not much tactical precision, it’s direct, attacking all the way, finding plenty of enjoyment out of the conflict between Wesley’s showboating style, over Woody’s practicality.

There’s a lot to love about White Men Can’t Jump in the sizzling comedy and brilliant set pieces, but more so the growing bond between the two, particularly during their own respective struggles (Wesley trying to get his family out of a crime ridden neighbourhood, and Woody the compulsive gambler).

What’s your favourite Ron Shelton sports film? Let us know in the comments below or on our Twitter page @flickeringmyth…