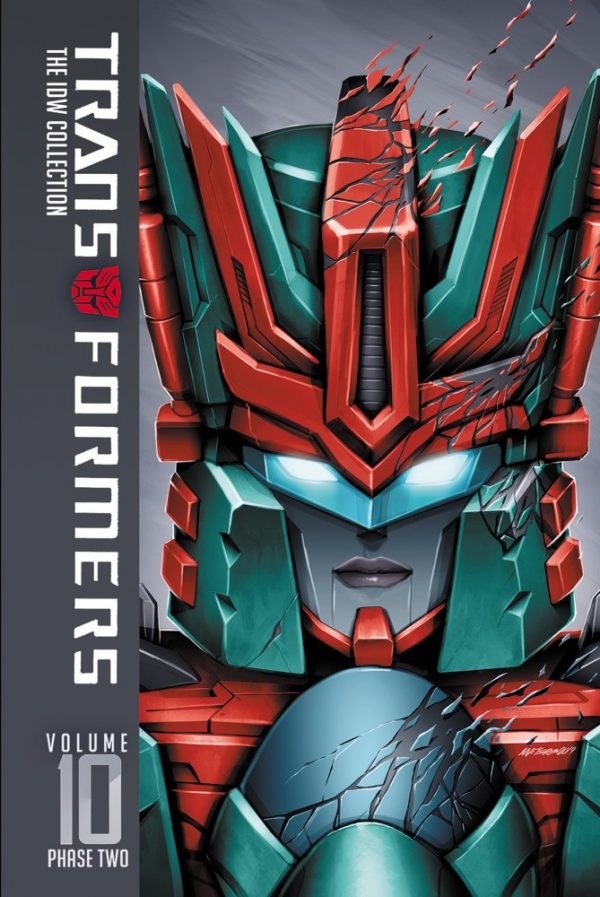 IDW’s latest collection of their previous Transformers continuity features some good stories, but ones that aren’t quite as connected to each other as most of the previous collections have been. Rather Transformers: The IDW Collection Phase Two – Vol. 10 feels fairly episodic, though the stories still tie into the larger arcs writers John Barber, James Roberts and Mairghread Scott have been crafting in their individual series of Transformers, More Than Meets The Eye and Windblade respectively while Nick Roche returns to the world of the Wreckers in a sequel to Last Stand of the Wreckers.

Following the events of Combiner Wars from the previous volume, there’s no real central character any of the stories follow like Optimus in Transformers or Rodimus in More Than Meets The Eye. In fact, the main Transformers series only gets two issues here as the focus is placed on the other series. That said though, the first half of the collection largely follows Windblade and Arcee as the former makes contact with other lost Cybertronian colonies – one of which is full of Beast Wars characters – and the latter sneaks around on her own trying to prevent Cybertron from falling into even more chaos than it already is in. It leads the two characters into a brief confrontation in the Combiner Hunters special, in which yet another combiner is created from Pyra Magna and her team of Torchbearers. Those stories feature some nice character work from Scott and Barber with Windblade and Arcee and their views of post-war Cybertron. They also continue to examine the state of Cybertron’s government and the rising tension among its citizens, particularly the former Decepticons. Scott plays with the fragile peace and politics in Windblade quite well as the title heroine tries bringing more colonies back to Cybertron while keeping Starscream’s power and ambition in check.

The highlight of the book is Sins of the Wreckers, Roche’s sequel to what is considered to be one of the greatest Transformers stories ever in Last Stand of the Wreckers, that follows an elite Autobot squad assigned for their most dirty and often morally ambiguous missions. The sequel sees Prowl, who has gone AWOL after his actions in the previous collection’s Combiner Wars, is kidnapped and blackmailed by someone from his past and needs the Wreckers’ help before Autobot secrets make their way out into the world. While it doesn’t quite live up to Last Stand, Sins is still a nice follow up that focuses on some classic G1 characters like Prowl, Springer and Kup along with one of IDW’s original human characters Verity and some lesser-known bots from the franchise. Roche also continues the themes of grey and greyer morality as further secrets about all the characters are revealed but he does his best work with Prowl, who became one of the most manipulative and often cold figures in this continuity. Roche also provides the artwork in the series and is nicely detailed with his characters, especially some that are a little out there with their alternate modes, and the graphic action.

Robert’s More Than Meets The Eye tales feature his brand of well written humour and character development as he brings some of the story back to the start of this ‘second season’ on the title since Megatron joined the crew. The focus on these issues isn’t on Rodimus or Megatron as has often been the case in previous ones, but on the lesser-known Decepticon group the Scavengers and bots like Cylonus, Tailgate and Rung, the latter three of which became quite prominent in Roberts’ run. They are fun issues that feed a bit more into Roberts’ long-game story while also building on the development with those three characters, particularly Rung as he has to deal with someone from his own past coming back into his life. Also included in the book is the Holiday Special with two Christmas-themed stories that are fun little side stories, but have no bearing on any of the series’ at large.

The artwork includes the talents of Corin Howell, Andrew Griffith, Sara Pitre-Durocher, Alex Milne, Brendan Cahill, Josh Burcham and Hayato Sakamoto with colours by Burcham, Joana Lafuente, Yamaishi and Josh Perez in addition to Roche’s work on Sins. All of their artwork is well done with fluid and detailed characters and rich environments. The variety of characters and locations throughout the book really shows off the abilities of each artist, particularly when panels can often feature several characters in it, yet none of it feels confusing or overdone. It all flows pretty well as it bounces from different series as the book goes through IDW’s continuity in its typical chronological order.

Transformers: The IDW Collection Phase Two – Vol. 10 may not have as overarching a narrative as some of the previous collections, but the stories presented here still contain nice examinations of its characters and themes with great artwork from its large team to boot. Fans of IDW’s Transformers series should be happy with this collection while those who haven’t followed it quite as well will still find a lot to enjoy here.