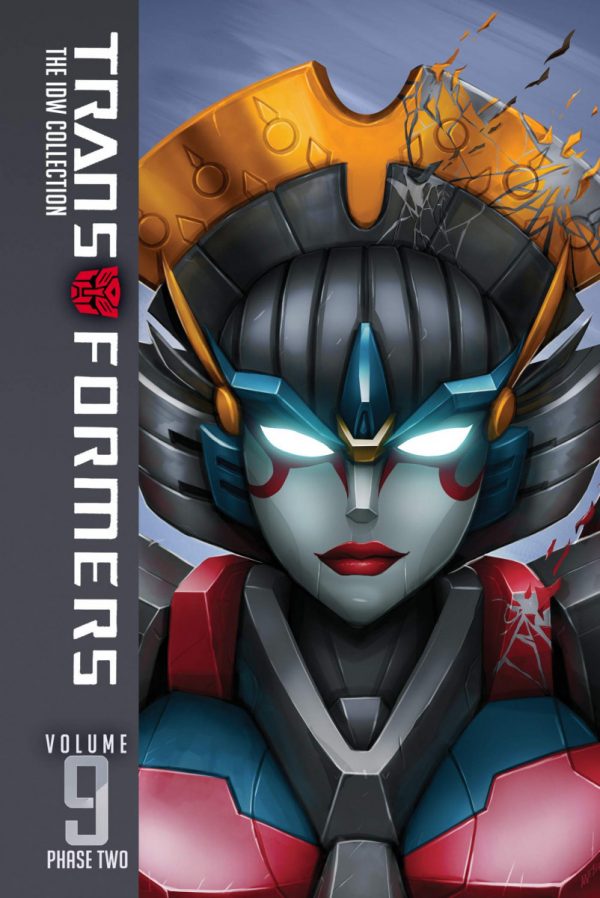 IDW’s deluxe collections of their previous Transformers continuity have now reached a ninth volume, combining stories from Transformers, More Than Meets The Eye and Windblade into one book. The titles mostly have a different tone and feel to each other, particularly More Than Meets The Eye‘s crazy and meta-filled narrative, but each is enjoyable and feeds into another in either slight or big ways, making everything feel fairly cohesive. The writing from John Barber, James Roberts and Mairghread Scott focuses on the characters to a great degree while also providing some interesting plots and story developments. The visuals from the various artists also make the book a treat for readers with plenty of great imagery on the many Autobots, Decepticons or other bots. For anyone who has enjoyed IDW’s efforts in collecting their stories in a mostly continuity correct method, the new volume is an entertaining read.

Beginning with IDW’s crossover event Combiner Wars, the story follows Optimus Prime as he returns to Cybertron and helps Windblade welcome her colony of Caminus to the planet only for Starscream to try creating and controlling new combiners in an effort to gain more power. It also sees tensions between Optimus and his longtime trusted friend and advisor Prowl rise as the latter bot takes increasingly dark and drastic measures to stop Starscream. It’s a fairly good story with an intricate plot as Optimus, Windblade, Prowl and Starscream navigate around each other, but it also feels the influence of corporate meddling as Habro was putting out a relatively unrelated Combiner Wars toyline for the Transformers franchise and wanted the comic to act as a tie-in. While John Barber and Mairghread Scott did build up to the event, specifically in Barber’s Transformers issues in the previous collected volume, it still puts a bit of a screeching halt to the events on Earth with Galvatron, a fact that is made more apparent by the event’s epilogue and the book’s final issue.

Even with the corporate influence, Combiner Wars is a fairly entertaining story and more complex than one might assume for a story featuring multiple combiners and plenty of brawls between them. There’s just as much political intrigue as there is action as Starscream plots away and moves people around like chess pieces while Cybertron makes contact with a lost colony for the first time in millions of years. An added wrench to both Starscream and Optimus’ plans is the fact Windblade’s people believed a Prime – any Prime – is essentially a prophet carries the word of their god. Optimus’ reaction to this news is interesting as is his willingness to play into their beliefs to complicate Starscream’s plans. Meanwhile, everyone has to contend with Prowl’s increasingly drastic ‘by whatever means necessary’ methods to save the universe his way. Both Barber and Scott handle the characterizations of the cast, whether old or new, nicely as they come to grips with their new reality. Optimus and Prowl’s tense relationship also gets a nice focus as things finally come to a head with Barber providing an emotionally complicated confrontation between them.

The fallout from Combiner Wars is touched on in the rest of the Windblade issues as she and other Autobots meet with more Cybertronian colonies while again working to undermine Starscream’s ambitions as much as they can. Scott makes Windblade an interesting character with how she balances her naivety, beliefs and rational mind. She also plays around with the vast differences between Cybertronian cultures and how they operate day-to-day life or decide their politics. After so many stories in this continuity of Autobot vs Decepticon, it’s refreshing to see some further variety added to the factions as more are introduced. Scott reimagines some Generation 1 and Prime characters while creating new ones and blends them in the continuity pretty well. She really opens up the wider world of Transformers in an intriguing way.

The one series that was left relatively untouched from Combiner Wars was More Than Meets The Eye as James Roberts continues his longform story as Hot Rod and Megatron search for the fabled Cyberutopia. Roberts writes a couple seemingly self-contained stories that work within the larger mythology and arc he crafted that go completely bonkers with their concept. From little tiny bots that feed off someone’s charisma to a very meta story in Swerve’s mind that pokes fun at many of the tropes in the series, Roberts writes some compelling tales rich with intriguing character work, plot developments and clever humour. His work on Megatron continues to be excellent as he reinvents the typically evil character as someone weighed down by the damage he’s caused looking for redemption. The MTMTE issues here may not connect to the other stories presented, but they are still compelling on their own.

The art throughout the book features a great collection of talent. Livio Ramondelli, Sarah Stone, Andrew Griffith, Josh Perez, Alex Milne, Joana Lafuente and Corin Howell are just among several of the illustrators and colourists in the book. Ramondelli gets perhaps the most to do as he is the primary artist on Combiner Wars and creates a lot of great imagery of the various combiners and uses a nice mix of colours to his work. Howell’s work on Windblade is a bit more animated than the others, but he makes the characters stand out with their expressions and transformations while featuring an entertaining and high stakes race. Milne, meanwhile, is incredibly detailed in MTMTE. There is a lot to pour over in his issues and Joana Lafuente’s colours give his work a vibrant look, especially in the series’ last chapter of the book.

Transformers: The IDW Collection Phase Two – Volume 9 has some great talent with Barber, Scott and Roberts’ writing and their collection of artists. Though Combiner Wars takes up the heft of the book and has its feel of corporate influence, Barber and Scott still manage to make it an entertaining story entwined in their expansive mythology with nice character work from Optimus Prime and Prowl to boot. Between that and Roberts’ More Than Meets The Eye, there is plenty for Transformers fans to enjoy in this collection.