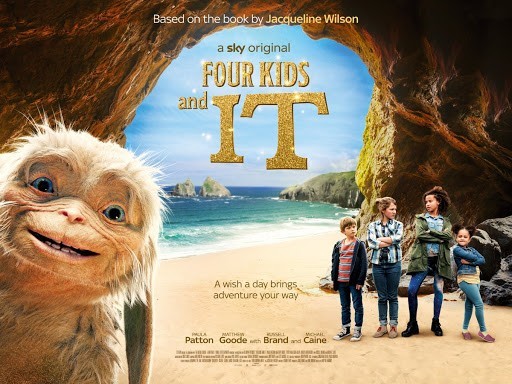 A group of kids holidaying by the sea discover a mischievous, ancient creature with the power to grant wishes. 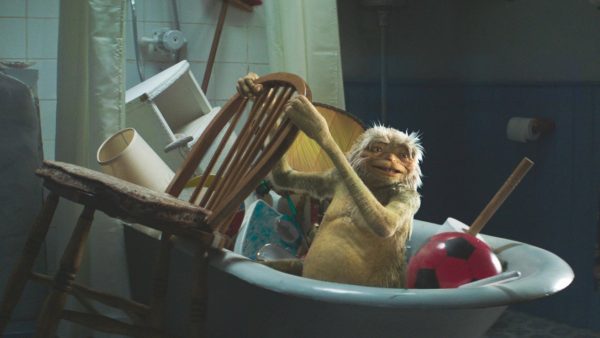 Jacqueline Wilson’s novels have never been adapted for cinema. Despite the 74-year-old literary legend’s status as one of Britain’s most beloved children’s authors, her work has only ever been transposed from page to the small screen. Readers of a certain generation will no doubt remember the long-running series The Story of Tracy Beaker and several Wilson classics have been adapted as feature-length TV movies, but the gloss of a bona fide film has eluded the author. That is, until now. Receiving an on-demand release via Sky Cinema in the midst of the current health emergency – but hoping for an eventual cinematic bow – Four Kids and It finally ends Wilson’s long wait for a movie. Admittedly though, it’s something of a minor work.

The film sees two families each heading to the same coastal beauty spot, with four children unaware their lives are about to converge. Single mum Alice (Paula Patton) and single dad David (Matthew Goode) are dating and they’ve decided to reveal that to their kids in the midst of a seaside holiday. The children initially resent each other, but bond when they discover the ancient, Yoda-like Psammead – voiced with enjoyable snark by Michael Caine – on a secret, isolated beach. He has the power to grant one wish a day, lasting until the sun sets, but warns of consequences if the wish is not clear. 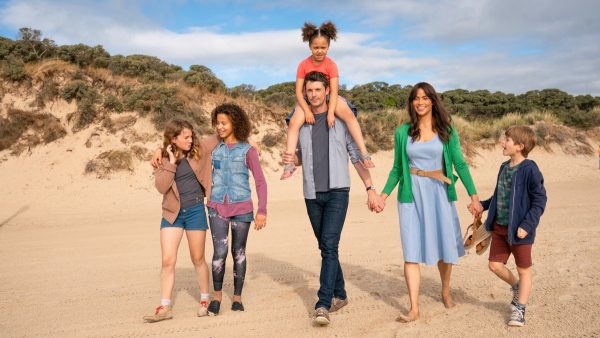 What follows is a fairly well-worn story in which the children learn the risks of getting everything they want via magical shortcuts, whether it’s a truncated pop concert that leaves them stranded hundreds of miles from home or a climbing-based wish that leaves one of them dangling perilously from a cliff. The material is old hat – Wilson’s book was itself inspired by the 1902 novel Five Children and It – and, disappointingly, this movie has very little to say that hasn’t already been said many times before.

The young actors, though, are spirited and bring energy to the storytelling, despite their rather stock caricatures. Teddie-Rose Malleson-Allen and Ashley Aufderheide are the standouts as warring step-siblings Ros, who love books, and Smash, who loves… smashing stuff. They’re certainly more convincing than their parents, who are played ably by Patton and Goode, but somewhat hamstrung by old-fashioned gender sterotyping – “Moms are supposed to cook,” says Patton – and the fact they seem to exist in a state of permanent, Carry On-inflected horniness that sits awkwardly in a children’s movie.

Equally strange is the presence of Russell Brand, portraying the villain of the piece. His flowery-voiced Tristan is an aristocratic local in an opulent mansion decorated with the spoils of his family’s colonial pillaging – he claims his family “liberated the primitive artefacts” of other civilisations. The role is essentially a vehicle for Brand’s obnoxious verbosity and, although he brings his unique charisma to the part – few children’s films feature a phrase as delectably silly as “ethnically insensitive erotica” – it’s never anything other than a one-note exercise in evil as he pursues the Psammead, inevitably being out-smarted by the kids in the process. 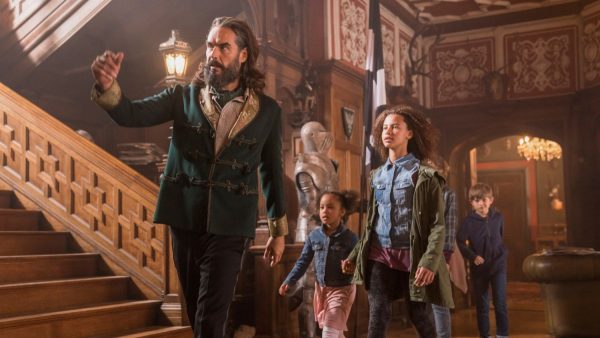 Four Kids and It is a hefty, ungainly adventure, running to almost two hours. This, however, doesn’t help the movie in communicating its themes and ideas, with almost every interesting avenue left unexplored in favour of larky sub-plots and prepubescent shouting matches. Simon Lewis’s script has a stark over-abundance of plot, which obscures much of the character-based intrigue and leads to baffling set pieces that seem taken from a different film. In one case, an apparently friendly detour segues into something from the dark superhero landscape of movies like Chronicle and Brightburn.

The movie sits uncomfortably in a world that quite clearly didn’t give it the budget for a cinematic fantasy odyssey, despite its pretensions towards the big screen. Though the realisation of the Psammead is as assisted by strong CGI as it is by Caine’s distinctive Cockney accent, much of the rest of the movie ends up looking starkly televisual in a way that rather undermines much of the magic at play. Four Kids and It shoots for the stars and, in some areas, manages to sparkle, but it often feels like a cinematic wish that could’ve done with a more powerful Genie granting it.