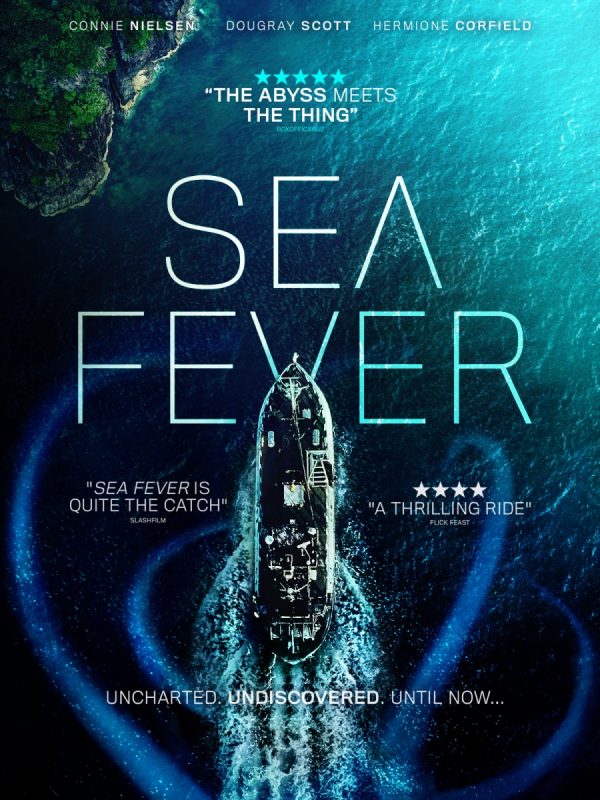 The crew of a marooned trawler in the West Coast of Ireland face a battle for their lives against a parasite growing in their water supply. 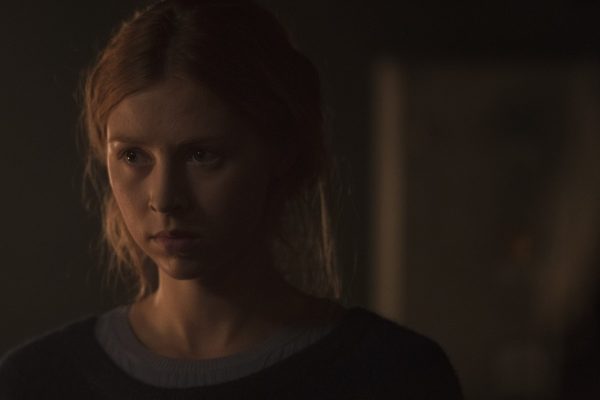 The open sea is a magnificent setting for many a tale of heroism, adventure and of angry maniacs hunting bloody big whales. When applied to a horror scenario, the sea is simply the perfect setting. You’re stuck on a confined space with no means of escape, surrounded by seemingly endless water with any chance of rescue probably days away. This brings us to the subject of today’s review, Sea Fever, an intensely claustrophobic sea-based horror that’ll have you thinking twice about setting sail.

The film is headed by a terrific lead performance from Hermione Corfield as the film’s heroine Siobhan, an introverted graduate student specialising in the study of sea life. Corfield begins as not the most likeable character, unwittingly insulting others such as the trawlers rather handy engineer by wondering that a man of his talents doesn’t “get a better job” than working on a fishing boat. However, once the plot really kicks into gear, Corfield emerges as the film’s best character, the actress brilliantly conveying the character’s intelligence and expertise in a manner that feels convincing and authoritative. 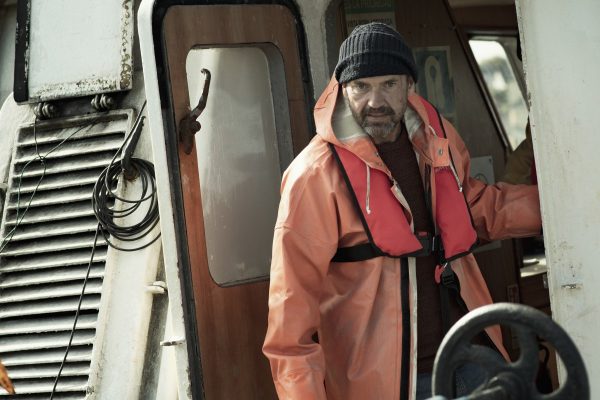 The supporting cast who make up the trawler’s crew are uniformly excellent, coming across as a warm, welcoming and pleasant bunch to spend months at sea with, even if the runtime doesn’t quite afford the actors the chance to fully develop them as characters. The only notable weak spot among the supporting cast is Dougray Scott as the trawler’s captain, with his otherwise dependable performance undermined by his inconsistent Irish accent, managing to just about pull it off at time working, while in other instances times it almost sounds Jamaican.

The film is a slow burner and a good one at that, the leisurely pace allowing for a gradual build-up tension and atmosphere as our protagonists quickly find themselves confronted with a threat none of them has ever encountered.

The atmosphere is superb, with the cramped claustrophobic setting of the ship, coupled with the vast openness of the sea serving to create an environment of increasing paranoia as the crew keep secrets from each other and wrestle with the moral dilemmas of their actions. Throw in a parasite that infects its host and causes all manner of gooey bloody mayhem, and you’ve got yourself a nice little sea-based remix of John Carpenter’s The Thing with a dashing of Jaws and Alien. The film’s horror elements are dished out in generous portions, with the film refreshingly devoid of jump scares, with only a handful of startling moments such as when our heroes come across another eerily quiet boat. You are left with this general queasy feeling in your stomach one that grows ever heavier as we edge towards a likely gruesome gooey sight. 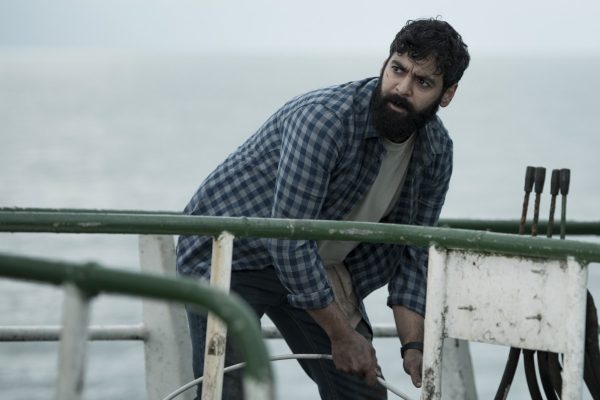 If the film has any real flaws it comes in the final third, with the film getting itself in a terrible rush to wrap things up, bumping off characters in quick succession where once it took its time. One character even decides to just up and leave the boat, taking their chance on the open sea rather than risk becoming infected by the parasite. The parasite itself, while a terrifying foe, is, possibly due to budget constraints, slightly underutilised and not afforded the chance to inflict too much damage on the crew aside from a one particularly gruesome death scene. It’s a terrific concept, albeit one whose potential is, sadly, not fully realised.

The ending is frustratingly anti-climactic as our heroes attempt once more to vanquish the parasite, with it being in a mad rush to wrap things up for a finale that, while visually beautiful and scored by a surprisingly soothing musical score, falls flat and feels utterly devoid of the suspense and intensity that had dominated the film up until then. It’s a disappointing ending that threatens to, but thankfully fails, to derail what is otherwise an immensely enjoyable film.

Sea Fever, despite its flaws, is a solid bit of seafaring horror aided by strong performances (especially Corfield’s resourceful heroine) and a queasy atmosphere that’ll have you feeling seasick in no time. Maybe with a slightly bigger budget and a longer runtime, this otherwise good film could have been a brilliant one. Check this one out if you’re curious.

Sea Fever is released on Blu-ray and Digital HD on April 24th from Signature Entertainment.