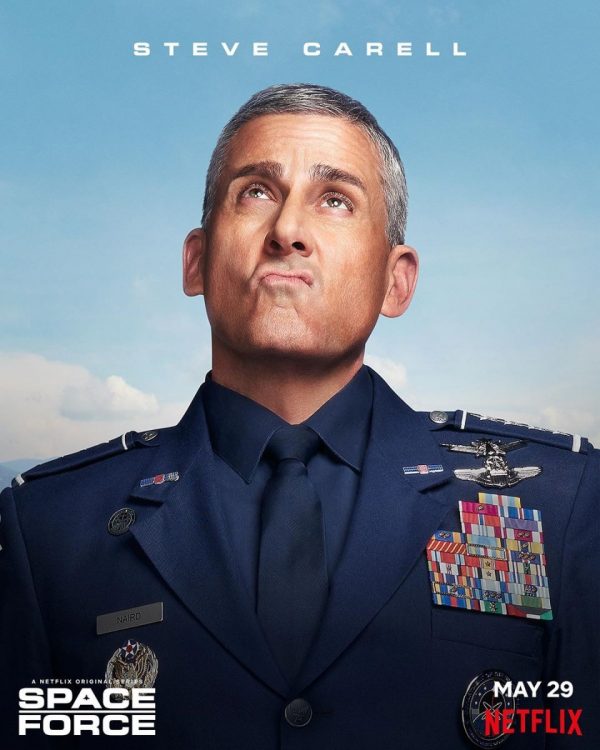 Netflix’s new sci-fi comedy series Space Force sees Greg Daniels, the creator of the U.S. version of The Office, re-team with that series’ star Steve Carell for a topical space-themed satire that, for all the talents of its cast, ultimately skews broad to a disappointing fault.

A workplace sitcom not entirely unlike The Office, Space Force follows four-star general Mark R. Naird (Carell), who despite his aspirations of running the U.S. Air Force, is tapped by the President himself to lead the latest branch of the Armed Forces, Space Force, as they mount a mission to get America back on the Moon.

There’s no prizes for figuring out that Space Force is a show very much centered on our present moment – no, not Coronavirus, but the Trump administration, loosely represented here by the systemic parade of goofballs which operate in and around Space Force.

Sadly it has to be said that the satirical bones are already bare if not fully picked-clean given the ubiquity of Trump-ribbing in pop-culture at present. It can’t be easy to find an angle to mock the POTUS that’s both fresh and funny anymore, as all ten episodes of this show persuasively prove. In what must pass for restraint, Daniels at least doesn’t dish up a literal Presidential stand-in; in fact, we don’t see the “Leader of the Free World” at all throughout the series. There’s little denying the sharpness of Space Force’s visual package – particularly its snazzy production design and glossy visual effects – yet one suspects it’s at the expense of the more limber, free-form approach possible in a more technically porous offering like The Office.

In fact, it’s easy to see how the mock-doc approach might’ve lent itself well to this premise; in the very least, it wouldn’t feel quite so anemic and vacuum-sealed. Hell, even a mid-series attempt to capture the manic, anything-goes energy of Community’s iconic paintball episodes – switched out here for a desert-set BB gun battle – comes across as oddly laboured and charmless.

Right from its very first episode, this is low on anything beyond the occasional modest chuckle, and it’s several more episodes before the series settles into a groove of consistent watchability. 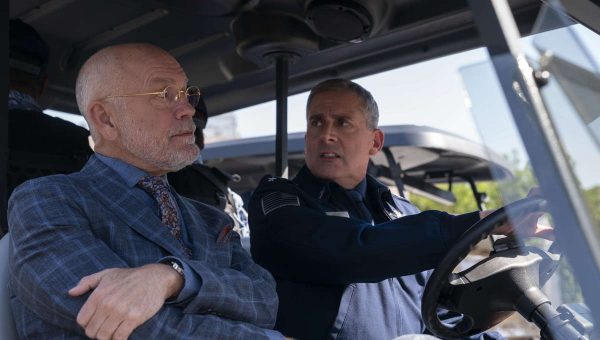 Compounding the aforementioned issues is not only a sluggish and scattershot central narrative which stretches itself gossamer-thin, but a comic sensibility straining all too hard to be modern-with-an-M. Beyond the Trump allusions, there are groan-worthy nods to Twitter, TikTok, Brexit, the Marvel Cinematic Universe and yes, Jeffrey Epstein; you can practically sense Netflix’s algorithm performing a trace on Twitter’s pulse.

Unsurprisingly, Space Force isn’t merely a compendium of daft sci-fi shenanigans, as a semi-earnest attempt is also made to deliver a gratifying dramatic arc for Naird and his family. Yet despite solid performances from Diana Silvers and Lisa Kudrow as Naird’s daughter and wife respectively, these storylines rarely shade outside the lines of generic, over-sentimental sitcom-y fare.

Away from the manacles of network TV, Daniels is at least allowed to infuse his show with both profanity and more risque thematics, though it honestly does virtually nothing to elevate the show’s comedy, boiling down to occasional invocations of the F-word for the most part.

What keeps Space Force afloat even when it’s comically benign, then, is ostensibly its cast. This is hardly Carell’s finest hour, but he does the best he can with the middling material, and sensibly skirts clear of making Naird anything close to a pure caricature of a real-life figure – be it Trump or otherwise. 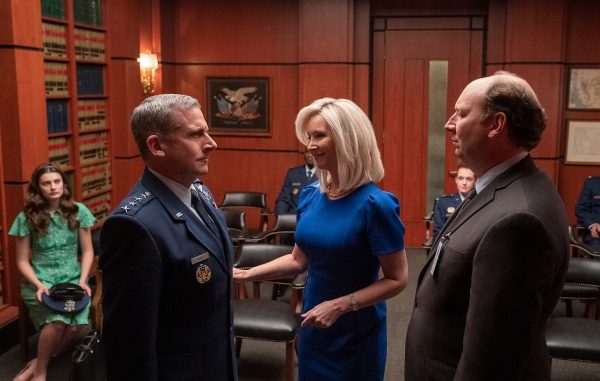 The series is categorically stolen away, however, by John Malkovich, whose Dr. Adrian Mallory serves as the show’s dignified ballast at almost all times. His deadpan calm makes for a sharp contrast with Carell’s bigger approach, and without spoiling anything, Malkovich is amusingly afforded the opportunity to show off a trick you probably never even knew he had up his sleeve.

Though the bulk of the show is a two-hander between Carell and Malkovich, the supporting cast is colossal and yet, despite Daniels’ involvement, oddly underused. Ben Schwartz plays Space Force’s smart-ass social media director F. Tony Scarapiducci and isn’t a million miles away from his Parks and Recreation character Jean-Ralphio – hardly a bad thing – while Jimmy O. Yang brings some sporadic laughs as a scientist working on the mission to the moon.

Yet despite her clear charisma, Tawny Newsome’s role as helicopter pilot Angela Ali feels curiously underwritten, and Ginger Gonzaga, who is divertingly spot-on as Congresswoman Anabela Ysidro-Campos – an obvious yet amusing parody of Alexandria Ocasio-Cortez – probably deserved a bigger role too.

More disappointingly, Jane Lynch, Noah Emmerich, Diedrich Bader, and Patrick Warburton are relegated to glorified cameos as the heads of various branches of the U.S. Armed Forces. In slightly more diverting cameo stakes, Fred Willard, who passed away less than two weeks ago, shows up for a few brief stints as Naird’s elderly father, and even with his clear frailty, reminds everyone why his loss was such a crushing blow. 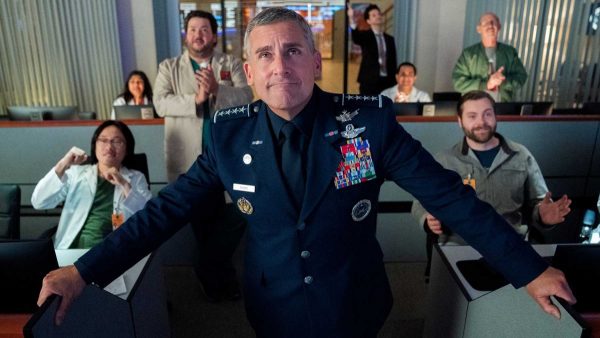 As much as Space Force may fall short of the enormously talented team it assembles – not least directors such as Paddington‘s Paul King and Mudbound‘s Dee Rees – it’s certainly not terrible by any means, and never disappears below being at least passable. The episodes are sensibly bite-sized and mostly move along quickly enough – bar the occasional elongated gag – even if the season’s head-scratcher of a conclusion likely confirms it’s better thought of as a one-off experiment than a promising new perennial for the streamer.

While it’s absolutely fair to say that many sitcoms don’t find their firm footing until season two – namely Parks and Recreation and Carell’s own flagship series – the foundation feels soggy enough in this instance not to pose enough promise for a second go-around.

Carried to decency largely by John Malkovich’s game performance, Space Force is nevertheless a disappointingly mediocre showing for its ultra-talented cast and crew.