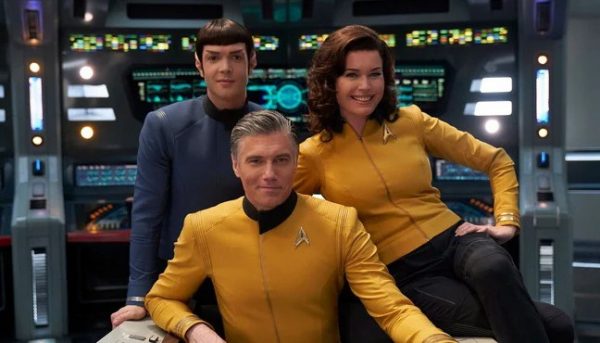 CBS All Access has announced that its Star Trek universe is set to expand further with the new series Star Trek: Strange New Worlds, which will take place during the early days of the U.S.S. Enterprise NCC-1701 and see Anson Mount (Captain Christopher Pike), Ethan Peck (Spock) and Rebecca Romijn (Number One) reprising their roles from Star Trek: Discovery.

“When we said we heard the fans’ outpouring of love for Pike, Number One and Spock when they boarded Star Trek: Discovery last season, we meant it,” said CBS’ Star Trek superemo Alex Kurtzman. “These iconic characters have a deep history in Star Trek canon, yet so much of their stories has yet to be told. With Akiva and Henry at the helm, the Enterprise, its crew and its fans are in for an extraordinary journey to new frontiers in the Star Trek universe.”

The characters of Pike, Spock and Number One first appeared in ‘The Cage’ the original pilot for Star Trek, where they were played by Jeffrey Hunter, Leonard Nimoy and Majel Barrett respectively. The pilot was ultimately retooled, with Pike being replaced by William Shatner’s Captain Kirk and Nimoy’s Spock taking up the Number One position. Pike would later make his return in J.J. Abrams’ rebooted movie franchise, portrayed by Bruce Greenwood.

Star Trek: Strange New Worlds becomes the third Star Trek series at CBS All Access after Discovery and Star Trek: Picard, both of which are returning for new seasons. The streamer is also working on a Section-31 spinoff revolving around Michelle Yeoh’s Philippa Georgiou, and has the animated comedy series Star Trek: Lower Decks incoming.

Are you looking forward to Star Trek: Strange New Worlds? Let us know your thoughts in the comments or on our social channels @FlicekringMyth…