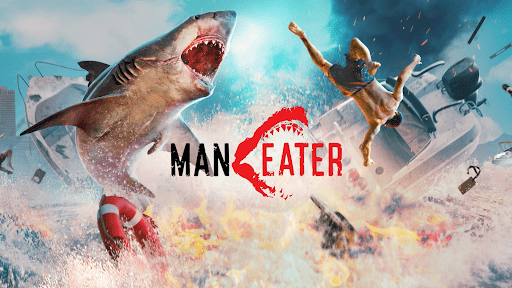 In our trying present, nobody could be blamed for giving card-carryingly “real” games like The Last of Us Part II a bit of a wide berth, their doom and gloom proving just a tad too relatable in the current moment. Some may instead defer to undemanding, colourful indie puzzle-platformers, while others might be tempted by the world’s first open-world “shark RPG” – Maneater.

Though some will understandably find its nearly non-existent difficulty and repetition disappointing, this is very clearly a game that never professes to be anything more than exactly what it is; breezy, daft fun that won’t stick with you for long, but is an enticingly chilled-out package while you’re playing it.

Maneater casts players in the role of a shark seeking revenge on Scaly Pete, a reality TV-starring shark hunter who previously killed their mother. In case that single sentence didn’t make it clear, the game’s tone is aggressively silly throughout, underlined by hilarious narration from Chris Parnell (Rick and Morty), who frequently chimes in to drop eccentric anecdotes, memorably offering up fish-based food recipes and considering how “profligate” sharks are at paying fines.

The central gameplay loop is divided between three modes; underwater exploration, where you can feast on marine life, find collectibles, and unlock grottos which allow you to upgrade; “knifing” on the surface, using your fin to survey the horizon and move faster through the water; and land-based, which requires hopping around to feast on residents, combined with light platforming to scoop up collectibles.

Despite being a game which encourages players to rip humans and animals alike apart, this is a bizarrely relaxing exercise, largely because even at low levels the player is made to feel so capable throughout. Combat doesn’t amount to much more than spamming the attack button, and even unskilled players will rarely end up with a Game Over screen. 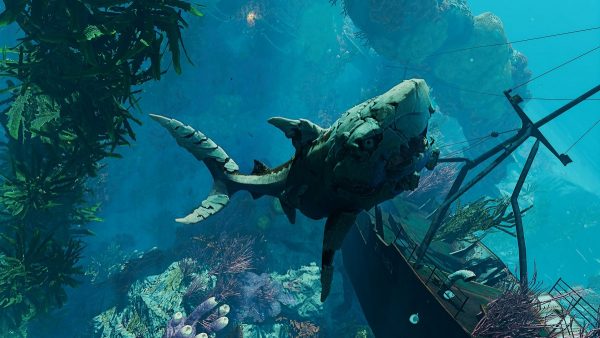 Levelling up is meanwhile appealingly speedy, and you’re doled out with a consistent set of upgrades, allowing you to raise your stats and kit yourself out with nifty abilities, such as an electric jaw or a tough exoskeleton. Despite Maneater’s laid-back, relatively low-effort framework, the transformation aspect feels unexpectedly well thought-out, and is probably the best-crafted aspect of the entire game.

Though on the surface (sorry), Maneater might seem like a generic open-world RPG with a Jaws label merely slapped on it – and in many ways, it absolutely is – developers Tripwire Interactive deserve praise for cutting to the chase and not bloating their game out with hours of mandatory gumph.

The core campaign can be beaten within about six hours, and for many, that will certainly be enough given the game’s over-familiar loop of missions, which rarely venture beyond eating x number of fish or humans, hunting collectibles, and battling boss characters. It is a game designed to be speedy and frustration-free, as even if you do die, you’ll respawn at your grotto with nothing lost. Better still, as long as you’re not in combat, you can use fast travel to quickly dart between grottos.

But it can’t be understated just how loose and janky almost everything about the game’s core mechanics are, and while many may find it charmingly off-kilter, others will simply be irritated by it. Combat may be dead simple, but what passes for lock-on here is annoyingly slippery, and the jarring camera shifts between knifing and underwater modes can make it easy to lose your orientation.

But by far the most frustrating part of the game is manoeuvring on land, which in its worst moments approaches Goat Simulator levels of dubiously intentional clumsiness. Thankfully there’s very little land activities the player is required to complete in order to make it through the mainline experience. 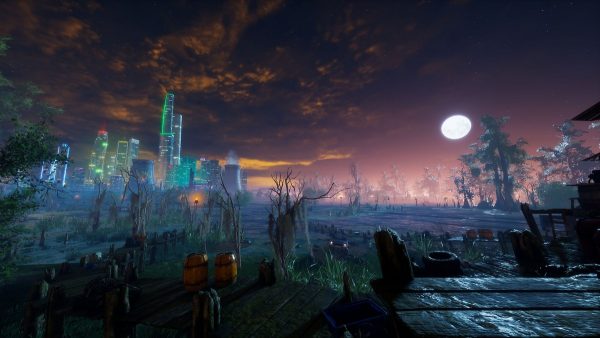 Technically, Maneater is meanwhile a competent yet totally unremarkable effort; graphically it mostly settles for being fine, but there’s nothing here which wouldn’t pass muster as late-last-gen or early-current-gen at best, even when played at 4K resolution.

It’s hardly ugly, but offers up little visual identity to distinguish itself in the open-world arena. Sound-wise, the hilarious aforementioned narration carries most of the aural weight and the sound effects are appropriately crunchy, but otherwise there’s little that truly sticks with the player.

Were Maneater not a thoroughly, wilfully daft game centered on a vengeful shark, it’d be far easier to dismiss as a generic me-too Grand Theft Auto clone, but its unique absurdity allows it to graduate beyond its formulaic schematic and oft-sloppy gameplay. Again, some may find the shocking lack of difficulty offputting – especially during the hilariously simple boss encounters – but if you’re craving a game to mindlessly unwind with, you could certainly do far worse.

That said, the steep £34.99 launch price makes it tough to give this a day-one recommendation considering the brief core experience and lack of replay value. Nevertheless, it seems likely that Maneater will win itself a cult of loyal devotees no matter its rather unambitious presentation and execution.

Maneater is a game which knows its limitations and refreshingly gets to the point fast, serving up a streamlined – if unpolished – marine-themed open-world RPG. 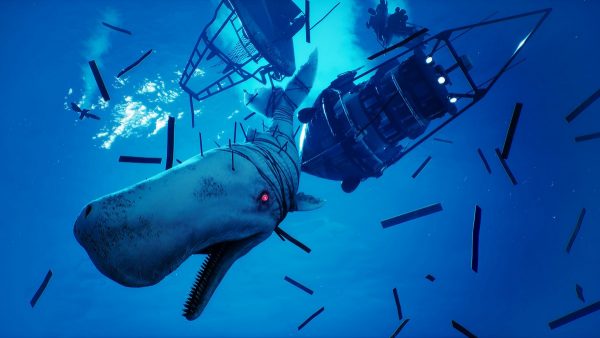 Cons:
– Missions are highly repetitive.
– Unrefined combat and controls.
– Mediocre visuals.
– May be too easy for some.

Reviewed on PC (also available for PS4 and Xbox One, with Nintendo Switch due at a later date).