Calum Petrie with a tale of Dungeons & Dragons… 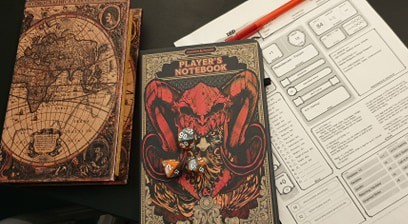 In this day and age, we are filled with so many different types of entertainment (this site alone covers a massive amount of pop/geek culture) that we have allowed our imaginations to dwindle and let comics, film, TV and video games to fill in the gaps where imagination used to be. What if though, maybe you dipped your toe into the world of tabletop gaming? Now I am not talking about the predictability of a game of  Monopoly, or even the ever-challenging game of Ticket to Ride – I am talking about picking up the pencil and paper and daring to venture into a world of Dungeons & Dragons.

The website Dicebreaker posted an article recently highlighting that even 50 years after its initial release, 2019 was the biggest year yet for the Wizards of the Coasts tabletop role playing game. I can understand that D&D can still be looked down upon by a lot of people in modern society, there is a stigma around those that dare to play the game. But I am here to tell you that you should cast aside your suspicions and honestly try it for yourself. There is a wonderful satisfaction to sitting down and being part of an adventure that someone is cannot give you a walkthrough for or activate a cheat code to complete the level – unless there is a Bard in the party.

Now the experience of finding a game of D&D can be a little scary. I only played for the first time myself last year, but I have not looked back since. I found out via friends and Facebook that there were local weekly groups who play sessions and are always open to new players. I messaged, asked if it was okay to turn up and I had a reply in two minutes saying that I was more than welcome – all the while nervous about entering something I had only watched Outside Xbox play on YouTube. 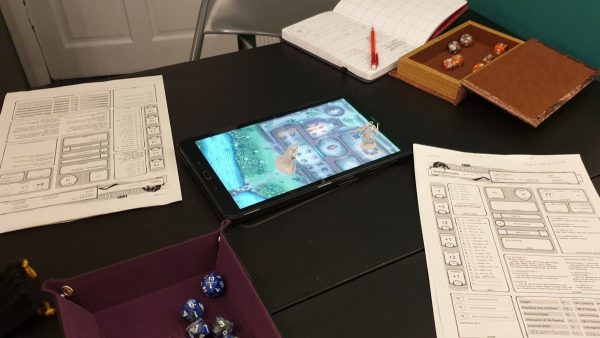 I turned up on the night, bought a set of dice and was greeted by some of the friendliest and wonderful people I have ever had the pleasure of chatting with. I quickly realised that this group of people were all from different backgrounds, areas and beliefs; yet much like their characters, they all craved adventure. It didn’t matter if you were the Tiefling Warlock, the Gnome bard or even the Goliath Barbarian (that was me); the fun came from the randomness of the experience, the wonderful mix of characters and the comradery felt from making an entire new group of friends at 31 years of age.

Fast forward to a few months later I was very much under the spell of the game. I had played as a couple of different characters and even ventured into a “Homebrew game”. The next logical step was to take the plunge and try to run my own game, though the only worrying point was that I didn’t really know where to start. I was not keen on spending 20, 30 or 40 pounds on an official adventure from the official Dungeons and Dragons line only to find out I was bot good at being the Dungeon Master.

One day as I was scrolling through Facebook, its search algorithms paired me with a company called The Arcane Library and I was pulled in straight away. The Arcane Library create pre-made adventures that are separate from the official Dungeons & Dragons lore but use the same game rules and character creation to run the campaigns. The advert was for a series of “One Shots” (a self-contained adventure that can be completed in one sitting), with 4 adventures that could link together or be played separately. Reading up on the website I realised that the adventures were horror themed and created with writings from Edgar Allan Poe at the heart of the stories. 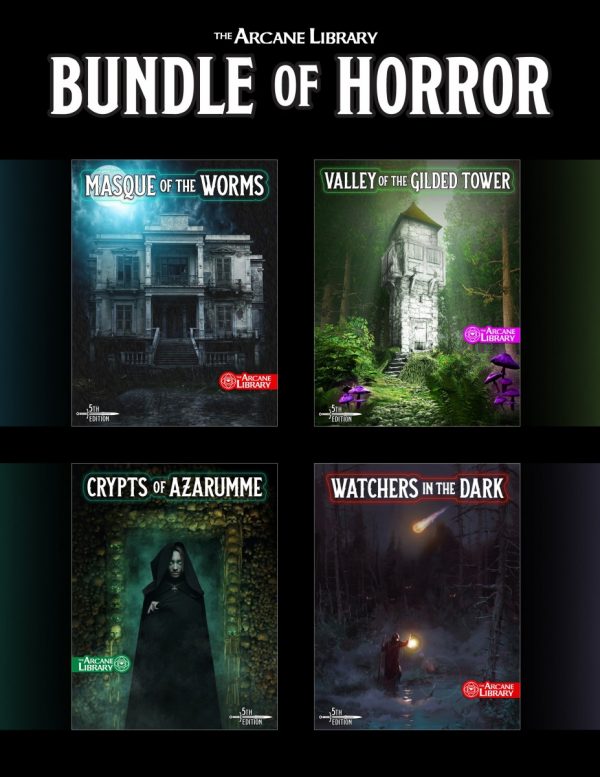 I took the plunge and bought the pack, then told the group I played with about it, only to find out that every one of them was wanting to take part in my adventure. Now the pressure was on. When I signed up to the site’s newsletter, I received a level 1 One Shot, and decided to run with that one first.

The Temple of the Basilisk Cult was the adventure I was going to play, and I was also getting extremely nervous about running as I felt there was an expectation with so many people wanting to play, including friends who were now interested in wanting to try D&D as well. At this point I decided to research the files I had purchased and was extremely delighted with what I had received. They contained an in-depth PDF file with a script, creature combat cards, battle maps (labelled and unlabelled), branching path options and hints and tips in case characters try to inspect or investigate plot devices.

Not only this, the Arcane Library YouTube channel has the creator, Kelsey Dionne, talking through each campaign and giving you a taste of the adventure she has created. All of these resources together helped me build my adventure and gave me a much better idea of how I should build the world for the players and how to make them feel involved and as invested in the adventure as possible. I also managed to speak with Kelsey on Twitter and get some last-minute advice about some end game suggestion on how to run the finale of the game.

The game night was upon me, I had so much interest that I was to run the same game twice, one for the experienced players (who taught me how to play), and the other for my friends with no D&D experience  (along with one veteran player to help them on their journey). I gathered all my resources, had my wall laid out like the worlds largest dungeon master screen; it was time to run my game. 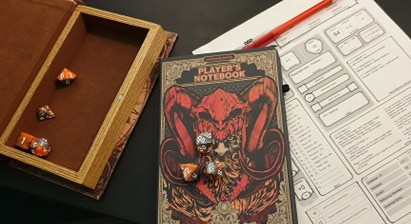 As I sat down and the nerves filled me and the group slowly got introduced to the world and story of “Temple of the Basilisk Cult”, an adventure that should last thee to four hours. A mere eight hours later we emerged with near deaths, team building exercises and an unexpected player created romantic subplot. I had been successful and had many a happy player; the feeling from creating the world for these players to inhabit was incredibly fun and extremely rewarding as it is an adventure that they will carry with them wherever they go.

The newcomers to D&D had an extremely different adventure – one one filled with charismatic players dodging combat, robbing traders of all their stock through teamwork and a barbarian that had cannibalistic tendencies.

If this has sounded absolutely insane, I wouldn’t blame you for not even making it this far. The wonderful things about these games are the players will create a lot of the of the adventure without you having to say more than a few words. I would tell anyone to be descriptive and give your players more to feed their imaginations and allow them to run wild with ideas.

Take your time as the DM to keep them on track, but never put them on rails and never take them on a guided tour around your imagination. Allow the players to feed you information that you can make up things on the spot and incorporate them into the adventure. The players and the DM will only get as much as everyone puts into the game. 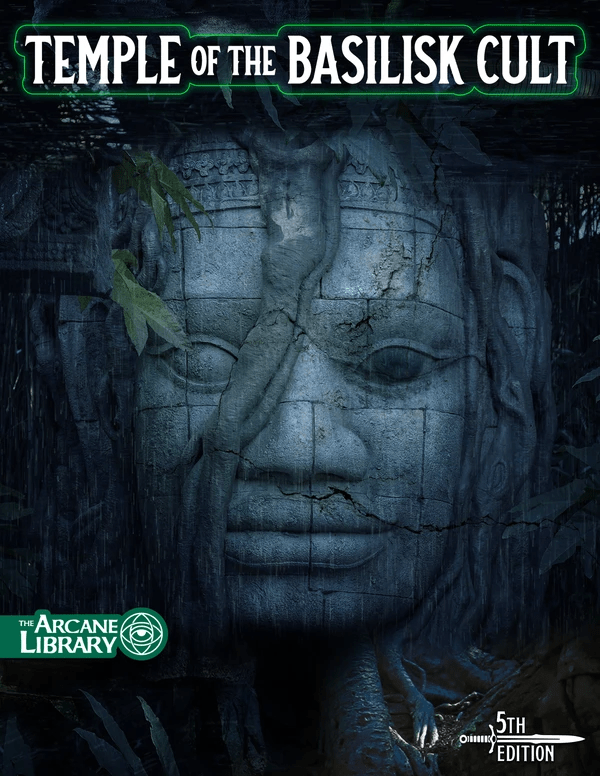 The journey I have been on with D&D for nearly a year now has been fantastic, I have learned a lot about the game, I have embraced the creativity of the experience, and I have listened to so much of the Critical Role podcast that I feel like I know the cast as good personal friends. T

The biggest element I enjoy from the overall D&D experience is the social aspect. When lockdown first came into enforcement, we automatically turned to Discord and using dice bots we managed to get our games back on track almost immediately. There was an automatic response from the group to continue – that being locked up in our homes was not going to stop us from hanging out and continuing the adventure.

I would not hesitate to order more adventure from the Arcane Library, as I have found all the resources you receive to be fantastic and supporting a smaller businesses during these strange times is always an excellent thing to do. The quality of product is superb and the packs are very well detailed; this should leave both new and experienced Dungeon Masters very confident in their abilities at running a one shot session, campaign or even building into your own epic saga.

I reach the end of my tale, and although it might not have had much point to a lot of people, I feel this is a story that I wanted to tell.  I wish to spread the good will of other people putting their creativity out there for everyone to experience and enjoy. The point I am getting at is …. everyone should try Dungeon & Dragons at least once with a good Dungeon Master.

Here are links for The Arcane Library website, Twitter and YouTube, and if anyone is interested at checking out the basics of the game, I would recommend giving DnD Beyond a look for all the information a new player could want.