Following the cancellation of the TV series Ash vs. Evil Dead after three seasons, Bruce Campbell publicly announced he has retired the role of Ashley ‘Ash’ J. Williams. However, during a recent discussion at the Mainframe Comic Con 2.0 (via ComicBook), Ash vs. Evil Dead stars Dana DeLorenzo and Ray Santiago, who play Kelly Maxwell and Pablo Bolivar respectively, claimed they could persuade Campbell to reprise his iconic role if the series was revived in the future.

“Well, I say, ‘Never say never,'” DeLorenzo said. “The way things are going, I’ve been reading all these very terrifying things about our industry and just productions and things are being shelved, so I honestly feel like never say never. There have been shows where they get cancelled but then they’re picked up by another network. I know Bruce has said he is in retirement but I feel like Ray and I could convince him.”

Santiago added, “I think enough time has passed by. He just needs a good one or two years of just like chilling in the woods and not having the Boomstick in his hands and then he starts to crave it and it’ll come back.” 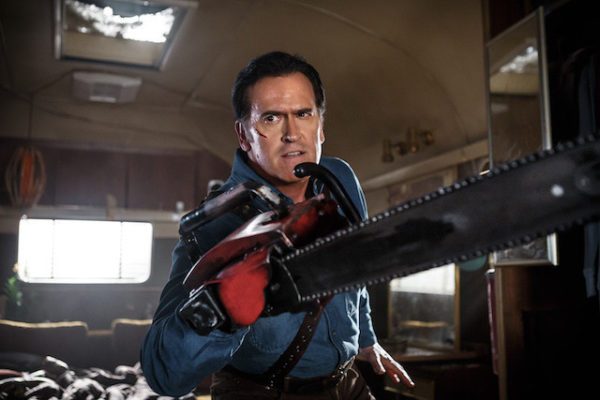 Unfortunately, despite the positive reaction from fans and critics alike, Ash vs. Evil Dead was cancelled after disappointingly low viewership numbers so the future of the series seems unlikely right now.

While Campbell may have retired from playing Ash, his work on the horror franchise is far from over as he will be working behind the camera and serving as a producer on the next Evil Dead film.

Do you think Bruce Campbell could return as Ashley ‘Ash’ J. Williams in the future? Do you think Ash vs. Evil Dead will be revived one day? Let us know in the comments below or tweet us @flickeringmyth…