Xbox Games with Gold for July 2020 have been announced and it’s a mixed bag of games.  This coming month will see players able to take part in rally races, compete with friends at basketball, rule the mean streets with a rod of iron and enjoy some colourful platforming fun. 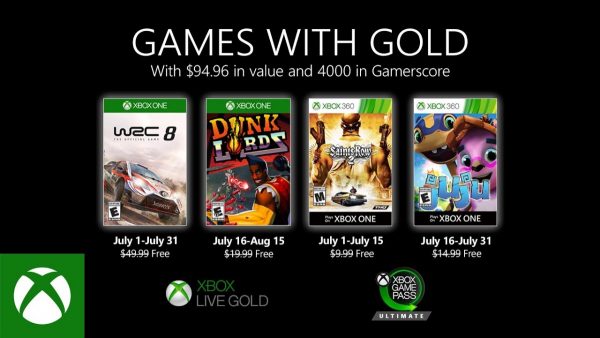 Kicking off July on Xbox One is WRC 8 FIA World Rally Championship.  This most recent title in the WRC series is the most authentic simulation to date and will provide many improvements over its predecessors, including new physics applied to all surfaces, a completely redesigned career mode and the addition of dynamic weather conditions.  As well as all new features, players will have access to 50 teams, 14 rallies set across 14 countries and over 100 stages.

From 16th July players will get prove to their friends who is the best baller with Dunk Lords.  This 2v2 basketball themed beat ‘em up allows players to choose from 20 basketball badasses, each with their own special attacks, insane abilities and over-the-top moves, and battle it out on a variety of different hazard-filled courts.

For Xbox 360 gamers (and Xbox One users via backwards compatibility) Gold subscribers can get Saints Row 2.  This more popular title in the franchise has players taking to the mean streets of Stilwater to help the 3rd Street Saints restore their place in the hierarchy and take back the city.

To finish off the month, subscribers can enjoy Juju, a colourful platformer that follows the adventure of shaman panda, Juju, and his lizard companion, Peyo, as they set out on a dangerous and mystical journey to save Juju’s father and the world.