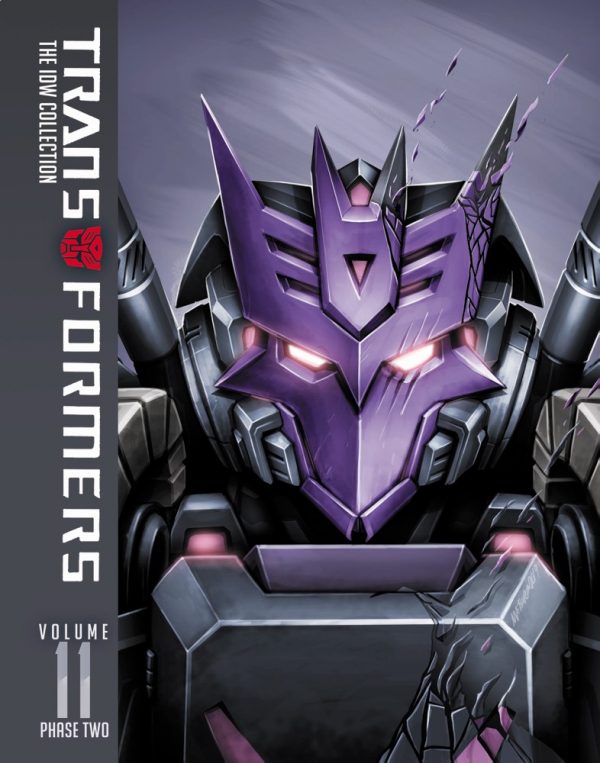 In the next installment of IDW’s Transformers collection, plenty of stories come to a head as writers John Barber and James Roberts begin the climaxes of their “second seasons” of their respective Transformers series. Transformers: The IDW Collection Phase Two – Vol. 11 features exciting action, tension and emotional depth as longstanding characters such as Optimus Prime, Rodimus and especially Megatron are forced to examine their roles and how to move forward – even if that means destroying everything they’ve worked towards.

On the Transformers side of the book, Barber continues Optimus’ growing role as a religious icon as the Camiens, a society of transformers from one of Cybertron’s lost colonies, view the Primes as powerful deities. It puts him in a precarious position, both personally and within the greater Cybertronian society as he has never fully subscribed to the religious notions of Primus as well as how it puts him at further odds with Cybertron’s leadership (namely Starscream). Prime’s development is intriguing as he finds a new meaning to what it is to be a Prime and how he can best work towards peace not just on Cybertron, but on Earth and throughout the galaxy as well.

The interesting thing Barber does is examine how this path potentially places Optimus on the same trajectory as other corrupt Primes such as Nova or Sentinel or perhaps even Megatron, seeking to expand Cybertron’s glory yet becoming a tyrant in the process. No matter what continuity or iteration in the vast franchise, Optimus has always been on the side of good and could never become a tyrant, but this story introduces some compelling questions for him. Barber’s deconstruction of Optimus’ role and how others are wary of his shift is well handled and makes for quite an interesting growth in his character.

While Optimus is facing a newfound role, things on Earth are moving to a critical point as some Autobots have been secretly kidnapped and Galvatron’s plans for the Decepticons and humanity take a significant step forward. Barber has been building the story with Galvatron and his search for ancient Cybertronian artifacts for a long while in the series now and he finally begins his endgame here. Barber brings the stories of Optimus and Galvatron together efficiently, tying Optimus’ new leadership role into his efforts to protect Earth from Galvatron. Very few plot threads Barber has introduced feel unnecessary. Even the brief detour of the Combiner Wars crossover from a previous collection gets paid off as Optimus has new allies in his fight for Earth’s freedom. However, he makes a very interesting decision to protect Earth that doesn’t sit right with a lot of people, humans and Cybertronians alike, and opens new doors for where his characterization can go while having dramatic consequences for the future of the series.

The other half of the collection deals with James Roberts’ More Than Meets The Eye and acts as a ‘finale’ of sorts for Roberts’ current story (though there are two issues remaining for the next collection). ‘Dying of the Light’ sees Rodimus, Megatron, Ultra Magnus and many of the other central characters betrayed and trapped on a planet at the mercy of the ruthless Decepticon Justice Division, who are not very happy with Megatron’s defection. It leads to a brutal confrontation that Roberts has built up ever since Megatron joined the crew in the seventh volume, tying up plenty of loose ends while examining Megatron’s development.

Roberts’ work with Megatron has been one of the most interesting characterizations of the Decepticon leader in years. It is has been very intriguing seeing him on a path to redemption and reckoning with his sins. Several of the beats Roberts has planted throughout this story, from Megatron’s dynamic with Rodimus and other members of the crew to the fate of some missing Autobots, come to fruition as Roberts’ long game pays off in some very big and emotional ways. Megatron dances between remaining an Autobot and confronting his fear of becoming a Decepticon once again. On the opposite end of that spectrum, Rodimus is forced to look at the type of leader he’s been and how his own leadership skills have led them to where they are. The contrast between both of their journeys is quite compelling as they reconcile the type of bots they want to be.

‘Dying of the Light’ has a lot of emotional fallout too as the high stakes of facing the DJD is not without consequences. There are quite a few characters, both on the Autobot and Decepticon sides, who don’t make it out alive and have to confront their mortality. Roberts nails the emotional components of the story quite well, especially for any longtime fans who have stuck with his run for so long. It really does feel like this is the end of a season and Roberts is unafraid to shake things up for the next arc in his story.

The collection also contains Transformers: Redemption, a one-shot focusing on the Dinobots as they are hired for a secret but important job on Cybertron from Barber. Redemption should satiate any Dinobot fans and is another interesting look at how post-war life has affected Cybertron and especially such a dangerous and war-filled group like the Dinobots. Barber examines how the Dinobots weren’t perfect in the war either, drawing a comparison between their actions and the Decepticons and Slug’s slow realization they not only need a new purpose, but have to fight for something better.

The art throughout the collection is all very well done. Alex Milne’s work on ‘Dying of the Light’ is probably the highlight as his character work, action scenes and page layouts are very detailed and easy to follow. Sara Pitre-Durocher and Andrew Griffith’s work on Barber’s Transformers is equally as good. While More Than Meets The Eye focuses more on the transformers, the main Transformers series has a hefty blend of bots and humans. The various Cybertronians are well detailed, whether they’re in the middle of a fight or just standing still, while the humans feature good facial expressions and body language. Livio Ramondelli’s work on the Dinobots make them quite an intimidating group along with their opponents. The colours from Joana Lafuente, Josh Burcham, John-Paul Bove and Josh Perez make the whole book very vibrant. There’s so much going on in the action sequences that it is worth pouring over the imagery to catch everything that is happening.

Transformers: The IDW Collection Phase Two – Vol. 11 contains some great stories with exciting character development for several of the bots on both sides of the war. Barber and Roberts play their long games very well as. they bring their stories to their climaxes while the artwork from the whole team shines. Fans of not just the previous IDW continuity, but of the franchise in general, will enjoy this collection.