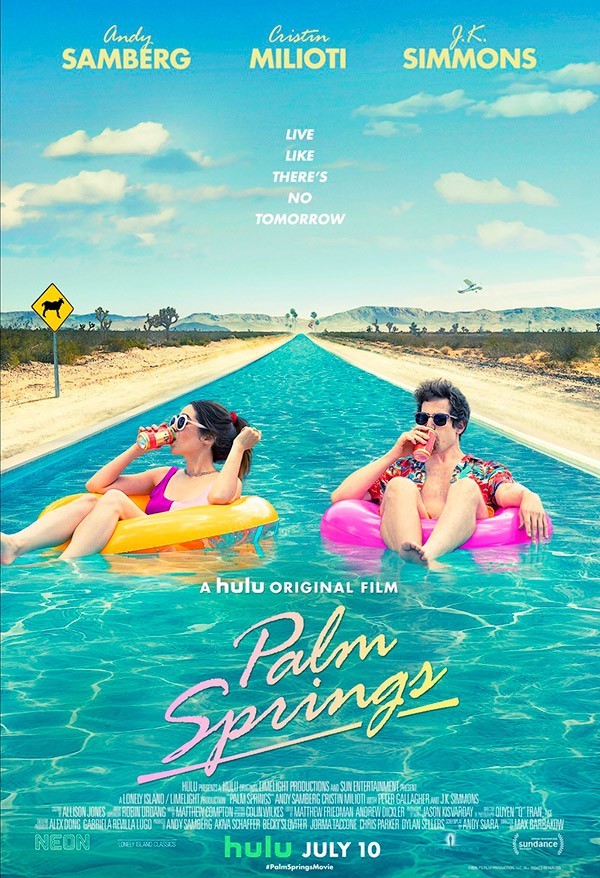 When carefree Nyles and reluctant maid of honor Sarah have a chance encounter at a Palm Springs wedding, things get complicated as they are unable to escape the venue, themselves, or each other. The time loop movie is certainly in vogue at the moment, with the likes of Edge of Tomorrow and Happy Death Day straying from the high-concept’s rom-com primer Groundhog Day, in turn dragging it into more adventurous territory.

Ironic it is, then, that the movie to most successfully reinvent this type of film is the one which most proudly wears its forebear on its sleeve – Max Barbakow’s new Andy Samberg and Cristin Milioti-starring sci-fi rom-com, Palm Springs.

While attending a Palm Springs wedding, alcoholic slacker Nyles (Andy Samberg) finds his humdrum life upended after a chance encounter with Sarah (Cristin Milioti), the sister of the bride and also a kindred trainwreck of-sorts. Nyles and Sarah quickly hit it off, but after a drunken sojourn into a nearby cave, they find themselves inexplicably trapped together in a temporal loop.

At the end of every day, no matter their state, they wake up in their own beds and start the past 24 hours all over again, a predicament which while initially novel also begs the question; how the hell do they escape it? If that’s even something they both actually want, of course.

Sensibly, Andy Siara’s script gets its most tough-to-swallow idea out of the way quickly, that rather than simply leave the loop’s cause unexplained, it’s the result of entering a mysterious, scarcely defined cave. It’s not the tidiest way to get the plot moving, but it’s functional enough, and is nothing if not entirely within the film’s generally loose, come-all wheelhouse. The cave at least feels like more of a storytelling necessity when certain revelations are made clear later, but as both comedy and drama the film clips along so jauntily that audiences are hardly invited to fixate on the practical mechanics much.

The winning evolution of the traditional time loop formula here is that, rather than an asymmetric romantic situation in which one side of the dynamic must trial-and-error their way into a relationship, both Nyles and Sarah are stuck in this thing together. It not only strips away any problematic potential for a rom-com being released in 2020, but provides a natural reason for these two afflicted people to stick it out even when they’re bristling; they need to figure this thing out one way or another.

The loop is such a naturally appealing concept that it sometimes prompts filmmakers to lean back on it without providing sufficient reinvention, but in this case the screenplay expresses a constant self-awareness of the expected tropes; the two leads frequently discuss the setup, albeit stopping short of cutely namedropping movies of this ilk.

Siara constantly find ways to keep switching things up, whether introducing an hilariously ridiculous foil for Nyles early on, or embracing the surreal, Mad Libs-style sense of humour the Lonely Island team – who produced the film, by the way – are best known for. As much as the film riffs on existential concerns and finds a vulgar-adorable comedic sweet spot, there are also countless creatively cartoonish cutaways to surmise the loop’s more outlandish potential, many of which feel like they belong in any of the comedy trio’s nutso music videos.

The film’s generally heightened approach to its already out-there premise certainly makes it easier to accept some of the less-convincing narrative contrivances in the third act, as it struggles to find a means through which Nyles and Sarah might finally be able to exit their situation. And yet, despite its wanton, rat-a-tat silliness, what grounds Palm Springs in our own world is its thorough emotional plausibility; this is a deceptively insightful rendition of a familiar concept, extended far beyond the usual parallel that, even outside of the loop, people tend to live every day more-or-less the same.

If the physical mechanics of the loop are kept mostly ambiguous, there’s a more tangible, deeply felt quality to the emotional ones, informed by some genuinely poignant surprises, and a couple of unique perspectives on how being trapped in the same day might affect the human psyche – both for better and worse. Where some see repetition and tedium, others see stability and order.

Yet for all of its musings on the progammatic nature of living, there is at all times a canny balance between light and dark. Whether indulging fully in its more loony comedic sensibilities or actually trying to say something genuine about the human condition, it never feels out of step tonally; it retains a holistic mood throughout, largely as a result of the tack-sharp performances from Samberg and Milioti.

If Samberg doesn’t seem to be reaching far outside of his slacker goof comfort zone here, there is certainly a deeper emotionality to his character, one which he depicts in impressively subtle fashion, with a flattened, knowing affect which shouldn’t at all be mistaken for broad aloofness.

Milioti, meanwhile, proves delightfully irreverent as his more strident, forthright partner-in-time. Her strong-headedness is juxtaposed against Nyles’ seemingly lackadaisical attitude, yet thanks to their exceptional chemistry and the generally self-aware writing, this is far more than standard opposites attract meet-cute fare. The supporting cast also sings, especially a typically grizzled J.K. Simmons as a man at the wedding with a very particular vendetta against Nyles, while Meredith Hagner is hilarious as Nyles’ ditzy, low-effort girlfriend Misty. June Squibb also pops up for a brief role as Sarah’s grandmother, and makes the absolute most of the few lines afforded to her.

If comedies often catch flak for their unassuming, anonymous visual style, Palm Springs is once again a credit to its genre, its persuasive writing matched by Quyen Tran’s (Deidra & Laney Rob a Train) crisp lensing and precise framing. Movies of this sort are of course uniquely indebted to their editorial department, and thankfully Andrew Dickler and Matt Friedman not only handle the central conceit gracefully, but they’re also able to make the best of the film’s rambunctious reliance on cutaway asides.

The only slight frustration in the technical package is the rather mediocre visual effects, which from an opening digital earthquake onward look no better than what you’d expect to see in your average YouTube Premium Original.

Time loop movies are inherently messy, and the ones that tend to fare best with audiences are those which embrace the messiness. To that end, while it’s clear that Siara struggles to write himself out of a corner in act three, and there’s ultimately a somewhat unsettling implication here about the central wedding, the overall conceptual concreteness of the setup and characters makes these qualms easy to forgive. It moves lightning fast, it’s peppy as hell, and says something real about human life without getting any more gooey than it needs to. Bravo.

Palm Springs proves there’s plenty of life left in the time loop subgenre when smart filmmakers and a charming cast are involved.