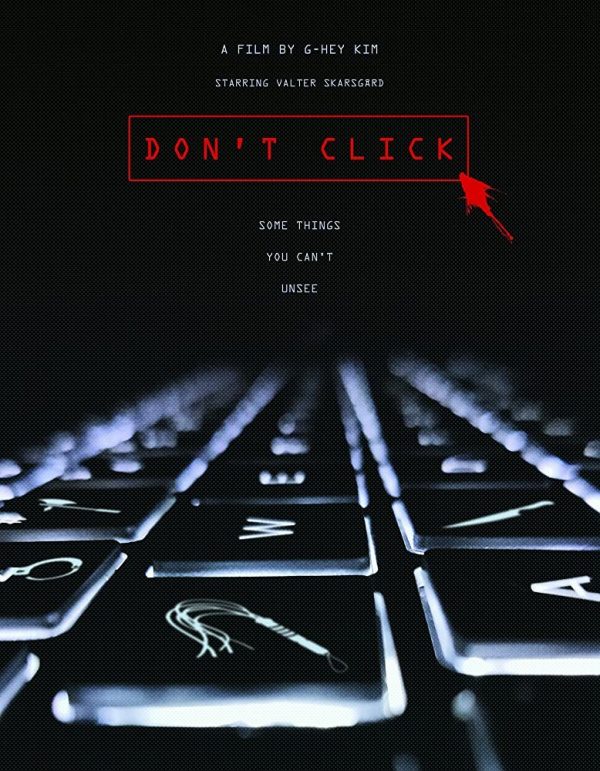 After accessing a pornographic website, two men wake up to find themselves trapped in a dungeon with a supernatural entity.

Filmmaker G-Hey Kim adapts her hit festival short Don’t Click into a full feature, proving the difficulty inherent in expanding short-form projects into something bigger. Despite its potential as a giddy homage to cautionary cyber-horrors like Brainscan, Don’t Click is a spectacularly ill-conceived misfire from top to bottom.

In 2020, movies about the perils of video games don’t really cut it anymore, so Kim’s film aptly focuses on the prevailing noggin-rotter of the last two decades – of course, the Internet. After a night out, student Josh (Valter Skarsgård) returns home to find his roommate Zane (Mark Koufos) missing.

It’s an enticing enough setup for a prospectively barmy riff on Hellraiser x A Nightmare On Elm Street, a nutso thriller shot through the lens of contemporary misogyny. Yet while Kim’s film clearly has a keenness to examine the anonymous avenue the Internet gives us all to indulge our darkest desires, Don’t Click is both incoherent and tedious as a piece of storytelling and character work.

While certainly not posing as anything less than ridiculous – one of the lads’ two tormenters looks like Freddy Krueger kicked throw Saville Row – once the particulars of the setup are established, it quickly settles into a groove that’s only as boring as it is actively grating.

The bulk of the film, which mercifully runs only around 80 minutes, sees viewers ping-ponged between the real world, the cyber-world, and flashbacks to Josh and Zane’s cheerier past. The cyber-dungeon scenes, clearly intended to be the focal attraction, are severely impacted by one terrible stylistic choice; opting to present them in a garishly low frame-rate.

Considering these scenes account for maybe 40% of the entire movie, it makes Don’t Click an inherently frustrating, ugly sit, and proves even more irritating when Kim cuts between footage of different frame-rates within the same scene.

This is without even getting to the script, which tiptoes on the fringes of coherence, and even when it does make sense, the hilariously inane dialogue spells out every aspect of the story far too enthusiastically. Throw in some old-hat reality vs. unreality parlour tricks as Josh attempts to figure out which way is up and you have the makings of a bargain basement stab at something like David Cronenberg’s eXistenZ.

The film is held up almost single-handedly by Valter Skarsgård, who while unable to make much memorable of Josh, is at least thoroughly believable as the laid-back college student forced to confront the predilections of himself and those around him.

But he’s ultimately left to shoulder far too much of the movie, and with such feckless material, he often ends up just mumbling to himself. Meanwhile, Catherine Howard certainly commits herself to the part of Maya, the spectral form of a woman Zane watched be tortured, even if some may take issue with the film’s attempts to confront misogyny by itself featuring plentiful sights of her character being stripped and abused.

There are, at least, a few grisly moments that hit the mark, though their placement as sheer torture for its own sake may deter some. A sequence involving a delicate body part and a garrote is sure to leave audiences squirming, though much of the violence is likely to strike many as too miserable and dour for its own good, especially given the expectation of chintzy schlock that the movie’s title and setup suggests.

But a few potent dashes of the red stuff can’t forgive a film that’s at once a facile social commentary and neither dramatically potent nor much fun. Yes, the Internet can be a vehicle for humanity to explore its dark soul, but where is the creativity here to explore that theme?

This is an unfortunate case of a short which should’ve stayed a short; the worst thing that can be said about Don’t Click is that despite doing so many “wacky” things, it’s really a tiresome bore, with flashbacks and repetitious segues desperately padding it out to feature length.