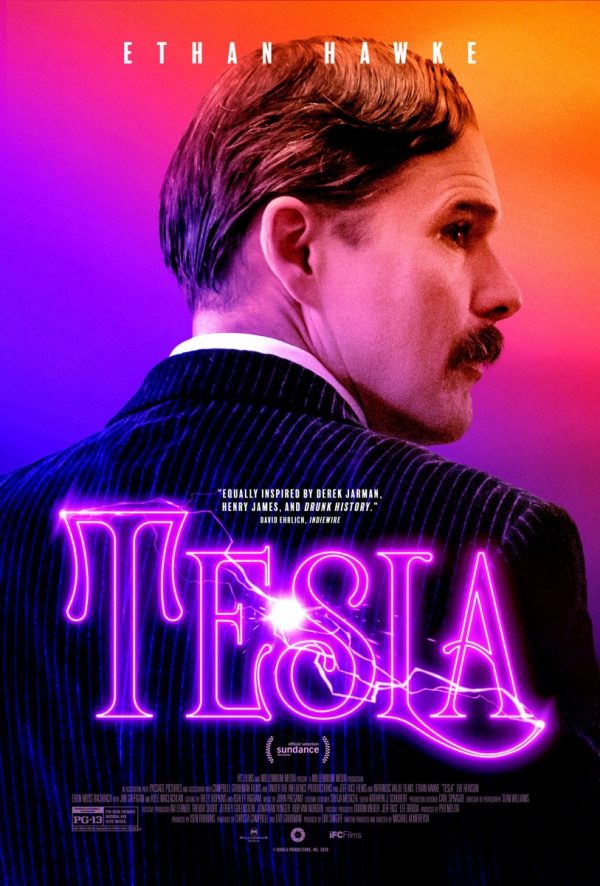 A freewheeling take on visionary inventor Nikola Tesla, his interactions with Thomas Edison and J.P. Morgan’s daughter Anne, and his breakthroughs in transmitting electrical power and light. 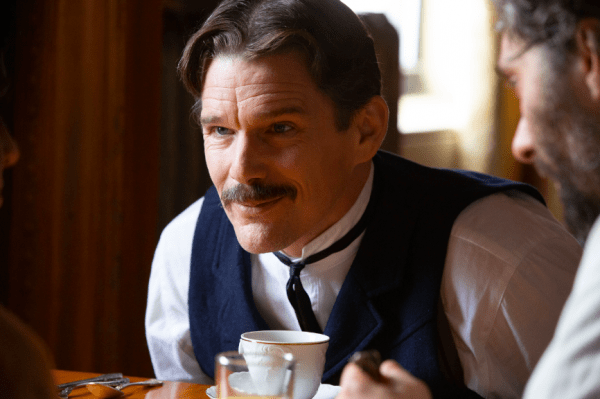 A philosophical question is posed at the beginning of Tesla; is nature a gigantic cat, and if so, who strokes its back. The fascinating rumination is also narrated to the introduction of filmmaker Michael Almereyda’s interpretation of Nikola Tesla; brooding with soft intensity portrayed by Ethan Hawke in a performance so deliriously strange it actually feels normal when he does his own rendition of ‘Everyone Wants to Rule the World’. And I don’t mean Tesla just starts anachronistically singing the lyrics during a conversation, I mean the film breaks away to something along the lines of a music video, which considering the lack of a budget for special-effects is compensated with static backgrounds, actually wouldn’t look out of place in such a thing. Yes, this movie is just as bizarre as its subject; a man with no sense of humor, all seriousness, and ambition far beyond his time that ended up as a prophecy for how we live today.

It goes without saying that this is no ordinary biopic (anyone familiar with Michael Almereyda’s directorial features knows he is both interested in robotic and cold individuals, and approaching the study of historical figures from unique perspectives), going as far as taking the expository elements of the real-life figures included to comb-over relevant information (both common and uncommon) as fourth wall breaking interludes delivered by Tesla’s romantic interest Anne Morgan (Eve Hewson.) Yet Tesla still feels oddly restrained, as if the filmmaker is nervous to fully embrace an idiosyncratic tone. As a result, I would say the first half of the film flirts more with being a traditional biopic more than the insightful portrait of a socially awkward mastermind. 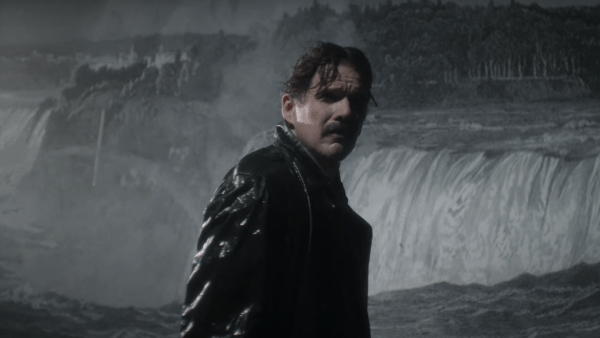 As much as I don’t want to bring up The Current War (don’t watch it, even if the cast is tantalizing), a great amount of watching Tesla felt like receiving that same information but competently and with a more focused study of Tesla. Ethan Hawke is magnificent as the genius outcast with the film episodically jumping around from his days working with and getting screwed over by Thomas Edison (Kyle McLachlan), partnering up with George Westinghouse (Jim Gaffigan), and all the barriers between his relationship with Anne who gradually grows into a strong character asking him heavy questions about his work and what he even wants to accomplish.

In that regard, it’s always engrossing from character perspectives unlike that abomination from last year. A little over halfway, however, Michael Almereyda begins exploring Tesla’s growing obsession with the possibility for a digital world and experiments that are not only costly but impactful on surrounding communities. He doesn’t just become more of an outsider, it also tests his strongest connections with humanity. Sure, Tesla might be compared to Experimenter as they are both unorthodox biopics from the same filmmaker, but it has more in common with Marjorie Prime than anything as it studies distant humanity and people functioning more like a system rather than a human being with emotions. Additionally, Tesla also shows how capitalism gets in the way of those grander ideas. 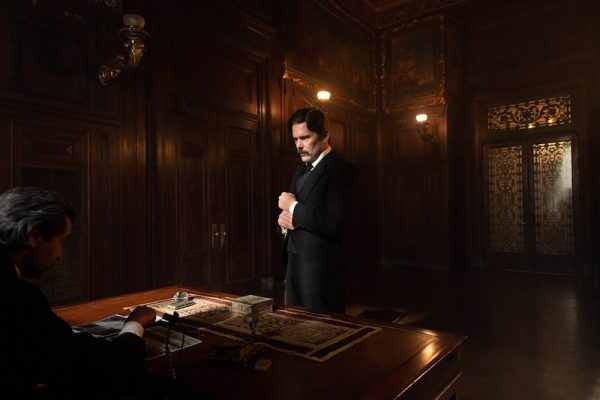 The narrative also starts to feel less like a biopic during that second half and more of a refined understanding of an offbeat pioneer. Again, the story itself is always emotionally distant but it’s clear that Ethan Hawke has more to chew on as an actor when the movie is not showing us Tesla’s ups and downs with tacked on Wikipedia information read out loud. Put it this way, easily one of the best scenes in Tesla comes early on with Tesla and Edison’s conflicting ideologies presented as an ice cream fight. Immediately after, the narration kicks in telling us that the ice cream fight, obviously, didn’t happen. The first half definitely needs much more of this Drunk History style playfulness to offset some of the more familiar biopic tropes until the second half really generates electricity as a character study. At the same time, there is something deeply wrong with you if you have no interest in a biopic where Nikola Tesla and Thomas Edison get into an ice cream flight.