With the summer of 1980 coming to a close, children returning to school and nights drawing in it was up to people to once again return to indoor pursuits, namely videogaming.  Those who had preferred the sunshine to the dimly-lit arcades returned once more to enjoy the electronic displays of exciting games, computers and consoles were dusted off and turned back on and people started looking in their Argos catalogues and visiting the counters of their local department stores for new purchases that would see them through the more miserable British months. 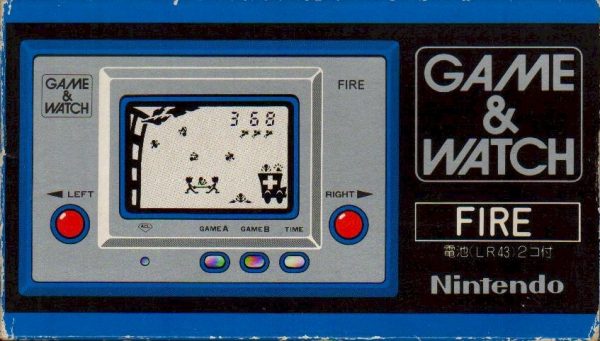 One such new purchase that people would see under those glass display counters would be Game & Watch – Fire (or Fireman Fireman in the U.S.) from Nintendo and like all Game & Watch titles, Fire was incredibly addictive and fun to play.

This little handheld had very simple gameplay that was thoroughly enjoyable for people of all ages.  Players took control of two little fireman attending a burning building, though rather than putting out the fire they were rescuing the thousands of people who had somehow ended up inside.  Using a trampoline, players would have to move the fireman left and right to ensure the jumpers would bounce straight into the waiting ambulance.  Jumpers had various spots they could land and as time went on the game grew more difficult with multiple jumpers requiring multiple bounces to get to the ambulance.  Every person reaching the ambulance would net the player 1 point. 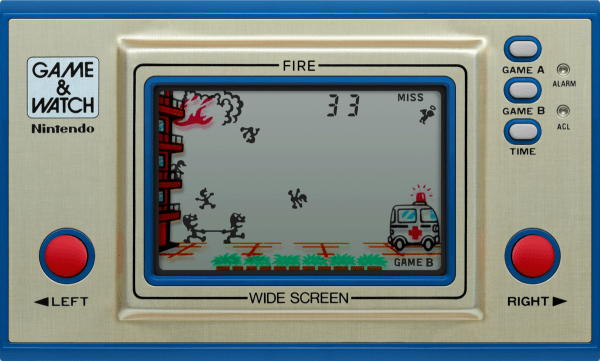 Fire was also the inspiration behind the special move for Mr. Game & Watch in the Super Smash Bros. series where two firemen would catapult him up with a trampoline.

Missile Command was the big game hitting the arcades and had queues of players lining up their 10p coins to get the coveted top spot on the scoreboard.  Such was the game’s popularity that it was ported to Atari’s 2600 console and the Atari 8-bit computers the following year, the Atari 5200 console in 1982 and a clone made for practically every 8-bit and 16-bit computer going.  It even managed to get a bit spot in the film Terminator 2.

In Missile Command players have six cities that are constantly being attacked by nukes.  As the only commander of 3 anti-missile defence platform belonging to this woefully unprepared civilisation, it was up to players to launch counter missiles at the incomings and destroy them in an ensuing firey blast.  Each of the three defensive platforms had a limited number of missiles that could be used during the level and once a platform had used their quota it was then useless for the rest of that level.

Success at the end of the level was based on the amount of missiles and cities remaining but once all cities had gone it was all over, although scoring enough points could replenish a lost city.

The video below by Steve Benway provides a glimpse of the Atari 2600 version of Missile Command.

Another popular arcade game of 1980 was Polaris by Taito.  As well as gaining popularity in the arcades it was also released on the Atari 2600 and the Commodore Vic-20 home computer, fans of the cheap (and frankly rubbish) Popstations may also have seen a version on those little LCD displays released about 10 years ago.

In Polaris players took control of a little submarine that is constantly attacked by an assortment of enemy planes, submarines and ships.  Although enemies would drop bombs, depth charges, fire missiles and torpedoes, our submarine would only fire upwards (presumably Polaris missiles) so manoeuvring and timing of shots was critical to surviving.  The problem with the player’s sub’ however was that everything on the screen (excluding the water) could destroy it.

Like many arcade games of the time, there was a limit on how high a player could score.  The arcade machine would only record a player’s score up to 99,990…….. providing you were good enough to survive the increase in difficulty. 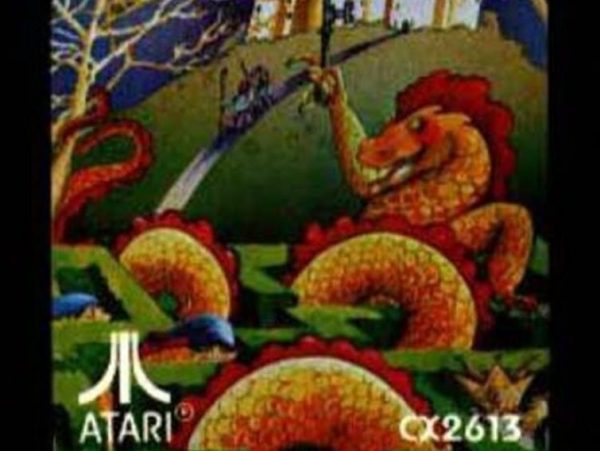 Adventure is the final game we’re looking at this month and it may come as no surprise that this appropriately named game is a graphic adventure released on the Atari 2600.  The game’s actual release month is actually up for debate with some saying it was July, others saying September and other months (if you know for sure please get in touch).

In this game players take the role of a small square avatar who must roam a large environment made up of many rooms filled with enemies, including a bat and dragons.  Players are tasked with finding the Enchanted Chalice that has been stolen by an evil wizard and returning it to the Golden Castle though this task isn’t as easy as it sounds.  Our avatar can only carry one item at a time and puzzles involve opening multiple coloured doors with the same coloured keys.

Adventure is an exceptionally special game in the history of gaming, it is generally regarded as the first action-adventure game ever made, it was the first console game to involve multiple screens and enemies that would quite happily follow the player onto another screen but it is most famous for its introduction of the Easter Egg.  Story has it that back in the day Atari didn’t like programmers putting their names down in credits, but developer Warren Robinett managed to squeeze in a hidden room that contained the message “Created by Warren Robinett”.  If it wasn’t for this chap we wouldn’t have the Alien frozen under the bridge in GTA V, the Indiana Jones skeleton in the fridge in Fallout: New Vegas, Monkey Island’s Guybrush Threepwood making an appearance in Star Wars: The Force Unleashed 2 (I even saw an old Tesco carrier bag on the floor among rubbish in State of Decay 2) and the many thousands of others that have given people so much pleasure in finding.

Steve Benway has a chat while playing Adventure in the video below….

Thanks as always to Steve Benway who always makes excellent videos on his YouTube channel.  Make sure to subscribe, leave likes and ring that notification bell and all the other things the cool kids of today are doing.

Be sure to check back with us next month for more games of the 80s.