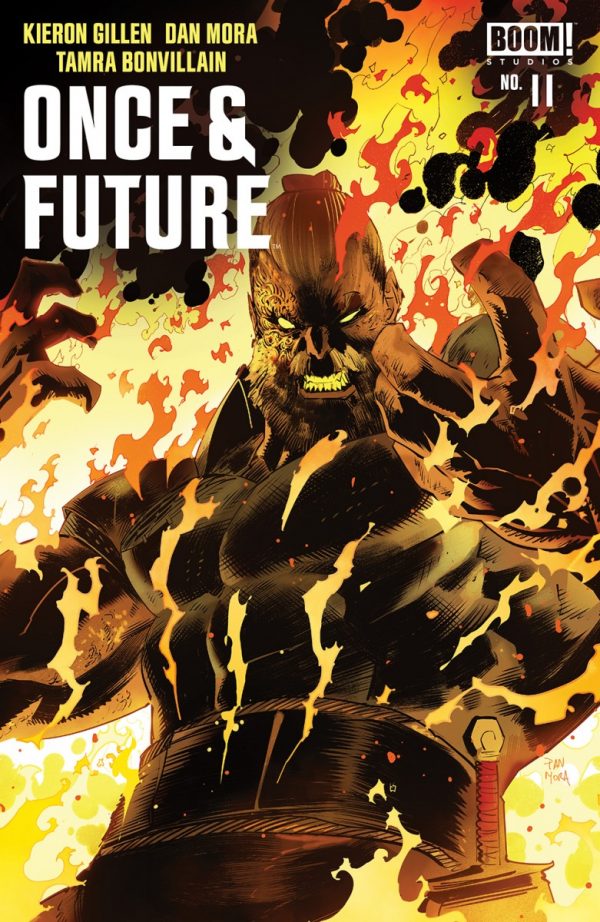 The twisting trials and turbulent torment that Duncan and his gran continue to face are thrown into a bloody and gruesome issue in Once & Future #11.

To catch us up from last time, Grendel is on the loose and has located the nursing home in which Gran is situated. Duncan is on route in a taxi to try and get there before any harm be falls the residents and more importantly …. his Gran.

Issue #11 plays out in a strange way where all the action is packed into the first half of the comic, and the later half breaks down to a more dialogue heavy affair. Though the second half of the issue starts to answer the question the reader might be coming up with – one of those questions being “How can this all go on and nobody knows about it?”. Well, the answer is that the government knows and grants them a wide berth.

The issue does come across surprisingly lacklustre for me. I felt the Grendel fight was not great and the whole affair just appeared to be a little …. boring. The lack of story did come second to the beautiful frames in which we see some of the most gore filled panels of the series to date – not to mention the introduction of a chainsaw and blood soaked pensioners. If that is not a sight to behold, then maybe we just have a different definition of exciting.

Once & Future #11 is very much a mixed bag and I was left disappointed when the issue came to a predictable cliffhanger. However, as a whole, the series still continues to be one of the best things I am reading at the moment; the glimpses into the ethereal other world and peaking in on Arthur behind the curtain makes the overarching story much more interesting.