Now is the perfect time to grab yourself a bargain as Focus Home Interactive are running their Publisher Weekend on Steam.  Until 14th September gamers can get up to 85% off on some of the publishers best selling titles and DLCs. 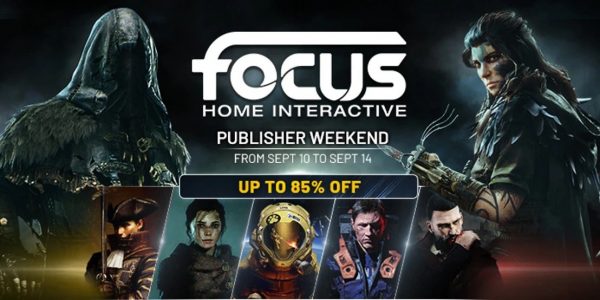 The Focus Home Interactive Publisher Weekend features discounts on the publishers bestselling titles and recent releases.  Enjoy great discounts on games such as 66% off A Plague Tale: Innocence and The Surge, a 50% discount on Greedfall, 75% discount on Seasons After fall and 25% off the recently released Othercide.

Would be farmers can get great deals on GIANTS Software’s Farming Simulator 19 and its many DLCs while extreme driving enthusiasts can get an amazing 70% discount on Mudrunner: American Wilds Edition.

FPS fans can get 50% off on New World Interactive’s intense modern tactical FPS Insurgency: Sandstorm which has received several huge updates since it has released, bringing plenty of new content including night maps and new weapons.

Visit Steam now and get a great discount on great games with the Focus Home Interactive Publisher Weekend.