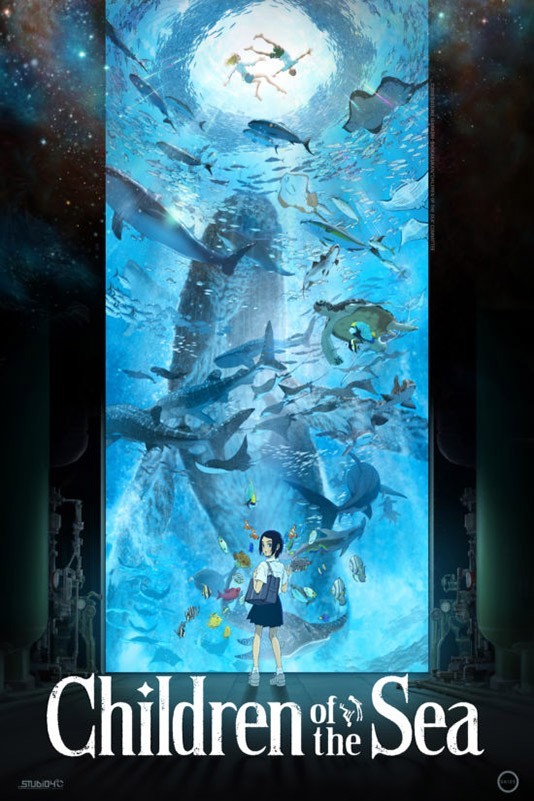 When a young girl befriends two siblings who’re uniquely linked to the sea, she begins to experience flashbacks to her childhood and the strange sensation that the ocean might be calling her home. 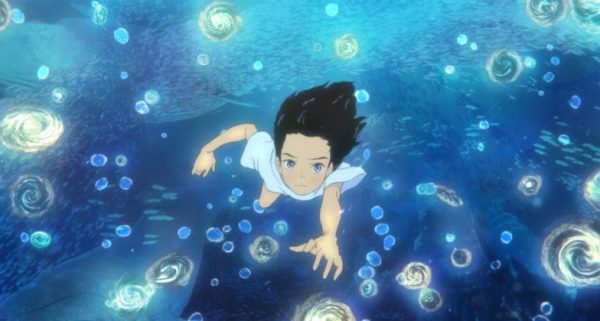 Floating in the water just below aquatic animated classics Ponyo and Song of the Sea, you’ll find this beautiful yet befuddling anime. A metaphysical coming-of-age tale that features some of the most sublime animation and narrative intrigue (translation: what on earth is going on?), which sadly drowns in unwieldy pretentiousness come the final act.

Honestly, we’re so spoilt when it comes to the standard of animated output these days that you can often forget to pause and breathe it in like a fresh coastal wind. Children of the Sea reminds you to do that repeatedly.

Sunflowers against a pastel blue sky, a bicycle being consumed by overgrown foliage, a 180 rotation through a red night sky that’s dizzying and astonishing. There are so many stills and sequences which are breathtakingly rendered that they’re the stuff of art exhibitions.

As impressive as this visual feat may be, there’s only so far this will get you in a film touching two hours, and the story of a young girl drawn towards the ocean ebbs and flows like a slow moving tide in terms of patience testing interest.

Ruka, our young protagonist, is a fascinating character. Early on we see her stand up for herself on the sports field, only to be condemned for it. She’s that archetypal kid who is yet to find their place in the world. Her relationship with her parents also offers up a strange dynamic. Her father works at an aquarium that she has avoided since being a small child (which for an eco-centric film is sadly never really condemned), and her mother is largely absent throughout. It all adds to the mystery of why she is being called to the sea. Who is she? Why her? How much of it is actually answered? Your guess is as good as mine.

Your overall enjoyment of Children of the Sea will depend on whether you take the Terence Malick sized leap of faith which occurs in the final act. There’s enough interest in what’s going on with Ruka and her strange new water-sibling friends, even if they’re also a tad one-dimensional and dull, to carry you to the point-of-no-return, but then this goes off the deep end.

Children of the Sea evolves into a flurry of Fantasia-style kaleidoscope streaks and flashes as the film goes all 2001: A Space Odyssey. Unquestionably gorgeous and transfixing, but it only goes to emphasise how the plot is getting lost amongst the white-water of the spectacle. Any emotional impact from this young girl’s journey is swept away.

Skies have rarely looked as stunning, and the oceans are rendered as visual poetry in a way that makes the waters of Finding Nemo look like a London tributary, but a wonderful build-up soon capsizes under a tidal wave of excess.