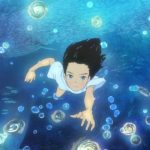 GKids has revealed a new trailer for director Ayumu Watanabe’s anime feature Children of the Sea, the upcoming adaptation of Daisuke Igarashi’s prize-winning manga of the same name; watch it here… When Ruka was younger, she saw a ghost in the water at the aquarium where her dad works. Now she feels drawn toward the […]