If there was ever a definitive example of creator Ryan Murphy’s creative interests and style, Ratched is surely that. From the darkly whimsical tone to the masterclass in camp acting, this new Netflix series is everything you’ve come to expect from the man behind Nip/Tuck and American Horror Story.

Now for some people, that will put them off of this show. For others, that will make them foam out the mouth in anticipation. Ratched is Murphy at his most insane, but there’s also such brilliance in the filmmaking and acting that it’s hard to discredit the great work here. Sure, there’s a quadruple-amputee with a serious bratty side, a crazed priest killer, and Sharon Stone with a pet monkey…but that’s what you come to expect when starting something from Ryan Murphy. But most people will be tuning into Ratched for the fact it’s a prequel to One Flew Over The Cuckoo’s Nest, and that’s where this series will put some people off. While just as dark and horrific as the 1975 classic, the story and the character of Nurse Ratched have placed their evil somewhere other than with the patients. The series focuses heavily on Mildred Ratched, the sadistic nurse seen in One Flew Over The Cuckoo’s Nest, as she fights to take control of this Northern California hospital. While the original film saw her take her angry and cold attitude out on the people she was supposed to be caring for, in this series…she’s out to hurt her peers and people above her.

It’s a shift in focus that will surely piss off viewers, but I was simply happy to see that Nurse Ratched was still an evil, horrible person. There were fears that she’s fall into the trope so many filmmakers are doing now by adding a “but look at how the world made them this way” layer to their work. Yes, the character does have a sad backstory, but there’s never one time I felt the show was trying to make this character seem better than what she was. She’s out for blood, and while she doesn’t want to hurt people who don’t need to be hurt, she’s still a monster deep down inside. Starting with the centerpiece and namesake of the show is a very good place, as the show is in love with the Ratched character as much as Ryan Murphy loves working with Sarah Paulson. Like any season featuring the actress, you see that Murphy takes very good care of her when it comes to giving her the juiciest drama and some of the best moments for brilliant acting.

Paulson’s take on Mildred Ratched is very different from what Louise Fletcher established decades ago, but there are connective threads that don’t make them feel too far off from each other. As earlier noted, this version of Ratched is still a dark and twisted woman, but she believes what she is doing is for the best. The heinous actions seemingly way heavy on her, but she keeps doing these twisted things, so it makes you wonder how much she really cares. That’s something I very much enjoyed as the show made you switch on your feelings for Mildred Ratched often. And by the time the series ends, you start seeing she’s on the path to ending up as cold and heartless as she was depicted in the 1975 film and its original novel. To keep this as spoiler-free as possible, there does need to be more to this series to fully see this character as the true predecessor to the Ratched we know, but this feels like a good start to this journey.

And that’s something people need to know, the series Ratched feels like the very early beginnings of the titular character. There’s a moment early on when Mildred goes out of her way to help a patient who is being tortured, and it feels incredibly out-of-character. Then, even moments later, you see her lie and manipulate her way to protect someone, and you feel like there’s a battle on how to depict her character. At times, it feels intentional as you see her going down the dark path, but it’s also something I know will anger people who claim to be purist of the source material. 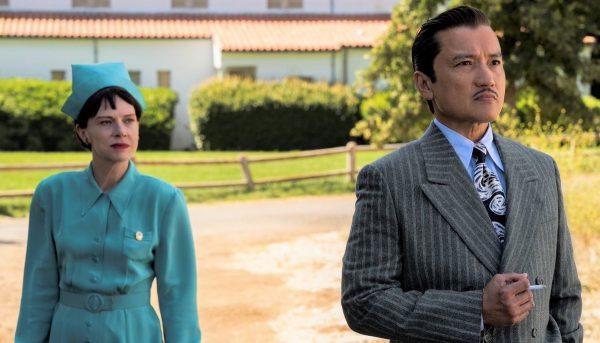 Moving away from how the main character, it soon becomes easier to compliment things freely. The rest of the cast is filled with a colorful group of characters, all more messed up and twisted than the last. Jon Jon Briones steals every scene he is in, commanding the attention when needed, and cowering back into the shadows easily. Briones truly works well with just about every character he sees, but he’s the best when working Judy Davis.

Which let’s just start the Judy Davis love-fest now, because wow, she almost makes this the Nurse Betsy Bucket show! The iconic film, television, and theatre Australian actress Judy Davis is the glue that holds this whole thing together. Without her, I don’t think the show would have its heart & soul. Nurse Ratched is the vessel for this story, but Nurse Bucket proves to be what makes its blood pump. The other standouts include Finn Wittrock as a killer with a complicated story, Cynthia Nixon, as the surprisingly key role of Gwendolyn Briggs, and one of my other favorites Sophie Okonedo as Charlotte Wells. Okonedo shows up a little late to the party, but she makes herself known with a killer role. The show juggles a lot of characters, something than Ryan Murphy shows have struggled with in the past. Thankfully, almost everyone is Ratched is worth the watch, so you don’t mind getting to spend whatever time you have with these strange people.

The last bit that needs some praise is the overall look and feel of the show. A round of applause to the entire art department as they made this show a completely immersive feeling. The costumes are bold and beautiful, the sets range from creepy to vibrant, and the overall style feels so faithful to the time period being depicted. Sarah Paulson feels like she was meant to be in cinema from the 40s and 50s, as she wears everything so well; she feels ripped straight out of a classic-era Hitchcock film. 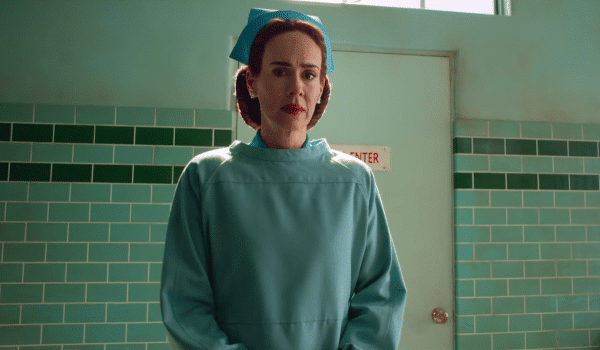 It’s not just the material on set that feels vintage as well. The editing features wipe transitions and paneling that feels straight out of a noir film. Many people see wipes in movies and tv and go straight to Star Wars, but this is paying homage to a very classic motif we see from the Golden-Age of Hollywood. The same goes for the score that I had to check wasn’t straight-up lifted from vintages movies as it felt so perfectly on-brand. Composer Mac Quayle blessed this show with his powerful score, something that I want to listen to repeatedly. Take any piece of music from this and dub it over a noir, like Touch of Evil or The Lost Weekend, and you’ll see how perfectly it captures the mood.

For people who love this era of film, you will have a wonderful time seeing it captured so well. Little attention to details like that goes a long way with making you sink into this universe even more. Fans of Ryan Murphy’s work will surely enjoy Ratched. Now, this will be a harder sell to purist of One Flew Over The Cuckoo’s Nest, but hopefully, any personal bias will still allow them to see the high-quality entertainment on display. Not saying the series is perfect, as that final episode reeks of usual-Murphy problems, but it’s hard to find something that understands its tone and style this well. If you like your shows gleefully dark and utterly insane, you will get lost in this madness like a patient in the hospital.

Now, confirm another season of this show so I can fully love what should be chapter one of a story and not the whole book!