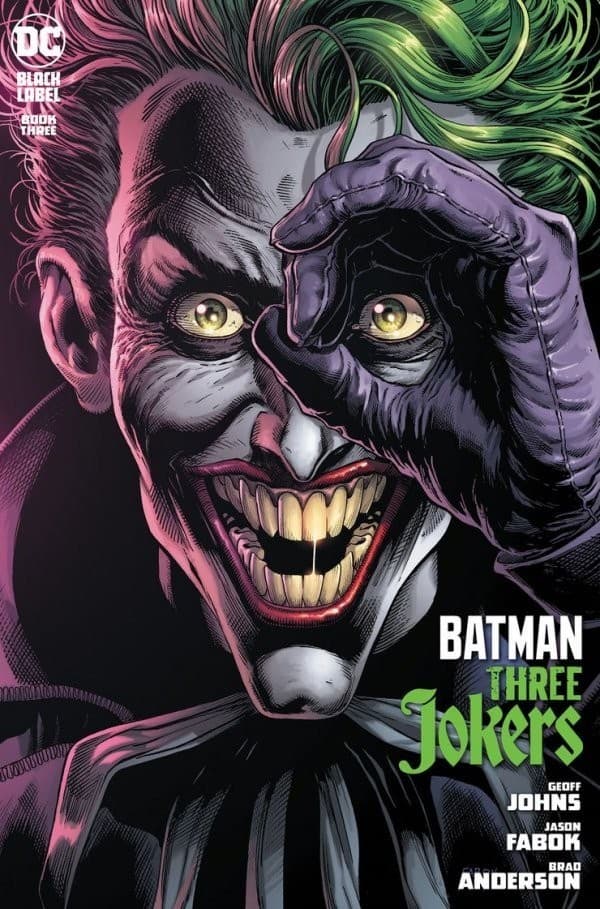 Batman and The Joker have had many clashes through their 80 year history and though this is their most recent, Batman: Three Jokers goes down as one of their most memorable and stunning conflicts with the release of the series’ third and final issue. Geoff Johns concludes his long-awaited series with style and fantastic artwork from Jason Fabok and Brad Anderson that doesn’t lose sight of the characters and their journeys. Despite the savage nature of The Joker, this issue has a pretty positive feel to it as it explores one of Batman’s most overlooked characteristics: his heart.

Whereas the first two issues focused more on Batgirl and Red Hood, Three Jokers #3 places its attention on the Dark Knight himself as he deals with The Jokers’ latest plan to create a new Joker – one that includes one of Gotham City’s most infamous subjects with personal ties to Batman. Batman remains fairly stoic for most of the issue, but the few times he becomes emotional are not only in character, but explore the depths of Batman’s empathy. One moment in particular provides him with a sense of catharsis few writers have done previously. It’s a strong scene that showcases Batman’s humanity and ability to change his perceptions, displaying how he isn’t always the hard, cold figure so many make him out to be. Three Jokers has been so much about The Joker’s evil and varying personalities that it went unnoticed until now just how much the story also explores Batman and his own trauma.

As for The Jokers, Johns again does a great job writing the villains and differentiating them in their personalities. The Criminal Joker mirrors Batman in his stoic and cold nature, being all the more frightening because of how calm and collected he is compared to his counterpart. The Comedian Joker is a much more traditional take on the Clown Prince, one who delights in his sadism toward Batman and his allies. Johns continues his deconstruction of Joker with these two versions, examining not just his violent nature but the very idea of him and his meaning to Batman. Throughout the course of the miniseries the Criminal Joker has been obsessed with creating an even better Joker, one who can plague Batman on a deeper and more personal level than either he or the other two Jokers ever could. It touches on the heart of Joker’s never-ending conflict with Batman and how, despite every act of cruelty he inflicts, he always views his actions as ‘helping’ Batman in some way. 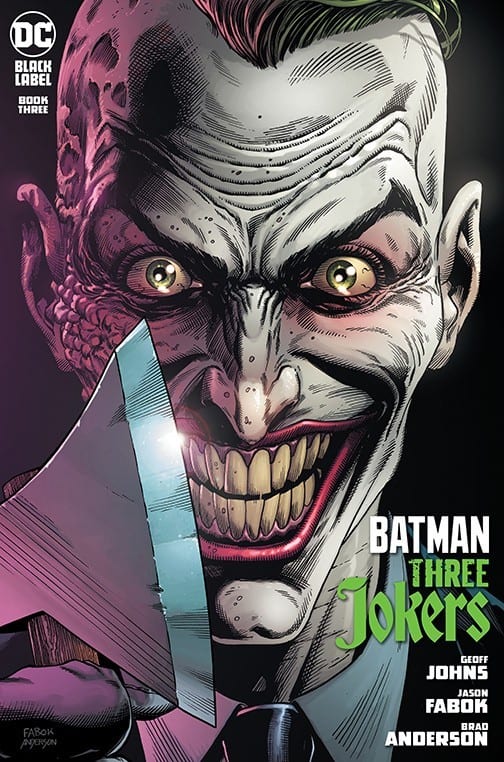 It speaks to how Three Jokers is the natural successor to Alan Moore and Brian Bolland’s The Killing Joke as the ultimate examination of these two foes. The story takes some of the elements from Moore’s classic and expands on them, especially when it comes to Joker’s past and identity. The Killing Joke references Johns puts in the final issue are few, but they get much more direct toward the issue’s conclusion as identity and legacy take a central focus on the story’s themes. Not just any potential identity of Joker, but that of Batman, Batgirl, Red Hood and even the likes of Joe Chill in who they are, what they mean to each other and the city at large. Red Hood goes through a transition of his own, one that is both cathartic and tragic for him while Batgirl grows more resolved in her fight against crime. The real trick though comes when Johns pulls the rug out with a final small twist that puts an exclamation mark on his thoughts of Batman’s humanity and Joker’s legacy while also capturing one of the central tenets to the appeal Joker has for many fans: his lack of a defining identity and how it doesn’t matter to who he is now.

As good as the story is, what makes it even better is the absolutely fantastic artwork from Jason Fabok. He’s spoken before in various interviews and comments through his social media how Three Jokers has challenged him in ways other stories haven’t, but he’s certainly more than risen to the occasion here. The Killing Joke homages don’t just end with story’s themes, but continue with the artwork as Fabok uses a similar nine-panel grid throughout the majority of the issue. The detail he puts into each image is astounding. Even a tiny image of Batman taken from a high point of view above him is intricate with the detail on his figure, not to mention the amount of work in his surroundings. His facial work really sells the emotion in the characters, especially during Batman’s big emotional scenes. From the scars on Red Hood’s face to the grooves of Batman’s glove or the differences in The Jokers’ smiles, Fabok has put in his best work yet that is complimented by Brad Anderson’s colours. He captures the gritty atmosphere of the story with his colours and blend of lights and darks to emphasize the eeriness of Joker’s presence and character. The two artists make quite the team and are in many ways the bigger selling point than Johns’ story. When Three Jokers is eventually collected in a deluxe and Absolute editions (it’s not a matter of if, but when) it will be an even better experience to pour over the details of their work.

Batman: Three Jokers had a lot riding on it due to the growing anticipation since the story was first teased and announced, especially after its many delays. Despite the lengthy wait time, it has all proved fruitful as this is an instant classic in the Batman canon. Johns’ focus on the characters and his examination of their identities and legacies speaks not only to their endurance in pop culture, but the ways in which they can adapt and grow. His interpretation of Joker (all three of them) is some of the best writing of the Clown Prince in the modern age of comics while Jason Fabok and Brad Anderson cement themselves as among the best artists in the industry. Three Jokers is recommended reading not just for die hard Batman fans, but anyone even remotely interested in the character and his long rivalry with The Joker.