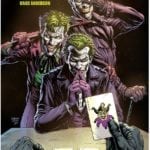 Back in April at the C2E2 convention, DC artist Jason Fabok revealed he was working on a Batman miniseries with DC superstar and former CCO Geoff Johns that would delve into the apparent mystery of the three different Jokers. Now Johns has given more information on Batman: Three Jokers, including a first look at the miniseries, […]