Oliver Stone’s Platoon is widely regarded as one of the best war films ever made and changed the face of cinema forever through its raw and honest portrayal of young American soldiers serving during the Vietnam war. 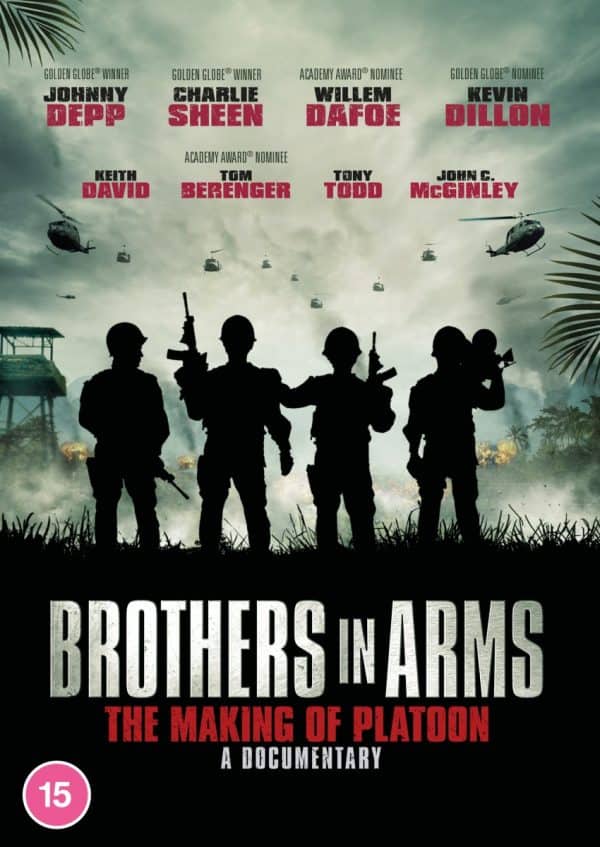 Now, Brothers in Arms: The Making of Platoon, directed by filmmaker and original Platoon actor Paul Sanchez, is the feature-length story of how this iconic, four-time Oscar winning film came to be, featuring new interviews with the original ensemble cast, many of whom would go on to become major stars.

How was your personal experience as a young man making Platoon, and playing Doc?

As both a young man, and a young actor, I simply couldn’t wait to go. Alongside all the other guys who auditioned and were chosen, we just wanted to get there. You need to remember this was a non-union movie being made in a foreign country. If any of us got injured during boot camp, we were out! Some actors weren’t happy about that, so they got fired and replaced. Oliver came over and pretty much asked us, “guys, will there be a mutiny?” and we all said “no, no, no!” [laughs] Those of us still there, the final cast, really wanted to be part of it. 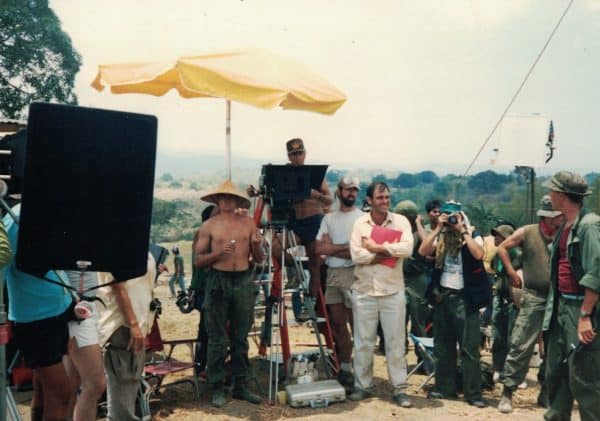 What about the training and experience of bootcamp? You talk about it a lot in the documentary.

It was brutal, the training was tough but it’s the overall exhaustion which gets you over time. The rations were another thing! During bootcamp we were given 2 MREs (meal, ready-to-eat) each day, sometimes just one if we pissed off Captain Dale Dye who ran our bootcamp [laughs]. Of course, water is the main concern on big hikes. However, mealtime was social hour so that was very special, even if you found yourself eating “bean component” MRE, what the hell is that? [laughs]

In all seriousness, it went from Hollywood bullshit, dining in restaurants, to really appreciating the chocolate chip cookie MREs and doing trades for your favourite flavours. It became the highlight of the day! A year or so back, before the pandemic, we had a party and reunion at Johnny Depp’s house, and I said I’d be in charge of the food. I brought a huge trash bag full of MREs I got from the military store. Everybody’s eyes lit up because they hadn’t seen them for so long! [laughs]

When did you decide to make a documentary about your experiences?

I wanted to give something back to the guys, my fellow actors. They’re so important and we became very close while making that film. I wanted them to know how much our shared experiences meant to me. I came up with a vague idea of doing something altogether and sent an email, wondering what they thought and if it was something they’d be interested in. They all wrote back really fast and it was all “what can I do to help?” I pushed forward from there and said, “I guess we’re doing a documentary now.”

Is it hard keeping in touch with everyone? Some of them are huge actors now!

Yeah right, just look at Willem Dafoe and Johnny Depp, to name a couple. Everyone has work commitments and families, but we try to get together when we can. We’re not all based in LA either, so if I’m ever in Canada for example, I make a point of seeing who I can there. As we say in the documentary, I hadn’t talked to some of them in years before inviting them to participate. Whenever we do catch up, it’s totally natural and we pick up where we left off. 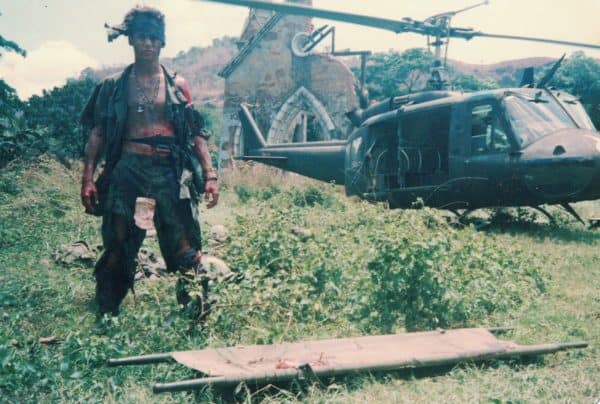 Was this your first time in the world of documentaries?

Yes, I’ve written and directed before but never made a documentary. It was a really interesting process! I’m a big fan of the format and really loved Listen to Me Marlon, about Marlon Brando. For my film, I wanted to get a good structure and tell the story well.

I decided to go chronologically and begin with a bunch of 30 guys, some had studied, some had done films, others were working odd jobs, all brought together for this opportunity to do a movie. It was about how these individual personalities came together under Oliver’s guidance, then going on the journey of how we got there and how the film was actually made.

I think it’s an interesting film for students and young actors too, because we were all the same when it came to bootcamp. Maybe some had done more movies than others, but no one was treated any different, even Willem, Tom or Johnny. When it came to the bootcamp and truly committing, we wanted to prove we could do it.

How difficult was the editing process? Did you have a crazy amount of footage?

Yes! I had a 6 hour and 40 minute cut to start with [laughs]. I could have made a limited series with just the interviews because these guys are so fascinating and tell such good stories. There’s a reason why many of them are huge stars, they’re so captivating to watch and listen to.

In the end we had to be ruthless and cut it down, so I got it to 2 hours 40 minutes and said, “I’m done!” Then I was told it had to be 90-minutes! [laughs] So I had to go back into the edit again. I did find, when you really break it down, you can afford to lose stories which might be fun, but don’t really add anything new, or cut repetitive scenes, so we got it down to the final running time, but it was hard!

As an insider, what do you think makes Platoon special?

I’m not a military veteran, but what vets tell me is that Platoon is authentic. However, you couldn’t make that film today, they’d never allow it. The bootcamp was the defining moment of how we got to where we did as actors, and with all the regulations and restrictions it wouldn’t happen now, which is a shame.

We’d be training, hiking and doing drills with very little sleep and the camera can see that reality in your eyes, and after a few days you don’t even care that the camera is there. We’d be wandering around the jungle with poisonous snakes nearby. They’d just say, “oh don’t walk this way, walk that way” [laughs]. Remember, Oliver Stone and Captain Dale Dye lived this as a reality. If you’re not interested in getting as close as possible to that reality as an actor, then why do it? 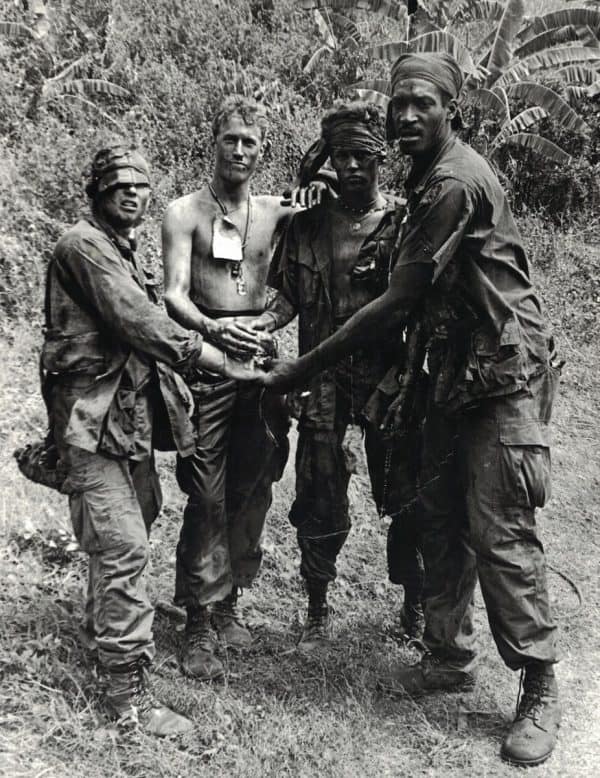 When the Oscar nominations were announced, how did it feel? (the film later won four awards)

It was absolutely surreal. When we first saw the film at a cast and crew screening, we thought we screwed up and we let down Oliver and the others. It was pretty miserable; I think we were too close to it. Ultimately, when it started getting recognition and the Oscars were announced, it was really something. Of course, in the years that followed we all came to revisit it and felt like we did “okay”, which we talk about in the documentary [laughs].

It’s Oliver’s film. I think our main job was to pay respect to the military, meaning watch, listen, learn and be authentic. Basically, we couldn’t screw it up! In my film, we never claim we know what it’s really like to be a soldier, we just had to be convincing for an audience and hopefully we managed that.

What do you hope audiences take away from your documentary, Brothers in Arms?

If you’re going to do something, anything, just commit to it. For a young actor, it takes more than a Tom Cruise smile. Bring something to the party, develop your talent. The fact that, from the young cast of Platoon, we have so many successful, big-time actors is a testament to Oliver Stone and his eye for casting.

My film is about lifelong friendship and brotherhood, whether you’re an actor, a soldier or in any other job. I refer to us as “little actor boys”. We portrayed these veterans, but I couldn’t do what they did, and we owe them a debt of gratitude. I was luckily enough to portray their bravery for a time, and I won’t forget that.

Kaleidoscope Home Entertainment presents Brothers in Arms: The Making of Platoon out now on DVD & Digital Download. Order on Amazon or iTunes.