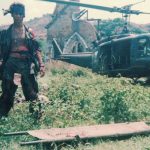 Oliver Stone’s Platoon is widely regarded as one of the best war films ever made and changed the face of cinema forever through its raw and honest portrayal of young American soldiers serving during the Vietnam war. Now, Brothers in Arms: The Making of Platoon, directed by filmmaker and original Platoon actor Paul Sanchez, is […]