new World Interactive has announced the arrival of another massive update for their hit hardcore FPS Insurgency: Sandstorm.  Operation Breakaway (1.8 patch) introduces a new co-op mode, a new map to fight over, plenty more weapons and cosmetics and much more. See more of these new features in the trailer below.  There’s also a 50% discount on Steam allowing new players to pick up Insurgency: Sandstorm for a bargain price. 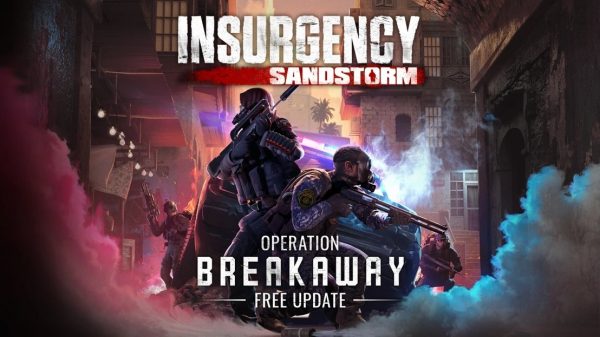 Outpost is a brand new co-op mode that has been designed with fast frantic fun in mind.  Players will start with limited equipment and will be able to gain more as they shoot their way through waves of increasingly difficult enemies.  If players get overwhelmed by the enemy they lose that objective and fall back to another one.

There’s a brand new map available to fight over, that squeezes players into a tight urban CQB and gives opportunities for fast paced close quarters action.  This map allows for great use of the new underbarrel shotgun while also providing flanking routes for more tactical players.

There’s an abundance of new weapons and attachments arriving with this update with Security gaining low recoil AUG A3 assault rifle and Insurgents getting the high fire rate FAMAS F1.  Weapon customisation has also been expanded with six new weapon upgrades including new underbarrel shotguns and foregrips.

There’s also a stack of new cosmetics matching the update’s rogue security theme.  There are free outfits for each side, including rogue cop uniforms for Insurgents and internal affairs officers for Security.

As well as the update, a Breakaway-themed bundle is out now and includes four paid DLC packs (also available to purchase separately).

Operation: Breakaway is available now for Insurgency: Sandstorm.  Gamers can purchase the game on Steam with a 50% discount until 12th October.