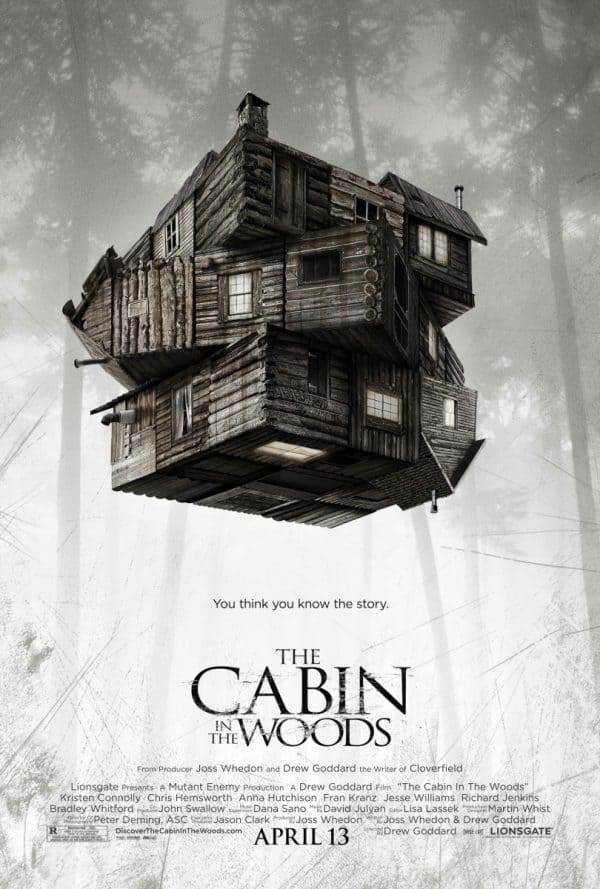 A group of friends embark upon a getaway to an isolated cabin in the woods, where they forced to fight for their lives against a group of undead murderers. Yet things are not quite as they appear. 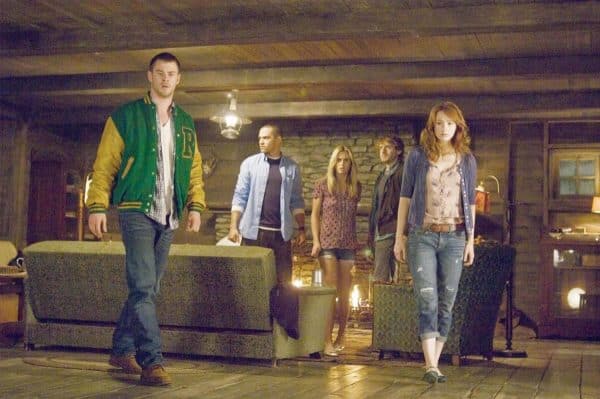 Happy Halloween Everyone! We’ve reached the end of another year of October Horrors and its been quite a month. We’ve looked at vampires, zombies, mad scientists, evil ventriloquists dummies, cave monsters, serial killers, cannibals, headless horsemen, Neo-Nazis, H.P. Lovecraft and a double dose of Ingmar Bergman to name but a few. Alas, we’ve reached our final review of the month and to mark the occasion let’s have something fun to send us off; Drew Goddard’s love letter to the horror genre that is The Cabin the Woods.

The plot is very much your typical “friends go to the woods, bad shit happens” horror plot with all the cliched boxes ticked. The character tropes are all present, the alpha male “Bro”, the shy nerd, the “dumb” blonde, the pothead and the virginal innocent girl who will most likely survive. It’s all cliched and familiar. And that’s the point. The Cabin in the Woods, much like Scream, is a celebration of the horror genre and an affectionate send-up its familiar stories and cliches.

The script by Goddard and Joss Whedon is intelligent in how it mixes the clichés together while also still making them work within the context of the world created for the film. Presenting them from the start as all part of a deliberate and elaborate scheme run by hidden forces. For instance, the creepy backwoods hill-billy petrol station owner is actually an agent, albeit one who takes his job way too seriously, speaking to his colleagues almost as if he’s delivering a sacrificial sermon, much to their mockery. 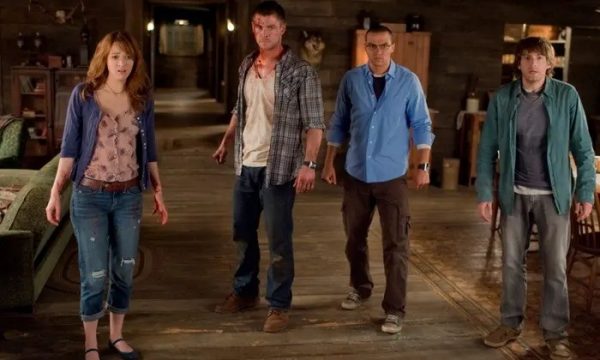 The part I really love though is that the amount of teasing this film does. Littered throughout are just these little hints about the larger world of this film. Such as screens showing us glimpses other “cabins” (as I refer to them) around the world playing out their own horror scenarios, complete with their own cliches. For instance, we see a Japanese “cabin” in which school girls are menaced by a long-haired ghost in white straight out of The Ring. Although I’m more interested in the “cabins” that failed, especially Madrid with its exploding castle. Who was in that one? Chuck Norris?. The biggest tease is how our heroes “choose” their manner of death with the basement of the titular cabin littered with all kinds of cursed objects that could result in bloody death. It’s all fun stuff that is catnip to a horror nerd like myself, and it just makes you wish we could have a longer peek behind the curtain.

While it is littered with nods, winks and a few nudges to horror films of old, it all would worthless if the film itself didn’t work. Thankfully, The Cabin in the Woods, in addition to being a love letter, is also an immensely funny and entertaining horror film all on its own. Filled with likeable characters, plenty of great scares and a knowing sense of humour that adds some welcome brevity to the increasingly violent sights on screen.

The cast is on point, with our leads (including the God of Thunder himself Chris Hemsworth) playing their deliberately cliched characters to perfection. Fran Kranz’s Marty, a man whose blood probably consists entirely of pot smoke, is a standout. The actor, channelling his inner Shaggy in manner and speech, as his increasingly nervous demeanour and voice suggesting that he’s mere seconds away from screaming ‘ZOINKS’. Also, how can you not love a man who has a bong that doubles as a cup and a club? That’s just cool.

My favourite characters though are Richard Jenkins and Bradley Whitford’s puppet masters lurking below the Cabin and carefully controlling the events above, the pair having excellent chemistry and comedic timing. Playing their roles less as two evil masterminds, but as a couple of office workers just doing a job that needs to get done, letting off steam by placing bets on what kind of monsters will be summoned or screaming ‘Fuck you’ at some Japanese school children.

The pacing is perfect, moving along at a rapid pace that lets you enjoy the various jokes and horrific moments just long enough to stop them outstaying their welcome. The set pieces are also terrific, growing ever more elaborate before the film culminates in a climax that is the stuff of a horror fans dreams. It’s a climax that is so wonderful and frankly ridiculous that I don’t want to spoil it for those who still haven’t seen it. So, I implore you, please watch it.

A smart script that pays homage to horrors past, perfect pacing and a finale to die for, make The Cabin in the Woods, without question, one of the most entertaining and fun horror films of the last decade, one of my favourites and the perfect finale to your Halloween viewing party. Check it out. NOW! 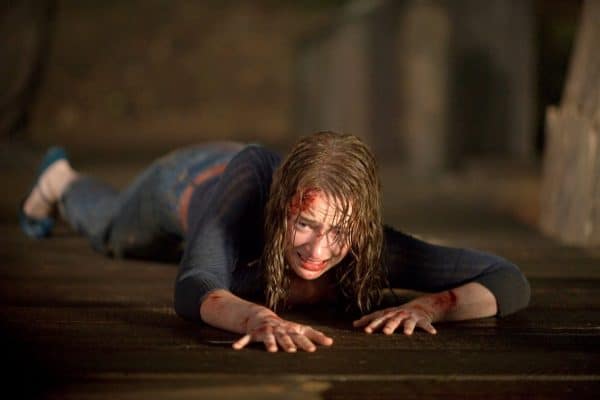 Thank you all for joining me for another year of horror reviews, I hope you’ve enjoyed them. However, if I may be serious just for a moment. I know this year has not been a good one for any of us, but, I do hope that my silly reviews will have, at the very least, provided some kind of comfort or just a helpful small distraction those of you who are perhaps struggling. These reviews have been immensely therapeutic for me too, and I do appreciate you all for reading them, whether you read all 31 of them or if this one is the only review you check out.

So, once again thank you all for reading, and I do hope that you’ll join me next year. Unless my Flickering overlords have come to their senses and fired me. Till then, I wish you all, especially this year, a very safe and Happy Halloween.

If you have any suggestions for future October Horrors or just want to let me know your own feelings about the films I’ve covered do feel free to let us know on Twitter at @flickeringmyth and Graeme Robertson @robertsong93. Thanks.