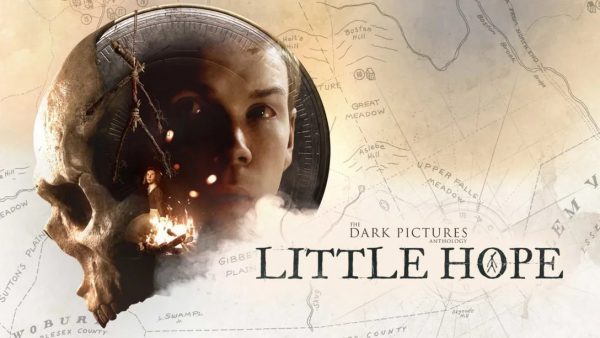 What better time than Halloween in the middle of a global pandemic for Supermassive Games to release the second entry into their Until Dawn spin-off anthology project, The Dark Pictures?

Though Little Hope offers up a more intriguing narrative than the lackluster prior effort Man of Medan, it ultimately falls prey to most of the same complaints, clinging too eagerly to played-out genre tropes while failing to offer much in the way of compelling gameplay. If you can tap into its undemanding vibe of kitschy horror, there are fleeting pleasures to be had, though certainly not enough to justify its £24.99 launch price.

Little Hope kicks off with a bus crash which leaves students Taylor (Caitlyn Sponheimer), Andrew (Will Poulter), Daniel (Kyle Bailey), Angela (Ellen David), and their professor John (Alex Ivanovici) stranded in the fog-soaked New England town of Little Hope. As the group attempts to get to safety, they find themselves facing off against the ghosts of Little Hope’s past, given the town’s history of witch hunts in the late 17th century.

Much like Supermassive’s prior cinematic horror joints, Little Hope is largely presented as a familiar grab bag of genre hooey, and while Until Dawn had the nous to serve as a knowing homage, Little Hope unfortunately makes the same primary mistake as Man of Medan, by regurgitating these hackneyed elements without sufficient self-awareness.

Like the previous Dark Pictures title, it never seems quite sure of what it wants to be tonally, investing so deeply in tired genre hokum and taking itself oddly seriously in the process, even with the occasional interjections of knowingly cornball dialogue (“A crash wasn’t on the curriculum.”)

Rather, the story mostly unfolds through reams of expository dialogue, while what passes for frights here generally resolves to metronomically predictable jump scares. Though the central, Salem-adjacent town seems like fertile ground for a spooky ghost story, the narrative trajectory proves decidedly less so, with the story’s major conceit being one so hilariously obvious I both called it in the opening scene and assumed for the rest of the game that I was being duped. As it turned out, I wasn’t.

It’s an underwhelming, derivative through-line for a game which had the potential to intermingle past and present in an arresting way, and it doesn’t help at all that most of the central characters are relatively forgettable, no matter the solid efforts of the ensemble cast.

Gameplay-wise, things are typically constrained per the “walking simulator” formula of the two prior games, which while not inherently a bad thing, most often amounts to ambling down narrow paths and gravitating towards shiny objects until you find the right one to trigger the next cinematic. QTE sequences are back, of course, though generally too generous to be even slightly challenging – except for the occasional cheap time window in the late-game which can screw up a pivotal moment and potentially kill one of your characters.

Much of the game is hinged on the choices characters make, which can lead to a number of variable outcomes, though mileage is likely to vary on how compelled players are to return for a second or third go-around, especially with how staid the plot and gameplay are. Furthermore, the sometimes frustrating vagueness of the choices presented occasionally resulted in me accidentally selecting an undesirable outcome, a suspicious flourish which may be intended to encourage subsequent play-throughs.

Added value abounds elsewhere with alternate paths, collectible gumph, and premonition pictures littered around the town, but again, the core experience is so thoroughly passable that many may simply choose to view it as a four-hour one-off.

Yes, half-sensibly, half-frustratingly, Little Hope is basically the length of two movies, which for a £24.99 price tag does seem a tad on the expensive side, especially when you consider how much of that time is comprised of obvious padding, such as forced slow-walking and cryptic interstitial cutaways to the meta-storyteller known as the “Curator.”

As such, if you waited for the inevitable Game Pass drop next year, nobody could blame you. But if you’ve got a willing friend, the experience becomes far more of a hoot thanks to the smartly in-built multiplayer options, both online with a single pal or offline in pass-the-controller style with up to five.

But even when played in the most ideal conditions, it’s tough to deny that the titular location just isn’t very interesting, and anyone hoping they’ll get to explore an expansive podunk town ala Silent Hill is likely to be left hugely underwhelmed by what’s on offer here.

Though not quite as drab as the metallic ghost ship setting of Man of Medan, it’s not far off. Given that you spend a massive chunk of the game walking down winding, foggy roads, it’s almost enough to make one suspect this was done for either budgetary or performance reasons, much like how the original Silent Hill used fog to disguise its poor draw distance.

The visuals we do get are first-rate, at least; the interactive “cutscenes” are presented in a canny cinematic style with terrific lighting and camerawork, while retaining a high faithfulness to the likenessness of the actors who carried out performance capture, especially the most recognisable cast member, Will Poulter. It’s a shame so much of the game is awash in a dull pall, though, because like the previous game the performance is leagues ahead of Until Dawn, which struggled to maintain even 30 fps on a base PS4. Bar the occasional hitch during scene transitions, this game runs as smooth as butter.

The aural package also kicks ass; the moment-to-moment sound design is sharp, especially the subtle cracking of twigs in the forest which evokes The Blair Witch Project, and the simple, ominous creaking of floorboards as you walk around. As per the previous games, the performances from the cast are also uniformly solid, especially Poulter as protagonist Andrew.

Between this and his work on Black Mirror: Bandersnatch, it’s clear Poulter harbours an interest in media projects which blur the line between games and movies, so it’s just a bit of a shame he isn’t offered more to chew on here. The easy MVP in the sound department, however, is composer Jason Graves, whose nerve-jangling score gamely attempts to wring ever last morsel of terror out of the fairly ho-hum story.

Supermassive also deserves credit for Little Hope’s fair suite of accessibility features; there’s an option to disable QTEs altogether, as well as the ability to enable single-action prompts, change the subtitle size and colour, and so on. Though Naughty Dog’s The Last of Us Part II remains the gold standard for comprehensive accessibility options, it’s still hugely encouraging to see even “small,” lower-budget titles such as this offering these options.

All in all, the biggest issue with Little Hope is that it doesn’t really function particularly well as a horror experience that gets under the skin, filled with tepid, predictable jump scares and been-there-done-that plotting, ensuring what periodic atmosphere it generates is largely sucked out by the time that laughable final reveal drops.

The game comes complete with a tease for the next title, tentatively dated for next year, and though my disappointment with both Dark Pictures games to date is palpable, I still find myself intrigued to see what Supermassive dishes up next – albeit not too hopeful it’ll be a tectonic improvement.

Cons:
– Gameplay is rather dull.
– Unremarkable environments.
– Short play-time for the price.
– Story twists and turns are mostly predictable.

Reviewed on PS4 (also available on PC and Xbox One).