Hasitha Fernando revisits Batman Beyond: Return of the Joker twenty years after its release… 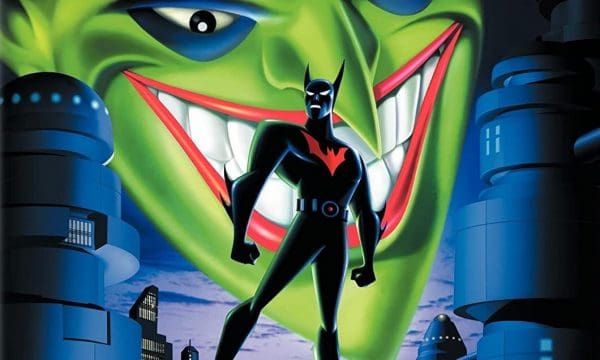 Throughout the 1990’s DC Comics and Warner Bros. Entertainment found great success with their ever-expanding slate of animated TV series. Kicking-off with the critically acclaimed Batman: The Animated Series in the Fall of 1992, this fledgling animated universe further grew with the introduction of a TV series dedicated to DC’s flagship character Superman in 1996 which was followed by the Justice League animated series five years later. Yet, while this animated universe continued to exponentially grow and showcase a wide array of characters, Batman’s place in it was never forgotten. To many, the brooding Dark Knight was in a lot of ways, the beating heart of the proceedings. In the aftermath of The New Batman Adventures’ conclusion the team of Paul Dini and Bruce Timm were looking at new ways to rework the Caped Crusader’s mythos for the small screen. However, the path that they eventually took, with Batman Beyond, was an unusual one.

Eschewing a more traditional approach the creative team of Dini and Timm made a decision from the get-go to downplay their successful erstwhile series’ established lore and make Batman Beyond succeed on its own terms. Set some forty years into the future Batman Beyond followed the adventures of a hot-headed young hero named Terry McGinnis, who has now taken on the Batman’s mantle. The inexperienced McGinnis is ably assisted by a wizened Bruce Wayne, who is now acting as the new Batman’s mentor. This futuristic sequel series lasted three seasons, running from January 10th 1999 to December 18th 2001 and saw our titular hero face off against a new rogues’ gallery as well as taking on a number of classic villains from the original series. Before going further, it must be mentioned here that a few years prior to Batman Beyond’s debut, Warner Bros. Animation had already commenced expanding their portfolio of feature films with the release of Batman: Mask of the Phantasm and Batman & Mr. Freeze: Subzero respectively. Following the success of the aforementioned films, animation whiz Boyd Kirkland was hired to write and direct a third direct-to-video installment titled Batman: Arkham but this idea was later nixed by studio execs in favor of a feature film set in the futuristic world of Batman Beyond. 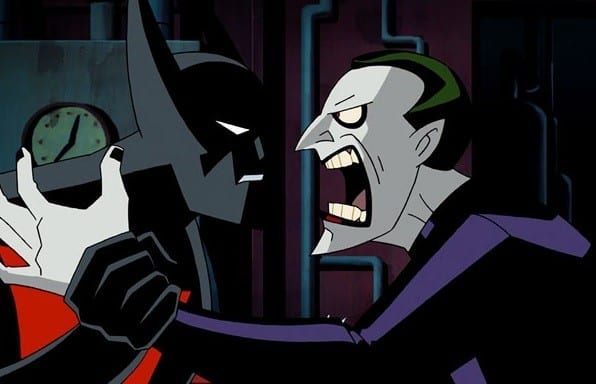 The creative team of Dini and Timm decided quite early on in the production process that in order for this effort to work they’d have to bring back Batman’s arch-enemy Joker. From a narrative stand point this made a lot of sense because it would have Terry McGinnis’ Caped Crusader put to the ultimate test as he went up against Batman’s nemesis, proving with utter certainty that he is indeed a worthy successor to Bruce Wayne. Produced during the second and third season of Batman Beyond, the film was eventually aired as part of the series’ third season, though ‘when’ the story actually takes place is a bit difficult to gauge. Some say the incident’s in the film transpire after the episodes “King’s Ransom” and “The Untouchables” while others contend that it takes place after the show’s series finale “Unmasked”.

The Joker’s design underwent a major revamp for the film, with the more cartoony trappings featured in The New Batman Adventures given the proverbial boot. In its place a more physically intimidating, minimalistic look inspired by an illustration of Hannibal Lecter from the novel Silence of the Lambs was utilized. This design was reused when the iconic character made subsequent ‘guest’ appearances in the Justice League and Static Shock TV series later on. Several nods to the original series were made with the character designs made for the Jokerz gang with the character of Woof created as a tribute to Bud and Lou, the pet hyenas of the Joker and Ghoul’s look based loosely on that of the Scarecrow. Harley Quinn, Joker’s mercurial sidekick, was originally set to be killed-off in one of the film’s early drafts but Dini and Timm eventually decided against this notion, since the character had by that time already become a staple of the Batman mythos. 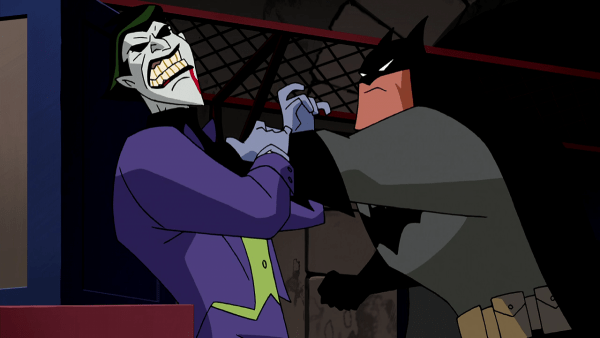 This amazing project was further bolstered by the return of the main voice acting cast of the TV series, with both Kevin Conroy and Mark Hamill returning to reprise their roles as Batman and the Joker respectively. At that point in time the actors have reached such a level of popularity that to even imagine anyone else voicing the iconic characters was akin to blasphemy. Hamill additionally voiced the smooth operating businessman Jordan Pryce, a red-herring character in the film, to deceive the audience about the new Joker’s real identity. Smallville alum Michael Rosenbaum who was notable for his vocal impressions of other celebrities was cast as Ghoul. Rosenbaum’s performance was good enough to convince producers to recast the Barry Allen/The Flash character for the upcoming Justice League TV show replacing Charlie Schlatter. Academy Award nominee Dean Stockwell was hired to bring to life the adult Tim Drake while the uber talented Tara Strong-current voice of Harley Quinn- lent her vocal talents as Barbara Gordon/Batgirl.

Overall, the Batman Beyond TV series have always been a fascinating addition to the Batman lore, but Return of the Joker took the show’s concepts and characters and elevated them to such a dizzyingly high level that even 20 years later it still stands tall as one of the best offerings from the DCAU. The film also featured the darkest story arc yet, pertaining to the Clown Prince of Crime with some of the flashback sequences of Joker torturing a young Tim Drake being truly unsettling. One of few animated film narratives to explore the true extent of Joker’s twisted villainy, the story further examines the trauma Bruce Wayne’s has endured at the hands of this murdering lunatic. Thus, unsurprisingly Return of the Joker eventually got slapped with a PG-13 rating from the MPAA for violence, the first animated Batman film to receive such. The movie was further re-edited shortly before its release on December 12th, 2000 to reduce its violence, due to the backlash against violence in films and video games following the Columbine High School massacre. However, the original uncut version was subsequently released on April 23rd, 2002 following an online petition signed by fans. 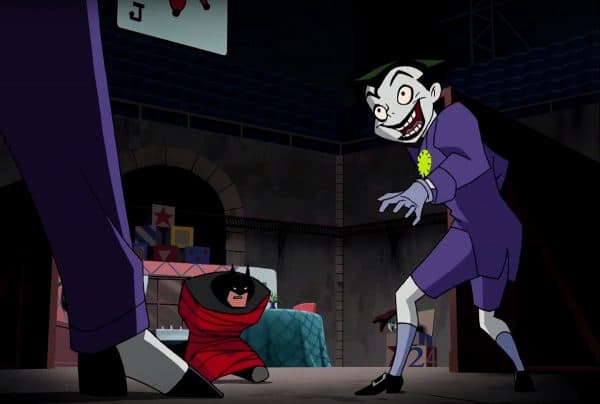 As far as the voice acting performances are concerned both Conroy and Hamill bring their A-game to the proceedings, each dishing out some of their career best. But it’s Hamill’s work here that is exemplary, pushing his vocal skills to previously unexplored dark territories, which in turn resulted in a chillingly disturbing performance. This is Hamill unrestrained and unchained, channelling the iconic supervillain in all his depraved glory, and boy is it an absolute delight or what! Conroy complements Hamill’s manic performance with a more restrained and sombre take on his character, beautifully embodying the internal trauma and conflict of the role. Like a wounded ex-prize fighter Bruce realizes that he’s out of his depth this time around when going up against his nemesis. Bruce knows deep down he needs his protégé’s help if he is to succeed and Terry McGinnis is perfectly brought to life by the excellent voice acting performance of Will Friedle. The animation showcased here is also top-notch, with some exciting action set pieces and character work translating the well written script to the screen. Composer Kristopher Carter applies the edgy gothic-rock sound crafted by him for the Batman Beyond TV show to the feature film, thereby maintaining a tonal continuity of sorts from a musical aspect.

To say that Batman Beyond: Return of the Joker is one of the DCAU’s more bold entries, is a bit of an understatement. Produced during the proverbial Golden Age of DC animation the film continues to stand the test of time 20 years later, as one of the studio’s fiercely original efforts that took beloved comic book characters in strange and exciting new directions whilst offering great entertainment value.