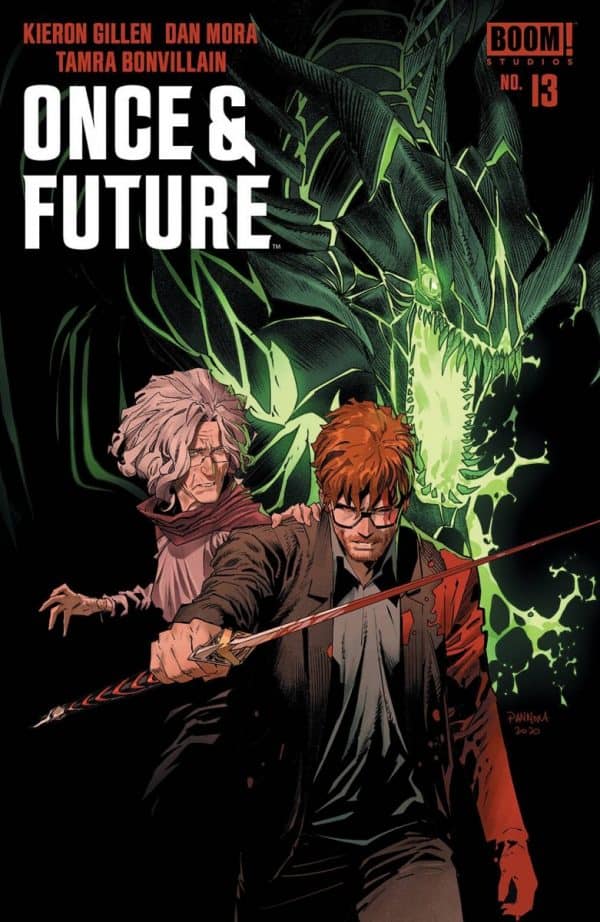 A new arc begins in this modern medieval hybrid, where gun toting grannies go toe to toe with Beowulf, Grendel and many other creatures from mythology and folklore. The adventures of Duncan, his Gran and Rose are back onto the path of investigation rather then being the victims of the series’ second arc.

The story opens with Bridgette resting with a cigarette in hand, taking in the evening air and relaxing. Interrupted by a parliament of magpies (yes that is a correct term), the gathering of birds brings Bridgette to quickly start reciting the old nursery rhyme, and then an alternative version. Only then to be brought to the end of her very short tether, she unloads a few rounds from a handgun and whittles the numbers down to a size that is more favourable.

The opening scene certainly brings back some of the charm I personally felt was missing from the last couple of issues. The way in which these characters were allowed to be eccentric and yet vastly logical at the same time. The charm laid with Bridgette as the master and Duncan clambering out of his depth; we have never moved fully away from this dynamic, but this new issue certainly feels like a return to the first arc.

Some of the questions from issue #1 have been raised and are now being investigated, and the radical Nazi group that was responsible for the resurrection of Arthur in the first place have become relevant to the story. The investigation leads them down a path that has many routes, and it makes for an interesting read, one where I am genuinely excited to see where we are taken in the next issue.

The artwork once again is beautiful in this series, and the vibrant colours of the sky even in the opening panels show the care and attention to detail you might easily overlook when taking in the story. The wonderful touches of green smoke to highlight a connection to the spiritual plane, which emphasises the interference of Arthur or Merlin is abundantly clear, while being creepy and delicate.

Once & Future continues to be one of my favourite current series, where the artwork is bold and beautiful. The second arc might have been a bit dull in my opinion, but the art has never faltered and I enjoy the care and attention in the details of the images as much as the story.