Ricky Church reviews the second episode of The Mandalorian season 2…

This week’s episode of The Mandalorian was both a fun misadventure and tense fight for survival as Din Djarin came across yet another dangerous space creature – or this case creatures. The mix of comedy and tension worked well as Din took on a slightly unusual but seemingly easy job that quickly spiralled out of his control. Peyton Reed’s direction was focused on the story with some gorgeous visuals that not only included the creepy creatures, but some very nice X-Wing action.

The light-hearted elements worked well throughout the episode. Though Amy Sedaris appeared briefly in ‘The Passenger’, she utilized every moment of screentime to great effect with some well-timed lines that helped differentiate her further from many of the other supporting characters that have helped Din. Other moments, such as Din’s difficulty understanding Frog Lady’s language or The Child’s appetite for the frog eggs, brought a good amount of levity to such an unusual job. It was made better by the episode’s connection to season one’s ‘The Prisoner’ when Din’s brief run in with the New Republic came back to bite him.

One of the best aspects to ‘The Passenger’ was the visual effects with the Razorcrest and the X-Wing’s chase through snowy skies and landscapes being one of the standout sequences of the whole series thus far. As a sucker for X-Wings, it was great to see how well done the chase was both in suspense and visuals as the classic Rebel ships looked, sounded and moved just as good as they do in the big screen Star Wars films. It was also a nice touch to have Mandalorian executive producer and Clone Wars/Rebels creator Dave Filoni cameo again as the X-Wing pilot Wolf, though it was also a complete surprise to see Canadian actor Paul Sun-Hyung Lee of Kim’s Convenience to cameo as the pilot Carson and interact the most with Din.

Despite the amount of levity in the episode, things took quite a serious turn in the climax as The Child unknowingly woke up what looked like the Krykna spider-like creatures from Star Wars Rebels. Their jump to live action was pretty impressive and made them even creepier than they were in the animated series. Again the visual effects really stood out in how the creatures moved and the level of detail in their surfaces. The Frog Lady also looked quite good with its seemingly practical make-up and mask. 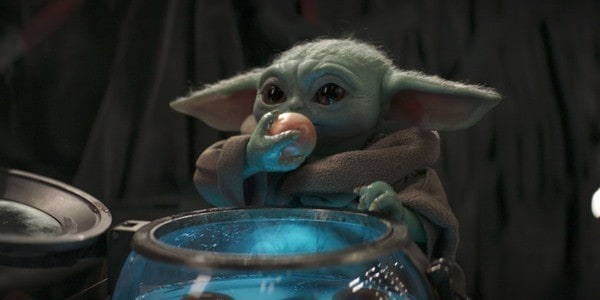 While not advancing the main story a whole lot, ‘The Passenger’ was still a fun adventure for Din Djarin and The Child. Of note is how The Child is gaining a bit more of a personality with his side looks and mischievous behaviour. The visuals were stunning all around and Reed’s balance of comedy and tension was nicely done, making this another memorable chapter of The Mandalorian.