Assemble Entertainment and developer Gentlymad Studios have released the ninth major update for their award winning post-apocalyptic city builder Endzone – A World Apart.  The Livestock update, as its name suggests, introduces lots of new animals that can be used as livestock on farms.  There’s also been the addition of other new features to help survivors make best use of these animals.  A brand new trailer has been released showing more of what to expect in this latest update, and we have it for you below… 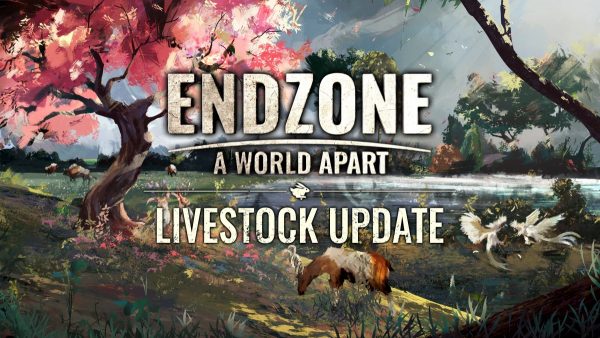 A variety of new animals have made their way into the Endzone and these are a more welcome sight than the usual creatures normally found there.  Alongside the wild boar and the deer that usually inhabit the area players will begin to see rabbits, goats, chickens and even buffalo.  These new creatures will help provide more variation to survivors in terms of activities and diet but they will need to be captured first.  Fortunately, the new livestock animals can be hunted and captured using the Hunting Lodge and then kept within the update’s other new addition, the Farm Pasture.

In addition, the game’s tutorial has been expanded to include a detailed walkthrough on how to catch, tame and farm livestock.

Finally, there is the introduction of a Food Counter to provide food for settlers, which means less walking distance to acquire necessary nourishment.

If you want to see more of this update for Endzone – A World Apart then join the game’s lead developer Kai Mergener during his stream today at 3pm on the official Assemble Entertainment Twitch channel.