Ricky Church reviews the third episode of The Expanse season 5…

The Expanse‘s return started off in an interesting way with Amazon putting out the first three episodes of the season at once, acting as almost a three-part premiere that has been strongly character focused as the crew of the Rocinante have gone their separate ways on their own journeys for the time being. While the third episode, ‘Mother’ directed by former Expanse star Thomas Jane, is still character driven, its story features more of the main plot of the season and ends on a gigantic cliffhanger the series has been building toward ever since the fourth season finale. For something built up for that long, the immediate payoff succeeds in creating suspense and dread. 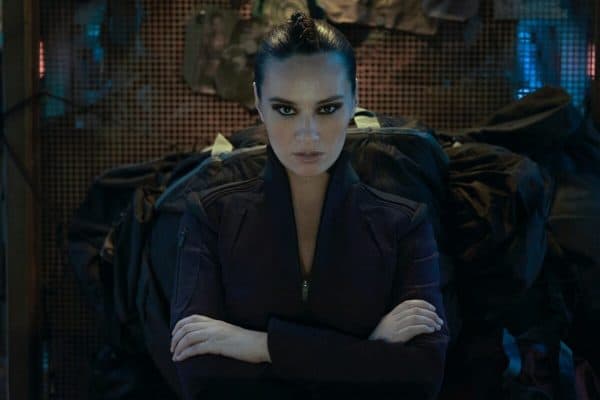 The previous episodes weren’t absent of the political intrigue through the various factions featured in the series, but ‘Mother’ featured the most political talk thus far as Avasarala dealt with the inner workings of her government and her secret investigation while Drummer thought to settle her grief through revenge but had to think about how the crosshairs it would put on herself and her crew from many other Belters by doing so. The story took on a new complexity as the gravity of their situations fully hit them. For Avasarala, there was nothing else she could do as the new administration was sidelining her and purposefully backing her into a corner while Drummer interestingly took a higher road for the sake of her crew.

To expand a bit more on Drummer it was nice to see her given more of a presence, especially since her only scene in the previous episode was the cold open and how it established she was becoming a pirate with a growing reputation. Cara Gee gave one of her best performances as Drummer as she displayed how hard yet broken she had become since the conclusion of season four. The range Gee showed as she balanced Drummer’s newfound coldness and both her grief and guilt over Ashford’s murder was impressive, making the sympathy viewers would likely feel toward her earned as she took the moral highground by foregoing her thirst for vengeance in order to protect her crew and move on – though it likely won’t be long before Drummer feels the need to take up vengeance again and shed some blood.

The other person to benefit from the episode was Naomi as she finally reunited with her son. Dominique Tipper displayed a lot of vulnerability as she met Filip, played by Jasai Chase Owens, as she tried convincing him to leave his father for a safer place in the system. It was quite a strong scene as it began with the pair wordlessly looking over each other, unsure who would speak first or if they’d even speak at all, and grew into a volatile confrontation. It was also significant because this was really the first time Owens got to flex his acting muscles as Filip after briefly appearing in a couple previous episodes and mostly standing around in an intimidating manner or carrying out Marco’s orders. He and Tipper already share great chemistry with each other and it will be interesting to see where their relationship goes from here now.

The story moved in some other intriguing directions as Holden, Fred and Bull attempted to find the people responsible for Monica’s kidnapping and near death while Bobby and Alex rattled some cages a bit too quickly for their liking. Lara Jean Chorostecki was a nice addition to the episode and was to watch as she and Alex both played with each other, flattering the other enough for whatever pieces of information they could gather – though Alex was perhaps a bit too forthcoming regarding his knowledge of the protomolecule. Combined with the stories from the other characters, everything is moving in a nice direction with the interest and stakes steadily rising. And just when you think the episode might end on a quieter character moment, it instead ends on one of the biggest cliffhangers The Expanse has dropped as Marco’s plan comes to fruition, promising nothing will be the same in this series again.

‘Mother’ was a very well structured episode of The Expanse as it devoted a bit more time to the main storyline of the season without losing sight of the important character beats. Jane’s direction is solid as he balanced the plot and characters well, pushing both forward into interesting new places. Tipper and Owens made an instant connection while Aghdashloo and Gee explored more of their characters personal powerlessness. With the episode’s shocking ending, The Expanse’s fifth season has truly kicked off.