During December’s Disney Investor Day, the Mouse House announced that an entirely new adult-orientated programming brand/content section is coming to Disney+ with Star on Disney+, and now we have the official launch line up of programming which includes over 75 TV series and 270 movies, along with four exclusive Star Originals.

As for the library content, look forward to the likes of Grey’s Anatomy, 24, Buffy The Vampire Slayer, The X-Files, Lost, Family Guy, American Dad, Atlanta and black-ish as well as classic movies such as Pretty Woman, Die Hard 2, The Devil Wears Prada and Moulin Rouge to more recent releases including Deadpool 2, The Favourite, Three Billboards Outside Ebbing, Missouri and The Grand Budapest Hotel. See the launch line-up for yourself here… 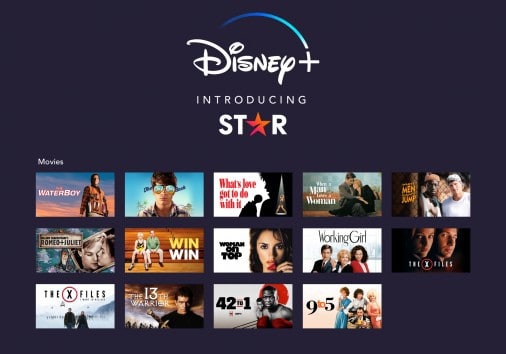 “Star will be an integral part of Disney+, making it bigger, bolder and even more exciting,” states Jan Koeppen, President of The Walt Disney Company EMEA. “The arrival of hundreds of TV series and movies including our exclusive Star Originals will make Disney+ the premier destination for high quality entertainment with something for everyone. Needless to say, all this comes with parental controls to give parents that peace of mind.”

Star on Disney+ will launch in the UK, Ireland, France, Germany Italy, Spain, Austria, Switzerland, Portugal, Belgium, Luxembourg, The Netherlands, Norway, Sweden, Denmark, Finland, Iceland, Australia, New Zealand, and Canada on February 23rd, and will bring with it a price rise from £5.99 per month to £7.99.