Aaron Haye has been in visual effects for over twenty years, worked as a model maker for ILM and been involved creatively on everything from the Star Wars prequels to J.J. Abrams Star Trek. His work as a production designer can be seen on Bohemian Rhapsody, the underrated Charlie’s Angels reboot of 2019 as well as The Stand for CBS. In conversation he is impassioned, considered and eloquent about his process and what makes each project unique for him. He recently took time out to talk to Martin Carr about his move into long form entertainment and what makes this particular Stephen King adaptation so special. 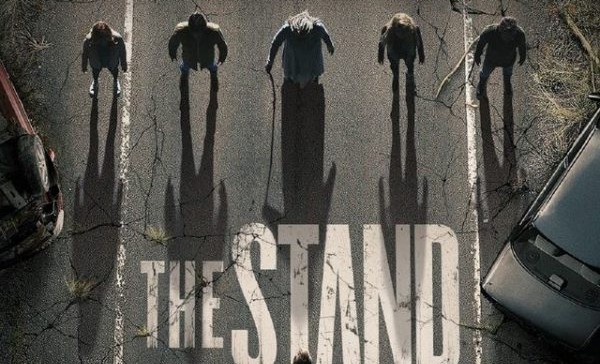 What did the initial conversations with Josh Boone focus on prior to starting work on The Stand?

Initial conversations were with Josh Boone, Ben Cavell and Will Weiske the producer, which was quite some time ago, early in January of 2019. Then later Jake Braver was involved and it all focused on trying to build a world that was as believable as possible. Josh is a Stephen King nerd and he really wanted to be as faithful as possible, take licence where necessary, but try to create a world that allowed these actors to fully inhabit the characters.

Considering the complexity of this source material, what proved to be the most challenging asking of building this world?

Firstly, there is the sheer scope, which meant replicating the look of about a dozen US states. Heading up to Boulder then over to Vegas all on foot and establishing all that variety, in terms of terrain and landscape. From Maine to California then through to Texas and everything in between. In the big picture that was the biggest challenge, while there were specific sets and locations which presented their own set of obstacles. When we started, they were considering doing half the production in Canada and half in the US, as a way to achieve more diversity in terms of look. However, that turned out to unfeasible, so we were almost entirely in Canada and British Columbia, meaning we shot all over the province and got as much as possible. On top of that, there was also some additional shooting in Nevada to really round out the Vegas desert looks.

How did you go about grounding the world and making it feel as believable as possible?

Stephen King likes the world to be nothing special, so if we could we would have shot this inside a Walmart. That is essentially what we were trying to do in those big box stories, by trying to make audiences feel like they were in everyday America. We wanted some big scale and some beautiful backgrounds in there, but were ultimately trying to find beauty in the prosaic. I was inspired by Gregory Krewdson photographs which featured people in strangely surreal isolated landscapes. It was something we talked to all the actors about as well when we were getting into this. The idea that you have lost everything you’ve ever known, and you are all alone in this space. Those first moments at the beginning of this story are meant to be so lonely. 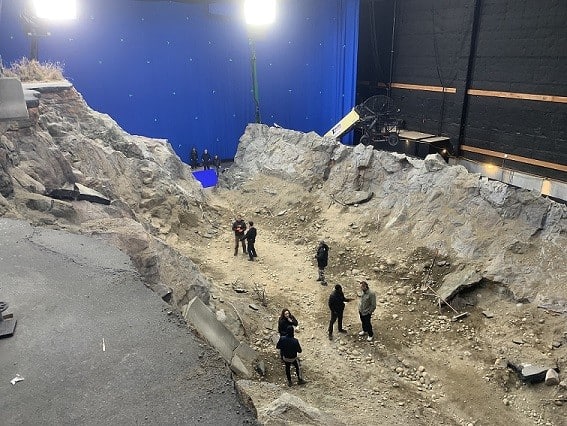 Considering the sheer number of characters, how do you think production design helped establish distinctive identities?

It was fun creating a little bit of Texas for Stu Redman because his confinement was so particular. He gets to be in those quarantine spaces, which is the only connection we have to the world which managed this virus. In those initial days with the second confinement for Stu where he and Doctor Ellis are holed up, it was something I pitched to Ben as being the place they sent Vice President Dick Chaney which ended up in the script. It was meant to be an underground bunker and that being the case this is just a hole in the ground, let’s put a window in. Then it became about giving the occupants a sense of the world above through that window. In the end, we used it as a tool to get us into the dreams of Mother Abagail, when Stu actually crawls through the projection into that space. Whereas Ogunquit for Harold and Frannie was supposed to feel like any American town in order to really ground them.

With Larry we got to have some fun in his journey through New York and it was particularly exciting building the dressing room. I know it was only a small little scene where he is doing drugs whilst on his phone, but we built it to feel like a million people had been there before. You can see all the details in terms of bands who have been there just scribbled into the wall. Those are the sort of details I love to put in which most people never notice, but I guarantee there are lots of little Stephen King Easter eggs scratched into the plaster.

New Vegas feels like an extension of Randall Flagg’s persona rather than simply a location. To what extent was that intentional?

A hundred percent. Essentially, we used the Planet Hollywood in Las Vegas as a basis for our casino. We went and scouted every casino up and down the strip then decided that was the one we wanted for its view. Not only did they let us shoot there to get plates but allowed us to modify their exterior with VFX. My inspiration there stems from the term parasitic architecture, which is where you take something old and push something new through it. What we wanted to do was take old Vegas and literally take a shard of glass and force through fragment through the old façade. Randall Flagg is right at its apex and there is a whole connection between that window and what we call the oculus below him. Then there are a series of rings which lead down to the interior which are basically a chandelier above the pool. It is called inferno in the story, but my inspiration for that was literally Dante’s Inferno. When it was decided this casino would be called Inferno, I thought maybe it would have been better to come up with something which didn’t hint at exactly what it was.

That is where the inspiration really came visually, where you had all these different levels. You have the poor slaves on the bottom level forced to fight to the death, then those below who have to clean that up and then those who are left alone as long as they look up in adulation at Flagg. Even for those further up Randall Flagg is still forty floors above the most privileged amongst them. There is definitely intention there and we had a lot of fun with that space.

Now that you have seen episode five, that moment when Bobby Terry comes out of the penthouse and those doors explode and he goes down the elevator and is literally devoured by Flagg is wonderful. They shot a scene which really feeds into Flagg’s character, where he is drenched in blood having just eaten Bobby Terry’s face off and someone new walks in. He just shakes their hand and says ‘welcome to Vegas’.

There is stuff going on in the background of some shots that is definitely not for children.

There was a lot of craziness going on in those shots and the director of those two episodes Chris Fisher had so much fun with it. When he came on set, he said ‘this is the best day of my career, this is amazing’. Mainly because he’s got two hundred and fifty half-naked people doing whatever he wants. It was a lot of work to get there, but when we did it was really fun to see. 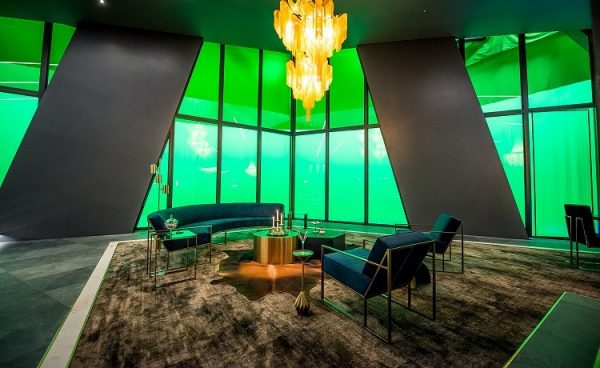 Having worked primarily in film what prompted your move into something television based?

This is interesting because it’s not quite television and not quite film. Long-form entertainment gives you the opportunity to do something on a scale you can’t do in film. I think my reason for doing that was the same as a lot of other writers and directors, in that I wanted to tell a story over twelve hours. Of course, there are limitations to what you can do but we really tried to look at the whole story and realised there were things which needed to be big, while others focused solely on character. The world of Colorado and Boulder wants to feel simple and populated by real people. Whereas Flagg’s world needed to be flashy and over the top to illustrate how he is enticing others into his world.

Essentially that architecture is meant to reflect the same thing he does with human characters. He takes somebody like Harold or Nadine at their most vulnerable and inserts himself in an attempt to enforce his will upon them.

On a broader level what attracts you to any given project, is it the complexity of the source material or world building on a budget?

I think it’s the world building which always challenges me. When I first came onboard, I wasn’t sure there was going to be enough meat to make a really challenging world. However, the more I read into it and realised what we could do I thought this would be fantastic. I came around in the end and we finished up with something like two hundred and thirty sets and locations, over a hundred and twenty shoot days. It was a long slog and I have never had anything quite like that.

If you had a choice between an unlimited budget and no time, or unlimited time and no money which would you choose?

I can actually argue both of those because I feel like having all the money in the world can be a gift, purely because you can do anything. You hire fifty artists and say let’s just do this, but then you have to build it all and make it feel real. However, if you don’t have enough time details can get missed. So much of a big-budget production can be lost in those little details that make things real. There are so many details in our world of The Stand for instance, that no one will ever see. Like the specific order of the books and DVDs on your bookshelf or the contents of that bookshelf. There are little Easter eggs from the entire pantheon of Stephen King throughout this whole series. You wouldn’t notice unless you looked, but every graphic, every sign and every street we could has some reference embedded in it. However, with no time and all the people in the world that would never happen.

On the other hand, if you have all the time in the world but no money you get increasingly myopic on little details and miss the big picture. My compromise there is that whenever I start on a ‘blue sky’ project within a world, it is important to find the boundaries of the box. We have to throw all these ideas out there until they provide us with structure. Once a world is bound to rules and a visual language then it can feel real and cohesive.

Yesterday was perfect and I went to the sand dunes with my two little boys, then rode boogie boards down the dunes and took pictures. Made little movies and that is a perfect day.

Many thanks to Aaron Haye for taking the time for this interview.

The Stand is currently airing every week on Starz in the UK and on CBS All Access in the US.