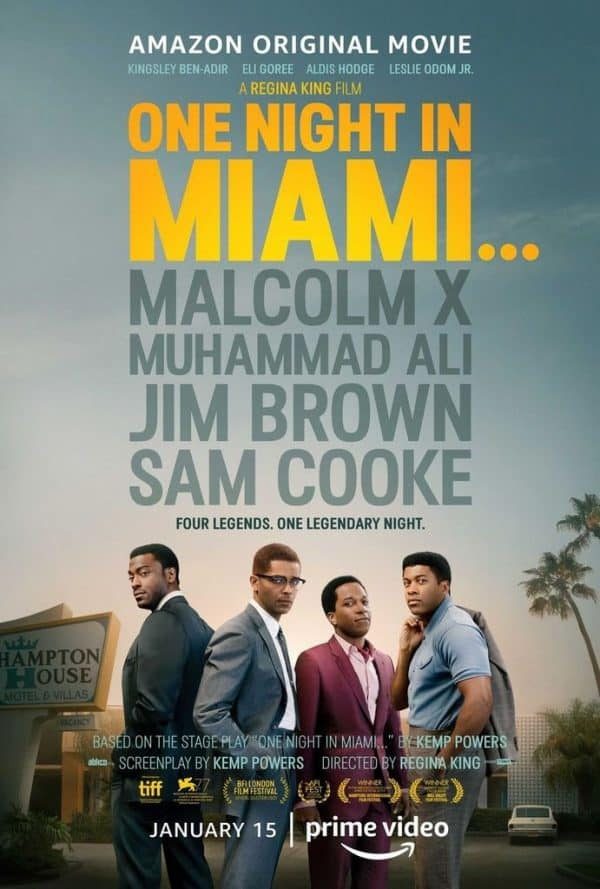 One Night in Miami is a fictional account of one incredible night where icons Muhammad Ali, Malcolm X, Sam Cooke, and Jim Brown gathered discussing their roles in the civil rights movement and cultural upheaval of the 60s. 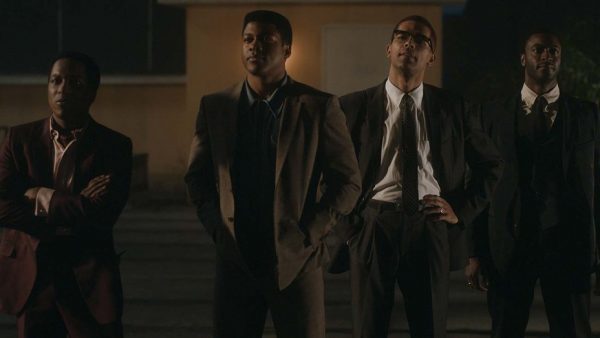 For anyone coming into Regina King’s One Night in Miami (having really only helmed TV movies up until this point, adapting the stageplay and script from Kemp Powers feels like a natural evolution for her as a filmmaker) concerned that the narrative might buckle under its own weight of Black legends, rest assured that the filmmaker not only reserves ample time for chilling and clashing worldviews, but also enough time to establish smaller arcs so that when the time comes there is a strong sense of where these opinions come from.

There’s an aside where the newly crowned boxing heavyweight champion of the world Cassius Clay (Eli Goree) connects his persona to that of professional wrestling heel Gorgeous George. Now, the two sports (yes, I’m aware one of them is scripted but there’s undeniably an entertainment factor to both of them) have always felt close, but it’s fascinating to hear a fighter that would go on to be arguably the greatest of all time buying into the concept of playing to the crowd in regards to racism. It’s the 1960s and racial prejudices are dangerously alive, so hearing Cassius Clay tap into that inexplicable hatred as the guy they will pay money hoping to see battered into a bloody pulp as an endorsement is a ballsy and endearing display of showmanship and bravado. 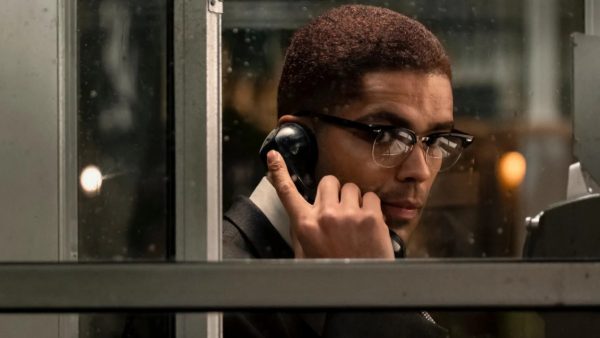 Then there’s singer Sam Cooke (Leslie Odom Jr.) who would go on to be known as the King of Soul, here figuring out his own identity as an artist pandering to white people performing at the Copacabana. He is bombing on stage and not necessarily sticking to his strengths, whereas plenty of those aforementioned Caucasians are happy to leave when he takes the stage. That’s not to say the choice is definitively grounded in racism, but what is for certain is that Sam Cooke – continuing along with the wrestling analogy – is not winning over the crowd as a babyface.

However, at least he’s in a position not answering to white higher-ups or having his artistic ambitions decided for him unlike say star NFL running back Jim Brown (Aldis Hodge). The athlete is assuredly celebrated, but respect is another matter entirely. He’s reminded of that after rising early and heading over to Mr. Carlton’s (Beau Bridges) home to discuss the future of his career, and it’s a conversation that goes well until Jim offers to help move some furniture. From there he is reminded Black people are not allowed in luxurious homes like his. Black athletes may be cheered on and even empowered by a rip-roaring audience, but it’s an exchange that seems to reinforce their supposed use as tools for success rather than actual human beings. Their contribution to a team is something for white people to revel in, for sure, but as Jim puts it himself, it’s also more like some white people patting themselves on the back with halfhearted gestures of approval. 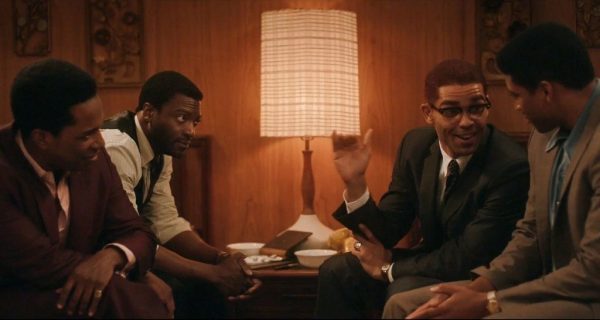 Rounding out the quartet of iconic mainstream Black historical figures is Malcolm X (Kingsley Ben-Adir), civil rights activist and spokesman for the Nation of Islam looking to convert Cassius Clay under the thinking that thoughts and words are just as powerful as moves in the ring. Malcolm also serves as both instigator and supporter as these four legends find themselves inside of a dumpy hotel room discussing not only the movement itself but their roles in it as both people and celebrities. It’s where One Night in Miami takes itself away from the bright lights of stadiums and boisterous crowds, settling into a compelling study of what really matters; the most effective ways to use that celebrity status in support of Black people all over.

Confrontational and controversial, Malcolm challenges Sam’s music career, Cassius is charmingly showy and cocky with brilliantly timed moments of insecurity on the choices he is making, Jim weighs the pros and cons of becoming a Hollywood star, and Sam has to do some inner searching on what he wishes to convey with his lyrics. Eli Goree gives the flashiest performance perfectly embodying the showmanship of Cassius Clay, but it’s newcomer Kingsley Ben-Adir that’s most electric as a paranoid (Malcolm has security guards and thinks the FBI is eavesdropping), forward, and somewhat cynical activist a bit high on himself that the only road to change is through his vision. One Night in Miami is more than just four legendary larger-than-life figures with their minds emphasized more than individual talents, it lays all of their thoughts out on the table subsequently reassembling it into a more unified voice and cause. And while I can’t speak on the specifics of what should be done considering I’m not Black, I will say sides with common ideologies and goals need to communicate with one another in similarly challenging dialogues; it’s either work towards getting on the same page or further division. 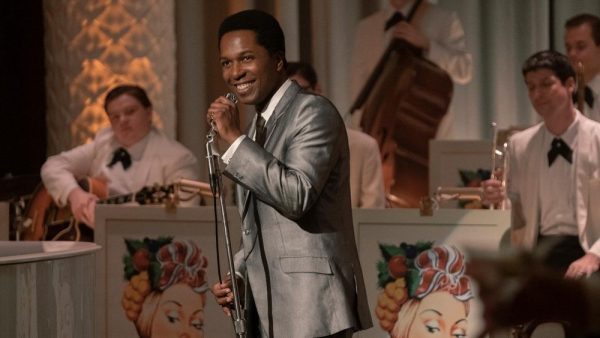 It’s occasionally a bit too theatrical for its own good with some characters and events in the background that don’t fully add anything to the story as seemingly intended, listed to excellence by the four outstanding central performances. There’s no reason brilliant voices can’t come together strengthening collectiveness and their own identity. One Night in Miami is described as a fictitious interpretation of what went on in that hotel room, but it’s not hard to accept the reality that these trailblazers shaped one another as much as themselves