A few months after releasing its first season [read our review here], Transformers: War For Cybertron is back with the second chapter of its trilogy, Earthrise. The second season builds off the first by delving further with the character development, exploring the choices Optimus Prime and Megatron have made that have brought their civilization to the brink of collapse. Though the story isn’t quite as fast-paced as Siege, it is still entertaining with its characters, action and plenty of nods for longtime Transformers fans to other aspects of the mythology as well as where the series may head next.

Siege was a darker interpretation of the Transformers franchise than most as it didn’t shy away very much from the destructive cost the war between Autobots and Decepticons had on Cybertron. Earthrise continues the dark trend of the series and takes it even further with the situation on Cybertron, showing how debilitated it and its inhabitants have become in the time since Optimus took the Allspark, Cybertron’s source of life, offworld. It is a very bleak setting with only a handful of Autobots left and Megatron using his surviving Decepticons in some very cruel ways believing the ends justify the mean for Cybertron’s survival.

The season covers two plotlines as it follows Elita-1’s small resistance on Cybertron and Optimus Prime’s journey among the stars to find the Allspark. The two stories start out fairly balanced, but Optimus’ storyline pulls more focus in the latter half of the season once Megatron catches up with him. The pacing is well done for the most part, but it slows a little once the Autobots and Decepticons reunite and features a somewhat jarring detour in the fifth chapter. What is interesting though is the worldbuilding in the season as more characters and concepts are introduced like the Mercenary faction, a group of bots who are neither Autobot or Decepticon, and Cybertron’s former rulers and slavers the Quintessons. It really opens up aspects and backstory from Siege that were only hinted at, allowing a greater scope of Transformers: War For Cybertron to be seen. The show puts a new spin on some of these elements that are both intriguing for new viewers and nice nods for longtime fans while making some intriguing teases for what may come in the next season.

One of the positive aspects to Siege was the character work and thankfully Earthrise continues to develop them in interesting ways. Characters such as Elita-1 and Jetfire are elevated into a bigger leadership positions than they typically are in other Transformers media while bots like Bumblebee and Starscream slip more into their traditional roles as faithful soldier and untrustworthy opportunist respectively. Even the larger cast is more consistent this time around as the groups of Autobots and Decepticons are fixed instead of rotating characters in and out depending on the story purpose. While Bumblebee, Shockwave, Starscream and others may get more fleshed out, this is still centred on Optimus Prime and Megatron. The two opposing leaders get far more depth than any of the other characters, something that is both a positive and negative as it pushes other characters to the side in favour of them. 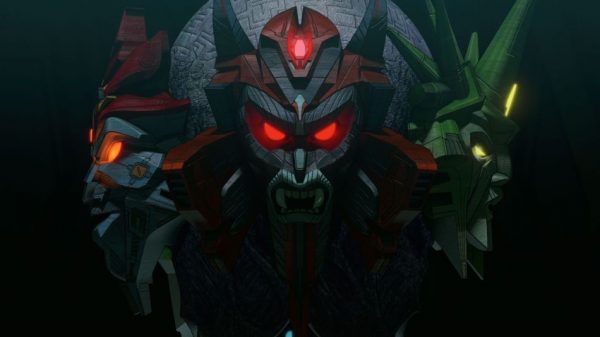 That being said, though, the development Optimus and Megatron are given nicely builds off their relationship in Siege. Whereas in the first season the two were former friends turned rivals who still felt some amount of kinship with the other Earthrise transforms (no pun intended) their rivalry between mortal enemies. It is particularly telling when Megatron has ‘ruled’ Cybertron and begins sacrificing his own Decepticons’ sparks and energon in order to keep Cybertron on life support, but then drops everything the moment he hears Optimus Prime is still alive. From there interesting parallels are made as to how Optimus and Megatron need each other, particularly more for Megatron as Optimus provides the perfect foil for his Decepticon campaign, otherwise he would just be labelled as a true tyrant by his own people. As much as it explores Megatron’s slide into complete villainy, so to does it examine Optimus’ guilt at the devastation he helped unleash on Cybertron and what it has done to their race. Yet steps are also taken to bring both of these characters into their classic roles with Optimus as the ever-confident and heroic figure and Megatron the wannabe despot.

The action sequences are pretty entertaining and still as gritty as the previous chapter, though the action is far more spaced out than in Siege as well. It makes a bit more breathing room between all the intensity and allows those character moments to really shine though. The animation during the battles are also improved by making the movements more fluid during battles, though there is still a clunkiness to them in some scenes where characters go hand-to-hand. The voicework is still good, but some of the characters still speak a bit too slowly, most notably Jason Marnocha as Megatron when he’s not giving a passionate speech to his Decepticons or Optimus. 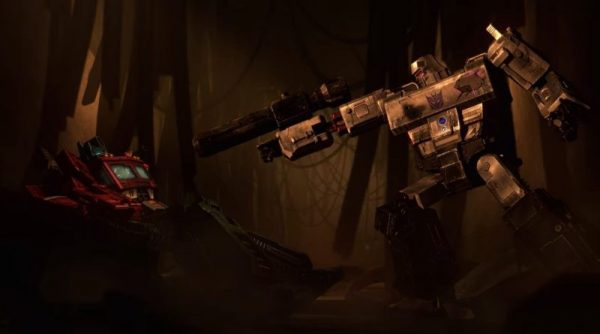 Transformers: War For Cybertron Trilogy – Earthrise builds nicely from Siege, taking its most interesting aspects and expanding them through the characters and worldbuilding. The action and animation are well designed if a little stiff at times, but overall fans of the franchise should appreciate the character work put into Optimus Prime, Megatron and others through the more serious take. Though this chapter ends on much more of a cliffhanger note than Siege, there are some exciting teases for what is to come in Kingdom that harken back to established elements in Transformers lore and, of course, the fan-favourite Beast Wars.