Wargaming, developer and publisher of the popular series of MMO historical battle games, has announced the release of the first update of 2021 for their naval combat game World of Warships.  From today, ship commanders will be able to celebrate the Lunar New Year with new themed content, updates to commander skills, clan brawls and a continued construction of the Kure dockyard. 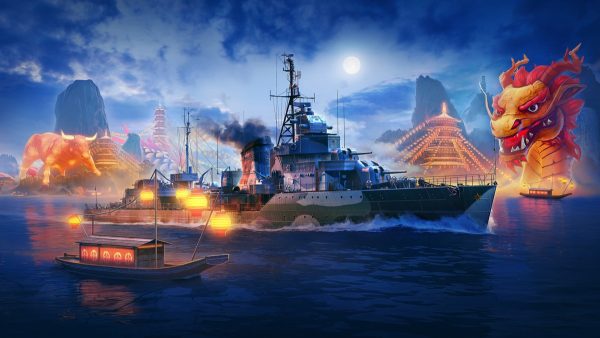 This year’s Lunar New Year celebration event will challenge players to complete combat missions in order to earn “Journey to the West” and Lunar New Year containers.  These containers will contain a variety of rewards including Pan-Asian ships, permanent camouflages and more.  The ships, commanders and camouflages featured in this event are named after the heroes of the Chinese novel ‘Journey to the West’, and include former celestial General, Sha Wujin; Tang Sanzang, a Buddhist monk; the Monkey King, Sun Wukong and the sorcerer, Zhu Bajie.

This latest update also brings big changes to the Commander Skills system which will provide players with a wider choice of effective battle builds that will cater for different styles of play.  Players will find that all commander skills will automatically be redistributed using a recommendation system.  These will provide an effective build for each specific ship but can be reset free of charge.

Other changes to skills changes include:

Until the end of Update 0.10.0, players can continue to build the Kure dockyard by completing Shipyard combat missions and progress through 22 out of 26 shipbuilding phases.  Phases will also be able to be purchased using dubloons.

With the new update, players will be able to take part in the 14th and 15th Clan Brawls, which will take place on the 27th January and 1st February respectively.  These will be fought in a 7 vs. 7 format and will be open to all players even those not in a clan.

Log in to World of Warships, check out the changes for yourselves and take part in the Clan Brawls at the end of the month.