In rural 19th-century France, a mysterious, possibly supernatural menace threatens a small village. John McBride, a pathologist, comes to town to investigate the danger – and exorcise some of his own demons in the process. 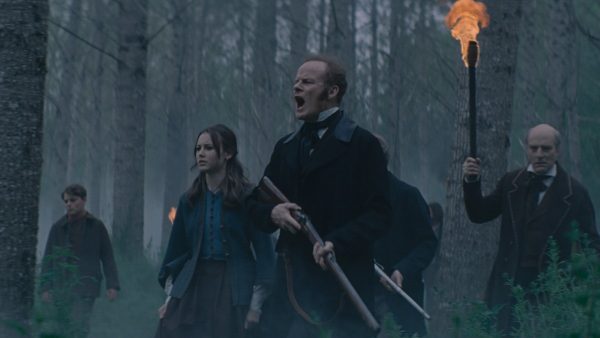 While the post-Twilight era ushered in an abundance of inventive and left-field vampire films, werewolf cinema hasn’t ever really had the same reactionary, watershed moment. But Sean Ellis’ (Metro Manilla, Anthropoid) Eight for Silver does just enough tinkering with the prototypical lycanthrope formula to deliver an entertaining time, in spite of its excessive length and oft-plodding pace.

Ellis’ film opens with a 35-years-later frame narrative set during 1916’s Battle of the Somme, where a soldier, Edward Laurent (Alun Raglan), succumbs to his war wounds just as a silver bullet is pulled from his body and then sent back home to his family in France. The remaining 98% of the story transpires back in the late 19th century, where Edward’s industriously violent land baron father Seamus (Alistair Petrie) slaughters a gypsy clan who have a legitimate legal claim on his family’s land.

But the gypsies don’t go quietly, one of their number unleashing a curse upon not only the Laurent family – including young Edward (Max Mackintosh), his sister Charlotte (Amelia Crouch), and their mother Isabelle (Kelly Reilly) – but the entire surrounding village.

This leads to the locals suffering horrendous nightmares of the massacre, and after a series of slightly convoluted circumstances, a werewolf-adjacent infection spreading throughout the village, ultimately causing Edward’s disappearance. And so, it falls to pathologist John McBride (Boyd Holbrook), who has an extremely personal motivation for hunting the creatures, to find Edward and save the village from annihilation.

Despite its chilly mood and slow tempo, Eight for Silver is not a film much interested in subtlety, its thematics concerning white colonialism and the sins of the father quite literally spoken aloud by various characters throughout.

But where writer-director Ellis most intrigues is with his decision to treat the werewolf(ish) infestation like a virus, quite literally using the word “pandemic” and making passing mention to both the closure of trade routes and primitive forms of lockdown. Though any allusions to COVID-19 are of course entirely coincidental, it may nevertheless give audiences a perverse crackle – or. just as likely. kill their sense of escapism entirely.

By making his creatures not-quite-werewolves but rather their fleshy, pallid, hairless distant relatives, Ellis is able to give them a totally unique biology that still feels lovingly indebted to the classic body horror films of yore. Once someone’s bitten by a creature, they begin to manifest tendrils from their body which soon enough encase them inside a grotesque, monstrous chassis, from which they can technically be freed yet will never be the same.

Ellis has proven himself a highly capable stylist in his prior works and that serves him well here, impressively working as his own cinematographer for the third film in a row. His muted, earthy colour palette supports the film’s generally bleak, humourless tone, even colour-timed to within an inch of monochrome in some scenes as it is.

If a gorgeous early locked-off, unbroken take of Seamus and his men sacking the gypsy settlement from a distance suggests two hours of grim restraint, this is no such film. Ellis packs his jaunt with nauseatingly realistic gore, where limbs are mercilessly hacked off, people are ripped apart, and mangled body parts are shown with a lingering gaze. Courtesy of some strong practical effects work, gorehounds should have a blast (everyone else, less so).

It’s a shame, then, that Ellis’ visualisation of the creatures themselves is a good deal spottier, routinely employing rapid cutting and awkward framing to keep them disguised during attacks, presumably an attempt to downplay the relatively wonky visual effects apparent when we briefly do get to see them.

It’s also tough to advocate for the film’s 113-minute runtime; a slow delivery of a straight-forward premise is always a risk where genre films are concerned, and may leave the target audience periodically fidgety. It is, at least, dripping in atmosphere in even its more glacial moments – particularly an overextended but unexpectedly affecting finale.

It would certainly be better for losing 20 minutes – particularly its excess of on-the-nose nightmare sequences – but abetting the sharp style is the efforts of a solid cast. As our monster-hunting hero McBride, Boyd Holbrook is entertainingly stoic, offering up an impressive English accent even if, like most of the other accents featured, it absolutely belies the film’s French setting.

Alistair Petrie, ever a dab-hand at playing uptight, obstinate assholes, is meanwhile perfectly cast as Seamus, the closest thing the film has to an out-and-out villain, though between Ellis’ nuanced characterisation and Petrie’s performance, he’s nowhere near the cartoon he could so easily have been. Kelly Reilly is criminally underutilised here as Seamus’ wife Isabelle, but does her level-best to wring as much quiet anguish from the part as possible.

Moody but scattershot, this schlocky-classy retooling of the werewolf movie doesn’t achieve its full ambitious potential, but between Ellis’ stylish eye and a game cast, it does just enough.