Written and directed by Salomé Jashi. 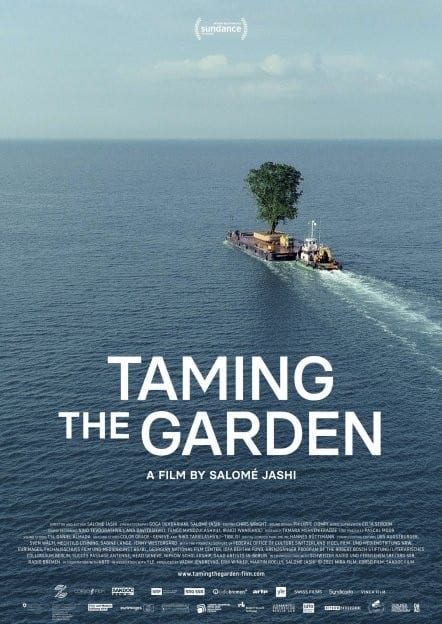 Documentary follows trees that are transported, at great expense and inconvenience, from the coast of the Republic of Georgia to the private garden of that country’s former prime minister. 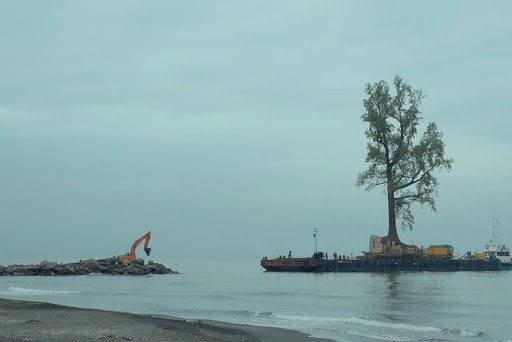 Documentarian Salomé Jashi captures environmental disarray in a singularly startling – if extremely methodical – manner in her new film Taming the Garden, centered around a man’s inexplicable efforts to remove gigantic trees from a small Georgian coastal town, haul them across the Black Sea on a barge, and re-plant them in his own palatial complex miles away.

The man, referred to only as “Ivanishvili” throughout, is in fact Georgia’s former Prime Minister Bidzina Ivanishvili, who with an estimated net worth of $6.4 billion is the nation’s richest person. But Jashi intentionally puts little paid to the man’s identity beyond the casual utterances of his name by the locals, focusing instead on the staggering, repugnant force of effort required to accomplish his bafflingly decadent vision.

Jashi quickly announces herself to be a minimalist, observationalist filmmaker, with not a single word being spoken for the first seven minutes of this boots-on-the-ground document. And even then, the story is told almost entirely through the off-hand banter of both Ivanishvili’s labourers and the town’s exasperated locals.

Truly, the tree relocation project is the sort of mad feat that’d make even Werner Herzog, the man who famously dragged a real steam-liner over a mountain in Fitzcarraldo, blush. Yet any temptation to find perverse amusement in the sheer stultifying ambition of such an act is quickly quelled by its clear grossness. Yes, Ivanishvili pays the owners of the trees for their removal, though in the process drastically alters the surrounding landscape. When one subject asks what he’ll do once he has all the trees, another retorts, “He’ll go after the birds.” 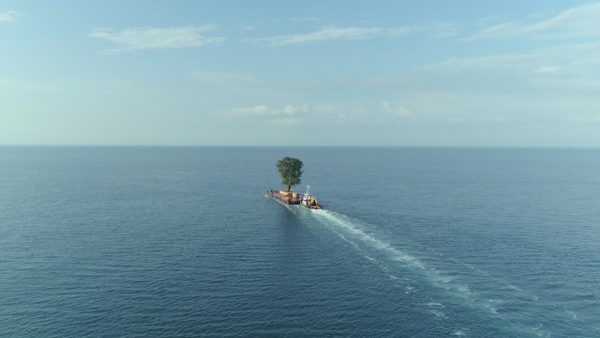 In an almost willfully tedious stead, Jashi’s film is intensely focused on the literal machinery of the industrial process, devoting much of its runtime to close-ups of expensive mechanical equipment struggling to operate in an environment it clearly has no business being. The heft of man-power required to remove even a single tree, over a number of months no less, begs one to ask what would drive someone to these ends. Boredom? A vulgar display of power? Or simply a man seeking to spend some of the money he has way too much of?

We of course never meet the man responsible to get an answer, Jashi opting instead to zero-in on the destruction caused by his pricey whim. Long, locked off shots are fixated on nature being hacked away, almost like an unassuming snuff film. One middle-of-the-night sequence, as twigs faintly glisten amid busy workers’ flashlights, even evokes The Blair Witch Project, believe it or not.

Seeing the surrounding forest so thoroughly levelled so a single tree – a huge one, admittedly – can be removed is shocking, painting a powerful picture of just how devastating human interference can be. The next morning, the workers indifferently pick up the detritus caused by the vehicular behemoths steamrolling their way along the forest road.

Though Jashi doesn’t speak to the man at the top, we do hear a fair range of perspectives from those living in the area. More than a few locals express gratitude to Ivanishvili for paving roads through an otherwise treacherous patch of land while fetching the trees, with one man even calling the environmental concern “ungrateful” for what he has given the town. 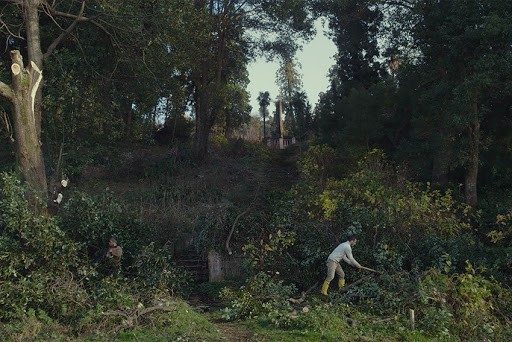 Other, older residents, however, are visibly distraught at seeing trees planted by themselves, their parents, and even their grandparents cut down and taken away. Some threaten direct, violent action against him if he continues his industrious effort to seemingly uproot a large portion of the surrounding forest.

Despite the clear desire not to grant oxygen to the man or his motives, Jashi does concede to provide viewers with a brief closing glimpse of the biggest tree’s impressively lavish resting place, perhaps only to foreground the unsettling disparity between him and the community he took the tree from, no matter what he paid.

If this film’s intentionally glacial pace likely won’t let it play far outside of environmentalist enthusiast circles, there is a hypnotic quality to the images – especially a gorgeously bizarre drone shot of a tree on its barge en route to its final destination, proving at once strangely beautiful and hauntingly sad. Aurally, the creaking and groaning of the forest is juxtaposed against the unpleasant grind of machinery, punctuated by occasional soothing music, comprised of plucked guitar strings and pan flutes.

If Jashi’s perspective might initially seem “objective” and non-critical, there’s really only one conclusion viewers are likely to draw by film’s end. The not-so-quiet violence man commits against nature becomes a visually arresting, mind-boggling spectacle in this memorable fly-on-the-wall documentary.