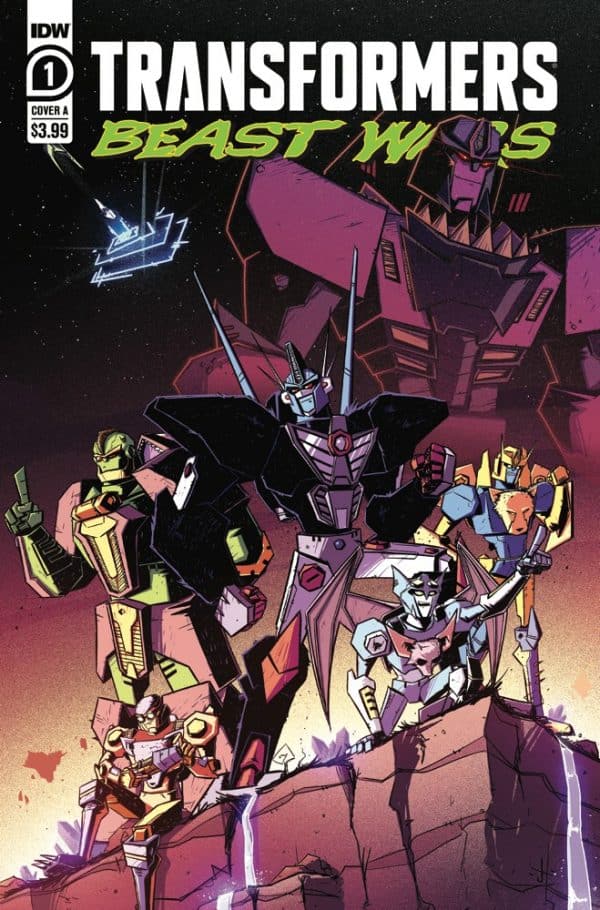 This year marks the 25th anniversary of Beast Wars: Transformers, one of the first fully computer-animated TV series to premiere and is largely responsible for revitalizing the Transformers franchise after a number of years where it was mostly dormant, especially for North American fans. To celebrate, IDW has begun Transformers: Beast Wars, a new comic series based on the classic cartoon that looks to follow the show while developing new layers to the story. Based on the introductory issue from writer Erik Burnham and artist Josh Burcham, Beast Wars is in very good hands.

The first thing that becomes apparent when reading Beast Wars #1 is the expansion of the story. Whereas the first episode of Beast Wars jumped right into it as the Maximals and Predacons fought before crash landing on a mysterious planet, kicking off the need for beast forms right away, Burnham’s introduction provides a bit more backstory to the events leading up to the start of the series. We see Megatron’s theft of the Golden Disk, the Maximals aboard their ship and other things leading up to their crash landing. The new backstory helps establish this re-telling of the Beast Wars story and adds new elements to it. The fact that ‘Megatron’ is not actually Megatron’s real name, but the one he bestowed upon himself to both honour the infamous Decepticon leader and declare his ambitious desire for leadership of all Predacons – as well as Cybertron – is a nice character moment for Megatron that is perfectly in keeping with his egomania from the animated series.

The second aspect that is apparent almost immediately is how well Burnham captures the voices of each character. From Megatron’s eloquent way of speaking (and his use of the word ‘yes’), Rattrap’s sarcasm or Rhinox’s wisdom, each of them sound like their animated counterparts enough so that it is very easy to even hear their voices along with the dialogue. All of their essential characteristics are there, though Burnham gives Optimus Primal an interesting change where the Maximal leader seems a little younger and more of a fresh captain than an experienced soldier and explorer. The Optimus of this book has more of a desire for adventure and makes a point of thinking outside the box, a fact the Maximal command apparently doesn’t like and wants him to stop. The change doesn’t alter his character much and Optimus Primal still sounds very much like his cartoon self.

Burnham’s script is fast-paced and sets the story and characters well. He even introduces two new transformers to the mix with Nyx and Skold, the former being a new Maximal whose design is based on the original Optimus Primal toy and the latter a whole new Predacon. Nyx and Skold don’t have much to do in this issue, but Nyx does establish herself as a capable pilot with an interesting dynamic with Rattrap and Cheetor. The events follow the main beats of the opening minutes of Beast Wars, but with some of the slight changes to the characters and story Burnham doesn’t seem afraid to change the overall story where necessary for new and old readers, a fact he confirms in his bonus interview at the end of the issue. It definitely launches an intriguing starting point for fans.

Josh Burcham handles the art duties here both illustrating and colouring the artwork and does a fine job. His renderings of the bots’ Cybertronian forms is creative yet still makes them recognizable to what will be their later forms. His style is pretty animated and fluid, such as with the fight at Cybertron’s science centre or Optimus and Rhinox’s training session. His facial work is pretty good, giving the Maximals and Predacons very emotive expressions. As to his colour work, the issue is very vibrant with a great mix of colours, especially on the bots as each of their appearances stand out from the other. Burcham also includes quite a few nods both to the larger Transformers mythos as well as past Beast Wars material such as old toys, other comics and even mimicking the show’s intro during the crash landing and other storylines from the series.

With Burnham’s handling of the characters and story and Burcham’s artwork, Beast Wars #1 is a great and entertaining introduction to IDW’s latest Transformers series. There is enough elements that are familiar for longtime fans with teases for diversions while completely new readers will be interested in this new iteration of Transformers. It is well worth checking out whether you love Beast Wars or are fresh to it.